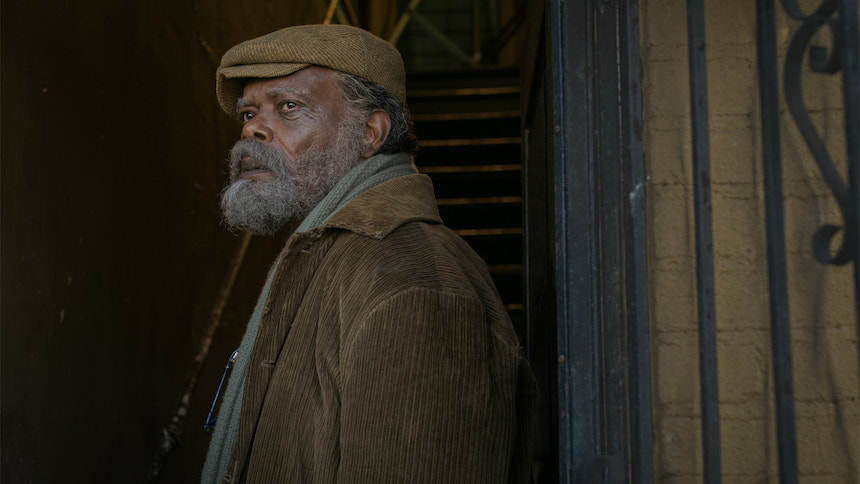 Do you remember what it's like when you fall asleep?

Ptolemy Grey is 91 years of age and already descending toward the grave.

Living in a squalid apartment in Atlanta, Georgia, Ptolemy's day-to-day existence is driven by his decrepit body's fundamental needs for survival: something to eat and something to drink. His beclouded mind has been ravaged by dementia, to a pitiable degree. His only visitor is his grandnephew Reggie (Omar Benson Miller), who kindly cares for Ptolemy's needs to the extent that he can.

One day, his grandnephew disappears under mysterious circumstances, leaving Ptolemy (Samuel L. Jackson) adrift in an uncaring river that is rushing toward the sea without him. He ends up in the care of Robyn (Dominique Fishback), 17, who has experienced troubles of her own. She is kindly empathetic and understanding of his many limitations, well beyond her tender years.

Ptolemy and Robyn form an unlikely, utterly beguiling relationship that deepens into something that connects them on a much deeper level than surface appearances might indicate. Soon, they learn that Ptolemy's nephew arranged for experimental treatment that might help the shambling old gentleman regain his memories, if only for a short time.

What will they do? Somehow, Ptolemy becomes convinced that the treatment might help him solve a puzzling mystery that has haunted him for many years. He has no choice, really.

Walter Mosley's debut novel, Devil in a Blue Dress, published in 1990, is a marvelously complex mystery, set in 1948 Los Angeles. It's built around an ordinary man, war veteran Easy Rawlins, who displays adept skills as an investigator, finds a missing woman, and by the book's end, decides to become a private detective. The novel introduces a raft of vivid characters, coming to life amidst evocative backgrounds, while also tying in historical details. Mosley spins a tale that becomes more gripping as it progresses. In simpler words, it's a gripping page-turner.

Mosley's storytelling skills have become legendary over the past 30-plus years. I've only read a few of his books so far, but each has been a marvelous read. Adapting his own novel, published in 2010, Mosley has crafted what would have been called 'a novel for television' back in the 1970s.

The Last Days of Ptolemy Gray is thick with dense layers of contradictory mysteries, especially in the first two episodes, the first of which was expertly directed by Ramin Bahrani (Chop Shop, The White Tiger). Creating the series, and writing or co-writing each episode, Mosley lays the groundwork in novelistic fashion, establishing Ptolemy and his confused perspective before unpeeling more and greater mysteries.

As the series progresses, we learn more about Ptolemy and Robyn, their respective family members, and the traumatic experiences that have shaped them. We also learn about a devastating murder and the mystery that surrounds it, and why Ptolemy becomes obssessed with solving the crime before his memories take flight and leave him alone forever.

As I grow older, few things frighten me as much as losing my memories. Mosley and the creative talent in front of and behind the camera capture the fear as well as anything I've ever seen before (that I can recall). Samuel L. Jackson and Dominique Fishback embody their characters with uncommon empathy and perceptive understanding, supported by a very able supporting cast, notably Cynthia Kaye McWilliams as the alluring Sensia and Damon Gupton as the heroic Coydog. Walton Goggins displays a welcome measure of respect and gravity as the doctor in charge of the experimental treatments.

Weighing in at six episodes, The Last Days of Ptolemy Grey may not always be pleasant to behold, yet it's completely absorbing to sink into and reflect upon.

Do you feel this content is inappropriate or infringes upon your rights? Click here to report it, or see our DMCA policy.
Apple +Cynthia Kaye McWilliamsDamon GuptonDominique FishbackSamuel L. JacksonUSWalter MosleyWalton Goggins