Pablo Schreiber and Natascha McElhone star in the series, debuting on Paramount Plus. 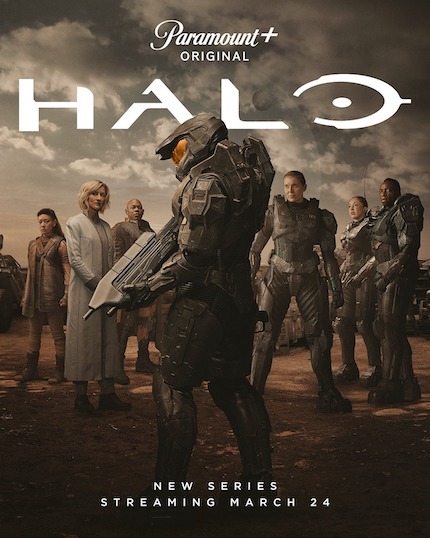 Bizarrely, the show starts with talk, talk, talk. For five minutes. Then the action begins.

Halo
The first episode of the series is now streaming on Paramount Plus. New episodes will debut every Thursday.

Playing very much like a pilot episode for a broadcast television series, Halo stakes out very familiar territory. Five hundred years from now, humans will still be talking like the writers' room of a television show: joking, joshing, and boasting about their supposed skills and imagined talents. Then they'll go outside and kill somebody.

The ragtag group of jokers is living in a rebellious settlement on a colonial desert planet that comes under attack by giant humanoid creatures, resembling jumping, upright frogs, who are then defeated by a military unit of mechanically-enhanced soldiers known as Spartans, led by stoic Master Chief (Pablo Schreiber). The Spartans recover a mysterious relic, as well as the sole survivor of the massacre, feisty Khan (Yerin Ha), who saw her beloved father killed, and head back to their base on another planet.

Before they get there, Dr. Catherine Halsey (Natascha McElhorne) gets excited by the reputed power of the mysterious relic, though her boss, Admiral Parangonsky (Shabana Azmi), is more concerned with Master Chief recovering some memories -- shades of RoboCop -- and disobeying direct orders. From the home planet, Dr. Miranda Keyes (Olive Gray) tries to convince the rebel Khan to cooperate by recording a message rallying the remaining rebellious colonial planets to return to fealty against the larger, looming threat of the giant frog creatures.

When she refuses, the Admiral decides that Khan needs to be terminated immediately and then raises a general military alert when Master Chief ignores the order and appears to have become an imminent threat to the planet. Meanwhile, the giant frog creatures have a secret weapon, namely, a human who speaks their language and is working with them to -- oh, you get the point.

Director Otto Bathurst is known for helming sharp, moody, episodic series (Peaky Blinders, Black Mirror), but the choice here, evidently by Kyle Killen (Lone Star, Mind Games) and Steven Kane (The Last Ship), who are credited as developing the series and together wrote the first episode and are producing, is to present events like a typical broadcast series, complete with the kind of flat lighting that does nothing to create any sort of distinctive atmosphere.

Combined with elements that are freely borrowed from other sci-fi shows set in the future, Halo looks like a trial run that ran out of gas about halfway through. I'm not sure what happened; the visual effects are good, the action sequences are well staged and executed, and the dramatic performances are all that could be expected.

A feature-film adaptation of the video game stalled out some years ago. The current series has been in development since 2013, finally catching fire in 2018 when Killen came on board and leading to the current version, originally heading to the premium cable network Showtime before it was redirected to the Paramount Plus streaming service.

Nine episodes are scheduled for the first season, and a second season is already in the works. As an eternal optimist and die-hard fan of science-fiction films and television shows, I'm hopeful that the promising dramatic elements will soon bear more compelling fruitage.

Do you feel this content is inappropriate or infringes upon your rights? Click here to report it, or see our DMCA policy.
Natascha McElhonePablo SchreiberParamount PlusUS