Review: SEÑORITA 89, Learning to Be Queens Comes at a High Price

Ilse Salas and Ximena Romo star in a dramatic series, created by Lucia Puenzo, with Pablo Larraín on board as an executive producer, debuting on the Pantaya streaming service. 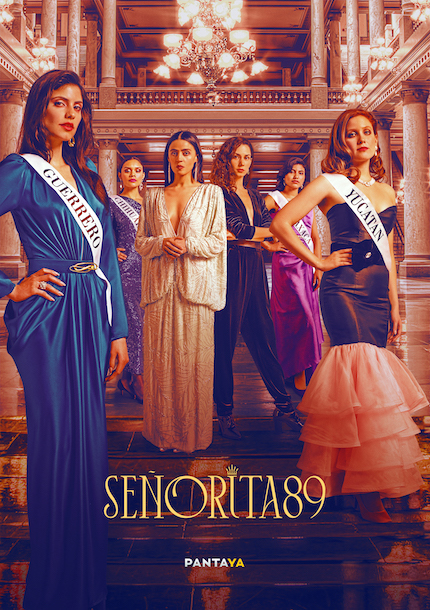 Like a slow-motion car crash, pain and suffering are inevitable.

The opening sequence of the first episode points toward a tragic conclusion, imbuing each scene that follows with a palpable sense of melancholy dread. A shred of hope then emerges, which kept me watching with rapt attention through to the end of the second episode, which is all that I've seen so far.

Set during a glamourous period in Mexico during the late 1980s, the eight-episode series rewinds a few months from the tragic event to see what led to it, beginning with the arrival of 32 women from across the country to a gorgeously-appointed estate in the countryside. They have all accepted an offer to receive three months of training in order to prepare fully for a national beauty pageant.

To an outsider without much abiding interest in such things, it sounds like a great deal. The women will be trained by experts in their respective fields, so they can learn how to apply makeup better, how to dress better, how to compete better, and, maybe, how to win the coveted crown. All they have to do is sign a multi-page contract and not have any contact with anyone outside of the estate for the duration of their stay.

If it all sounds too good to be true, then you've probably seen a movie or television show before. Despite the familiarity of the narrative device, I was still hooked with the intrigue because of the calm and clear method by which creator, writer, and director Lucia Puenzo, in collaboration with her co-writers María Renée Prudencio and Tatiana Mereñuk, and co-directors Nicolás Puenzo, Sílvia Quer and Jimena Montemayor, lay out the premise and its development.

The first episode, for example, revolves around Elena (Ximena Romo), who is preparing for a Master's degree at a university when she applies for a job teaching general knowledge at a national beauty pageant, Miss Mexico. Elena has greater ambitions than just a temporary position, though; she wants to study at the Sorbonne, and figures that by learning all she can from the 'inside' -- like Gloria Steinem working as a Playboy bunny -- she will be weaponized to speak from experience as she wages war upon outdated institutions like the beauty pageant.

To her surprise, Elena is hired on the spot by Miss Mexico boss Concepción (Ilse Salas) and heads to La Encantada, a family property belonging to Concepción and her husband. Elena is expected to educate the 32 contestants on their 'interior,' while their 'exterior' -- hair, makeup, fitness -- is handled by the other on-property instructors

As Elena learns her way around the large compound, which is protected by fences and armed guards, she endeavors to slip some anti-establishment thoughts to them in the guise of teaching them 'general knowledge.' The young women, though, who hail from different strata of society and varying levels of self-knowledge and self-identity, have their own ideas, which most are willing and almost eager to subjugate in order to escape from their places of origin.

The polished beauty routines and playful bathing-suited antics in the bodies of water that dot the property are embraced by some of the contestants, but not the ones who are suffused with anxiety and desperation. Concepción, her husband, and their team appear to prey on their intense appetites for escape, funneling it into more sordid activities that are disquieting and difficult to watch.

Serving as one of the executive producers, Pablo Larraín's name may capture attention -- it certainly caught my eye -- though the series is developing into its own singular experience. On its own merits, Señorita 89 deserves notice for its serious intent and dramatic ambition. I'd like to see how it all plays out over the course of its eight episodes.

Streaming notes: Available only in the U.S., the Pantaya streaming service is new to me. It describes itself as offering "the best Spanish-language movies," though it also offers a large number of Spanish-language dramatic and reality series, along with a number of original titles. I've only begun to explore what it has on tap, but it appears to have a fair number of genre titles, including the great Tigers Are Not Afraid.

So, it bears further review, and I've added it to my 'investigate more closely' file of intriguing streaming services.

Do you feel this content is inappropriate or infringes upon your rights? Click here to report it, or see our DMCA policy.
ChileIlse SalasLucia PuenzoMexicoPablo LarraínPantayaXimena Romo