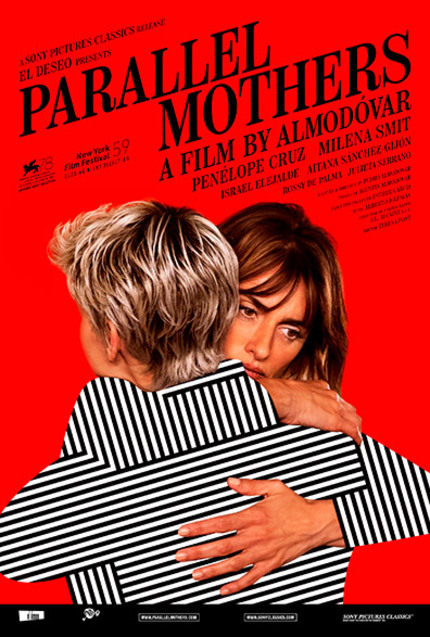 What makes a family, and what binds us to family, both in our lifetimes and with the generations before us? How important is biological connection, and how important is it to know what happened in the past? Can the truth bring us peace, or does that only come with justice, and/or forgiveness?

Pedro Almodóvar has often mixed the personal and the political, and he returns to both these arenas in his latest film, Parallel Mothers. Following one woman's story as she searches for, and then discovers, a terrible truth, he frames it around a larger question of finding the truth about the many people killed by the 20th century Fascist regime. What systems are in place for us to find the truth, the peace, the justice we need? And how much of that comes from blood, and how much from community?

Janis (Penelope Cruz) is a successful photographer in Madrid; she finds herself pregnant after a year-long affair with the married Arturo. She decides to raise the baby on her own, and meets teen mother Ana (Milena Smit). They form a bond, and after several months, pick up their friendship to support each other as single mothers. But before this, Janis learned a terrible secret, one that threatens to consume her.

The film opens with Janis telling Arturo (a forensic anthropologist) this history of her family, how some are believed to have been buried in a field, shot and killed by the fascist forces that ruled Spain for nearly forty years. These are old wounds that have cut through the generations, never properly settled as these crimes took too long to be even acknowledged, let alone recitfied and recognized as atrocities. Janis carries this pain, as does her family; it's bred into their bones.

Janis might not be exactly overjoyed to be a parent, but she accepts her pregnancy, and when the baby arrives, like most mothers, she is overcome with love. She knows who she is, but will adjust as she needs to this child. As she says to Ana while they are both in labour, 'it will all work out'. But will it? Janis has a support system available to her: a housekeeper, a nanny (even if she leaves a lot to be desired) and her agent and closest friend Elena (the marvelous Rossy de Palma, wonderful to see back with Almodóvar). Ana is at first not so lucky. Despite having financial comfort, her mother Teresa (Aitana Sánchez-Gijón) does not exactly exude warmth; it's not that she doesn't love Ana or her new granddaughter, but she keeps repeating how much she had to give up, and now that she has a chance to revive her acting career, she'd rather do on tour than help the new teen mom.

That leaves Janis not only mother to her baby, but a surrogate mother to Ana. Almodóvar returns to themes of the family that is made by those of no relation when other resources do not exist, or simply when people want to be together as a family in less-than-traditional ways. Ana moves in, and Janis teaches Ana how to cook, how to make a home (not just live in a house). For her part, Ana teaches Janis a bit of liberation. To this calm and loving household, Almodóvar (of course) injects his signature melodrama; perhaps letting the camera pan down a little too slowly, revelations that will shatter the lives of both her and Ana comes to Janis' knowledge, leaving her walking a tight rope of keeping her newfound happy home together.

Despite this melodrama, and of course Almodóvar's and his longtime art & production design team Alejandra Loiseau & Antxón Gómez's singular use of colour, this is on the filmmaker's more mature and contemplative side, as is befitting his later work. Somehow, we know things will be alright (as Janis says in the hospital). His long film relationship with Cruz means she gives a perfect Almodóvar drama performance - Janis adapts to each new curveball thrown at her; she may at first feel startled, overwhelmed, despaired - but she knows that dealing with it is the only option, even when dealing with a problem means blowing up her own life. Smit more than holds her own with Cruz and the other veteran actors, with a character unafraid to live her identity and express her pain.

That kind of endurance is expressed not only in the family that Janis and Ana create, but the lives of Spaniards who have endured generation trauma, who had to wait decades to see justice (and arguably are still waiting). Burial of the truth does not mean it will remain hidden; lies will be discovered, and it is better to face the truth, with the generations who have made you and the family made from friendship and mutual aid, rather than forced into silence and solitude. Parallel Mothers might not be Almodóvar's most groundbreaking work, but it is an homage to those who have forced the truth to light, for better or worse.

Parallel Mothers is currently playing in selected cinemas in the USA, and opens on Friday, February 11th in Canada.

Do you feel this content is inappropriate or infringes upon your rights? Click here to report it, or see our DMCA policy.
Pedro AlmodóvarPenélope CruzRossy de PalmaAitana Sánchez-GijónDrama