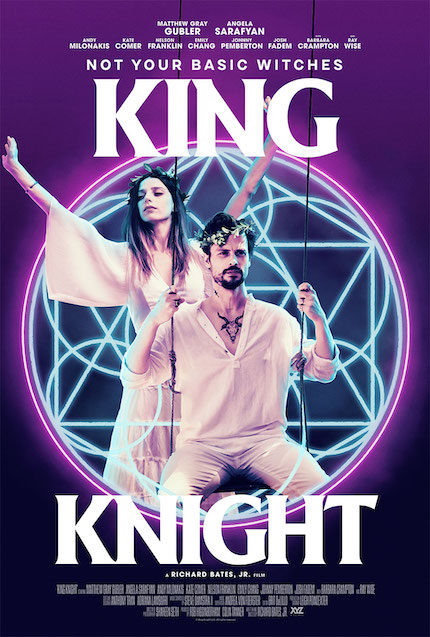 Thorn (Matthew Gray Gubler) has carved out a life in which he is very comfortable.

Living with his life partner Willow (Angela Sarafyan), Thorn leads a thriving – if riddled with neuroses – coven of suburban witches while simultaneously maintaining a presence on Etsy in the increasingly competitive artisan birdbath space.

Even though the birdbath thing can be frustrating, all in all, he’s living a pretty charmed existence. That is, until his past catches up with him and changes the way his coven views the Thorn they know, sending him reeling and in search of meaning in a world he’d left behind.

So begins the odyssey of the King Knight. Set adrift by those who once idolized him, it takes him to some pretty strange places.

Those familiar with director Richard Bates, Jr. will be prepared for the jaunty tone of this blackish comedy-slash-modern social commentary. From his fabulous first feature, Excision, Bates has displayed an all-consuming interest in skewering social mores through dark and frequently bloody satire. King Knight sees him playing nice with the audience, moving from aggressively attacking the generation gap, to gently ribbing the idea of self-actualization and what that means when who you are seems directly at odds with who you once were and how one reconciles the two.

Along with Gubler, who makes his fourth appearance in a Bates film after Excision, Suburban Gothic, and Trash Fire, and leads the film, his supporting cast is deep and really helps to drive home the comedic tone. Beyond Sarafyan, the members of the coven include Andy Milonakis (Waiting…), Kate Comer, Nelson Franklin (Veep), Emily Chang (The Vampire Diaries), Johnny Pemberton (Superstore), and Josh Fadem (Better Call Saul), all of whom are comedy gold and bring each of their f’ed up characters to life. Throw in cameos from genre queen Barbara Crampton as Thorn’s overbearing mother, Ray Wise, and voiceovers from Excision lead AnnaLynne McCord, and the always great Aubrey Plaza (Child’s Play), and Bates has really stacked the deck in his favor.

But this is really Gubler’s show and he runs with it. Virtually the entire second half of the film is his journey to find out who he really is and if the person he’s become is compatible with the life experience he’s been hiding. It really is a celebration of those cast off from society, whether by choice or by circumstance, and the fact that Thorn and his coven have each chosen weirdness as a defining characteristic in their lives. It’s not just the Wiccan traditions, it’s the unique personalities that alienate them from co-workers and family, but endear them to one another.

It’s about unconditional acceptance, even when that means that someone isn’t who you think they are. It’s definitely very silly – one of the film’s most persistent running gags involves poop and where it lives – but it’s also incredibly sweet.

I was not a fan of Bates’ previous film, Tone-Deaf -- it was incredibly on the nose and left very little for the audience to ponder, shouting at us when it could’ve been whispering -- but King Knight is a return to the kind of intelligent satire where Bates works best. The characters and writing might feel a bit try-hard for some viewers, it is a parade of hipster stereotypes by design, but it’s still very funny and well worth checking out.

Review originally published during Fantasia in August 2021. The film will be available in select theaters and on demand and digital February 17 via XYZ Films.

Do you feel this content is inappropriate or infringes upon your rights? Click here to report it, or see our DMCA policy.
Angela SarafyanMatthew Gray GublerRichard Bates Jr.USXYZ Films