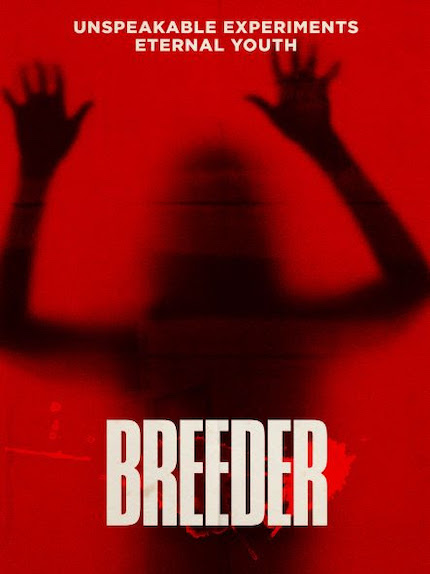 As a new entry in the Scream franchise seeks youthful audiences in movie theaters this week, a variety of indie and international films also vie for attention.

Pick of the Week: Breeder
The film is available as of today on Digital platforms via Uncork'd Entertainment.

"There's nothing natural about aging," says someone in the trailer, and don't I know it! (Personally, because I'm rebelling against the dying of the light.)

Hailing from Denmark, the horror-thriller comes from director Jens Dahl and stars Sara Hjort Ditlevsen, Signe Egholm Olsen, Anders Heinrichsen, and Morten Holst. Someone is conducting experiments, and the subjects definitely do NOT look happy about it.

Old Strangers
The film is available as of today on Digital platforms via Gravitas Ventures.

Suggestive and atmospheric, evidently, as the intriguing trailer suggests. Per the official synopsis: "Sarah, Michael, and Danny try to rekindle the spark of their youth only to be confronted with the harsh realities of their relationships. Just beyond their reunion, in the deep woods, there is something otherworldly growing and feeding on their pain."

Diary of the Grizzly Man
The three-part series is available as of today on Digital platforms via Shout! Studios.

If you enjoyed Werner Herzog's documentary Grizzly Man (2003) -- and who didn't? -- here is more, much more, about the bear-loving Timothy Treadwell. The series has been "crafted from Treadwell's vast film archive, and takes us deep inside the unfolding dramas and life and death struggles of the Alaskan animals he devoted his life to protecting and understanding."

Arriving later this week, eight more titles join the battle for your bucks.

Borrego
The film is available Friday, January 14 in select theaters, on Digital platforms, and On Demand via Saban Films/Paramount Movies.

Known for her sharp delivery of comic dialogue, Lucy Hale also has a dark side of her screen personality that looks to be explored well in this action-thriller, directed by Jesse Harris and also starring Leynar Gomez, Olivia Trujillo with Jorge A. Jimenez and Nicholas Gonzalez.

Here Hale stars as "Elly, a young botanist on a research mission gone awry. After witnessing a drug mule's plane crash in the Borrego desert, she is kidnapped and forced on a dangerous journey to a remote drop off point. With limited essentials and alone in the desert with her captor, desperation for survival takes hold as Elly risks her life to escape from his clutches before the trip turns deadly."

The Curse of La Patasola
The film is available Friday, January 14 in select theaters and On Demand via Vertical Entertainment.

Beware, men who are unfaithful to their wives! Official verbiage: "On a weekend camping trip, two struggling couples are haunted by La Patasola, a famed vampiric monster from Amazonian folklore, testing their relationships, morality, and will to survive." AJ Jones directed.

The Free Fall
The film releases Friday, January 14 in select theaters and VOD .

Shawn Ashmore, Andrea Londo and Jane Badler star in a horror film that presents yet another view on married couples: "After attempting to take her own life, a young woman must wrestle with an overbearing husband."

Wrestling with your partner? That doesn't sound so bad. Until you watch this trailer, which gets progressively more disturbing.

Italian Studies
The film releases Friday, January 14 in select theaters and On Demand via Magnolia Pictures.

Vanessa Kirby, who was so sensational in Pieces of a Woman, stars as a writer who "inexplicably loses her memory and suddenly becomes unmoored and adrift on the streets of Manhattan with no sense of time or place -- or even her own name." Adam Leon directed; David Ajala and Annika Wahlsten also star.

Again with the married couples and horror! In this one, a woman searches for answers after her police-officer husband disappears. The trailer is effectively creepy in that found-footage type of faux-doc style.

The Pink Cloud
The film releases Friday, January 14 at the Quad in New York City via Blue Fox Entertainment.

"Life changes on a dime when a toxic and mysterious pink cloud appears across the globe, forcing the world indoors immediately and indefinitely." And, as it happens, I hate pink clouds! The sci-fi film from Brazil marks the feature debut of writer/director Luli Gerbase.

Shattered
The film opens in select theaters and On Demand Friday, January 14 via Lionsgate.

The Surprise Visit
The film is available Friday, January 14 in select theaters and On Demand via Vertical Entertainment.

Good ol' Eric Roberts stars in a thriller, based on a true story, about an attempted home-invasion robbery that goes very, very wrong.

More about Opening This Week