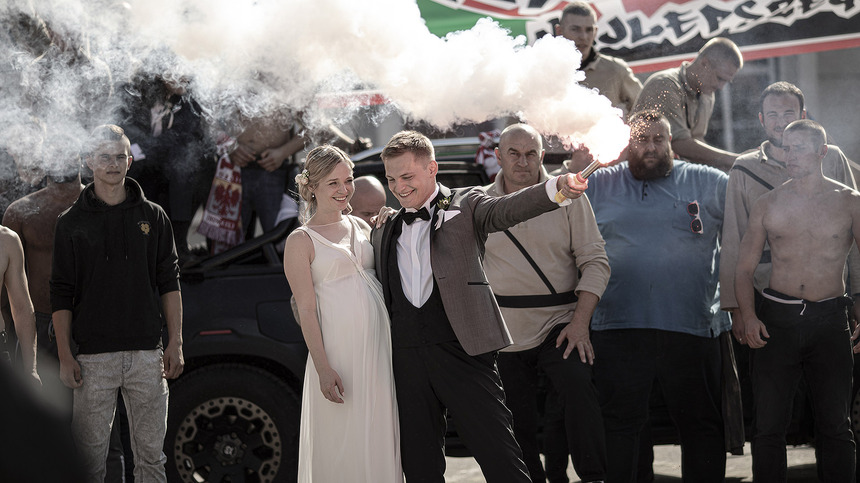 The preeminent Polish provocateur Wojciech Smarzowski managed to turn a drama about hypocrisy and abuse in the Catholic Church, Clergy, into a blockbuster movie, smashing domestic box-office records. The director has made a habit of courting controversy; his previous works have received the seal marking them as 'forbidden films.'

His previous film, Rose, has been banned in Russia due to mass rape by the Red Army, and massacres of Polish villagers by Ukrainian partisans in 1944 prevented Hatred from being seen in Ukraine. Although the right-wing ruling party of Poland expressed outrage over Clergy, it did not stop cinemas from showing it; the film was co-financed by a state-run institution. Smarzowski's appetite for breaking social taboos and tackling political subjects apparently grew, and he opens an even bigger can of worms in his latest oeuvre, innocently titled The Wedding Day.

Smarzowski is partially revisiting his feature debut The Wedding in his latest work, using the celebration of a nuptial for lashing and rambunctious social critique. While The Wedding Day preserves the black humor of its predecessor, the film takes a sudden and unexpected turn for an unflinching, raw and graphic history lesson, without losing its apparent mainstream gloss.

The film opens gently with a scene of the future bride Kasia, pregnant and with a plan to start a new life in Ireland, and her grandfather Antoni slowly getting ready for the big day. Kasia´s father and Antoni's son Rysek, a local patriarch and businessman running a slaughterhouse, enters the picture as one of the leading characters, a boisterous counterpoint to his father's largely silent and passive presence. 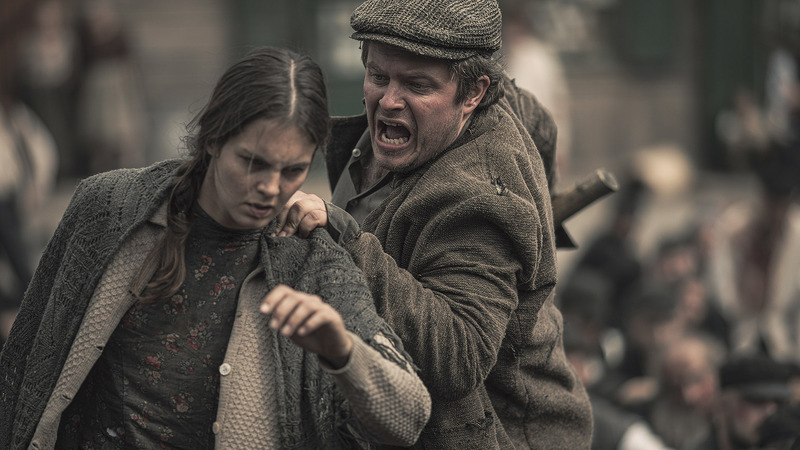 Regardless of his daughter's big day, Rysek (Robert Wieckiewicz, who trades the cassock from Clergy for a suit) is working on a new venture with German partners who, after the latest discoveries, decide to backpedal on the flawed deal. If a businessman appears a little too tempestuous at the negotiating table, it's not his passion for business or looming financial problems; he is being extorted with footage of improper conduct in the abattoir.

Rysek goes into full overdrive mode, multi-tasking every which way, running a scheme of corrupting the Germans, organizing his daughter's wedding and jubilation, dealing with a marital crisis, a seemingly senile father, his hidden past, pulling strings for employees, and managing an impromptu midnight excavation on a site of his upcoming enterprise expansion, all over the course of a single night.

Rysek is just one cog, albeit bigger, in the wheel of Smarzowski's eventful and frenetic collective portrait that is painfully accurate, with Catholic priests lambasting a "rainbow plague", Nazi-saluting football hooligans, and racist or xenophobic wedding guests. The wedding day becomes a boiling pot of aggressive nationalism, suffering from memory lapses in the national history. The director pushes pedal-to-the-metal, accelerating the speed and volume of occurrences in a pulsating rhythm throughout the bacchanal of seduction, betrayal, exploitation, heartbreak, corruption and genocide.

The disintegration of Rysek´s family and life over the course of the celebration is just one side of The Wedding Day that is a double feature compressed into a single installment. The unraveling of the celebrations has a parallel plotline, a period counternarrative restaging the country's bleak history in uncompromising detail.

The grandfather Antoni (Ryszard Ronczewski, who died in 2020) remains largely passive as he is suffering from Alzheimer's Disease, but the old traumas are surfacing in his memory and he is reliving the grim times of pre-WWII Poland in his mind. Antoni's storyline is as hectic as his son's night: he witnesses the segregation of Jews and growing anti-Semitism as he is courting his Jewish sweetheart. 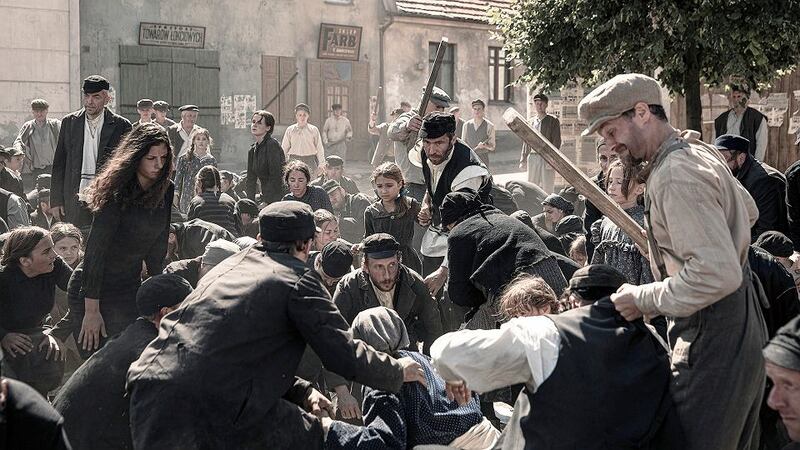 With the arrival of Nazi officers into Antoni's village, the segregation and ridiculing of Jewish inhabitants take a drastic turn starting with physical humiliation, leading to a pogrom carried out by Poles. The whirlwind of stirred hatred takes a turn for the worse when Antoni steps outside his cocoon passiveness and voyeurism in an attempt to reverse the fate of a few victims.

The Wedding Day must have appeared impossibly convoluted on paper, but the execution of the intermingling of a large coterie of characters is fairly ironed out in a manner of organized chaos. The present and the past, represented by the two patriarchs Rysek and Antoni, overlap as the past gradually invades the wedding festivities. In addition to a retrospective arc on Antoni's youth, his memories are materializing amid the celebration hubbub.

The present openly mirrors the past, as Smarzowski makes parallels that are hard to overlook or  ignore. The director demonstrates the thin shell between a farce and a horror. As much as merging wild merrymaking with Jewish pogroms sounds crass and in bad taste, The Wedding Day condenses the family saga, bookended by both events, to gut-wrenching effect.

Smarzowski is an experienced craftsman and he manages to filter an arthouse topic through mainstream genre filmmaking. Equally to Clergy, The Wedding Day is a blockbuster movie designed for a large audience, albeit being a minefield of provocations, some elegantly hidden, others scattered with an intention to intentionally disturb.

The director, who is also responsible for the screenplay, brandishes several parallels with the motif of pigs, as the central character is running a slaughterhouse; some images turn out even as extreme as if they were teleported from Charlie Brooker´s Black Mirror, namely a sudden appearance of a reverse bestiality rape. 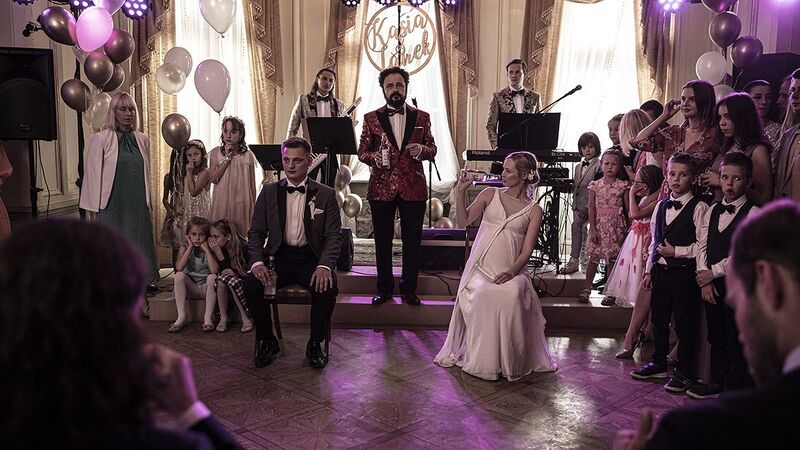 The Polish provocateur adapts a shock-your-senses tactic, especially the uncompromising ruthlessness of the past that almost reaches the territory of The Painted Bird but the extreme material is cloaked with blink-and-you-miss-it montage. The same does not necessarily apply for Antoni's plotline, where the humiliation and eventually murder of Jews in the hands of Poles cheered by Nazi officers takes a protracted form.

The Wedding Day is a paradox of mainstream filmmaking, as the film's contradictions and shocks make for cinematic edutainment. For the recurring didacticism and programmatic disruption of nationalistic self-image, The Wedding Day is an uncomfortable history revision delivered in a masterful and provocative high-wire act of genre, commercial and arthouse filmmaking of intense social relevance. Smarzowski makes a spectacle out of a confrontational revisiting of the national collective memory in an unorthodox approach to a Holocaust movie.

The Wedding Day won the Best Director and the Best Screenplay awards at the 2021 Tallinn Black Nights Film Festival.

Do you feel this content is inappropriate or infringes upon your rights? Click here to report it, or see our DMCA policy.
Agata KuleszaMichalina LabaczPolandRobert WieckiewiczTallinn 2021Wojciech SmarzowskiDrama