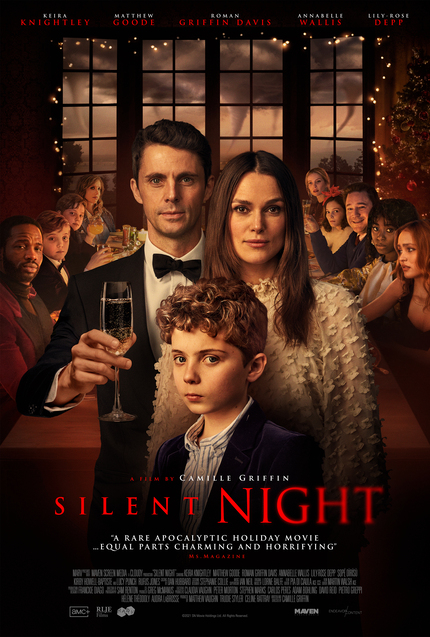 Not all is as it seems when families and old friends meet up in the picturesque English countryside to enjoy what will turn out to be a revelatory last Christmas supper together, but there's something they know that we don't about tomorrow, namely, that they don't expect it to come. This happy holiday gathering of friends hides an impending and inevitable calamity in Camille Griffin's blackest of comedies, Silent Night. With an impressive cast led by Kiera Knightley, Matthew Goode, and Jojo Rabbit breakout star, Roman Griffin Davis, this ensemble piece balances wildly disparate tones with admirable grace, delivering an occasionally dour, but never dull exploration of interpersonal relationships and the consequences of choices we make for ourselves and others.

The movie opens with Nell (Knightley), Simon (Goode), and their precocious son Art (Griffin Davis) furiously preparing for a gaggle of friends to descend upon Nell's mother's country home for a seemingly normal -- if extravagantly executed -- Christmas dinner. The first to arrive are the glam Sandra (Annabelle Wallis), her milquetoast husband Tony (Rufus Jones), and their insufferable princess of a daughter, Kitty (Davida McKenzie). Initial greetings reveal that Sandra, sporting a ludicrous red sequenced evening dress, has just spent her child's college savings on a pair of shoes, tipping us off that something isn't quite normal about this particular holiday season, but not giving away the full story just yet.

As the afternoon progresses, the rest of the party arrives, ready to settle in with their oldest and dearest as they await some inevitability to which we are not yet privy. Couples James (Sope Dirisu) & relatively new American girlfriend Sophie (Lily-Rose Depp) and Bella (Lucy Punch) & Alex (Kirby Howell-Baptiste) round out the company, along with Nell's twin sons Thomas (Gilby Griffin Davis) and Hardy (hardy Griffin Davis), who kind of lurk in the background of the increasingly chaotic goings-on.

Pleasantries exchanged, the group moves on to dinner, where the reality starts to become clearer for the audience, as revelations about a looming global crisis fire up the children, who resort to lobbing barbs at each other and their parents when it becomes clear that this night will not be like any other. An ominous disaster is on the way, and there's no way out, so they've all come together to communally cope the best they can.

The exact nature of this event is best left to be discovered by the viewer, but let it be said that its magnitude and finality leads these best-of-friends to let down their guards and open up about festering wounds and hidden desires in a way that they may never have a chance to do again. This leads to hurt feelings and bawdy revelations, as one might expect, frequently sending the adults off in pairs to reassess their positions on a lot of things, not least of which how they will weather this crisis. But let's not forget the children, they have even more to lose than their parents in this situation, and while most of them are resigned to it, Art is beginning to have his doubts.

Being a smallish film, set in a single location with a tremendously talented group of performers, Silent Night delivers far beyond its means in terms of entertainment in the face of catastrophe. Writer/director Davis gives almost everyone -- ironically, save her twin sons playing Thomas and Hardy -- an opportunity to shine with rich character development and revelation and sharp dialogue throughout. It's no easy feat to fully flesh out a lead cast of this size in the space of a ninety-minute film, but through deft screenwriting and dialogue, we get a very good feel for who these characters are, at least in this stressful situation.

Knightley and Goode are the nominal stars of the film, but it truly is an ensemble piece, with each performer fully embodying their response to anxiety in this unique situation. Nell & Simon holding it together for the sake of their children, Sandra & Tony attempting to leave nothing on the table on their way out, James & Sophie and an impending addition weighing complicated choices for their immediate future, and Bella & Lucy alternately attempting to mask their fear with outrageous humor and copious amounts of alcohol.

However, there's one performance that eclipses all of the others here, and that's young Roman Griffin Davis as Art, who delivers a gut-wrenching turn as the questioning conscience of the group. The first thing that grabs the audience is Art's delightfully foul mouth, Roman can drop F-bombs with the best of them, it's understood that this is a trait of his before this night, but it also frees this young man to speak his mind in a way that children are not expected to do. When his vulgarities begin to evolve into genuine concerns, it becomes obvious that it's not a cutesy character bit, it's instead indicative of a greater and deeper understanding of life, filial love, and empathy than someone his age would usually express.

Art is frequently placed in conversational pas de deux with his adult co-stars and more than holds his own, forcing them to not only reconsider how they are treating their own friends and children, but also to be more introspective as he seems to have thought about all of this at least as much as they have. When Art challenges the accepted solutions to the problems of the night, he does it with such weight that it registers in ways that many of them hadn't considered, and that is completely due to Roman Griffin Davis's stellar performance, which reminded me of the kind of firm grasp of craft that first dazzled audiences about Haley Joel Osment back in 1999's The Sixth Sense.

Silent Night isn't the first film to straddle the line between comedy and tragedy, but it is among this year's best at approaching both tones with savvy and respect. The tragedy is never given short shrift, and the comedy is always topical and relevant to the moment in which it exists. While it's certainly easy to pin the film's ostensive references to current day political and pandemic-related concerns, the core of the film is the interpersonal relationships that can be relevant forever. Wonderfully potent writing from Camille Griffin and a knockout performance from Roman Griffin Davis make Silent Night a colossally successful film about a cataclysmically comical Christmas.