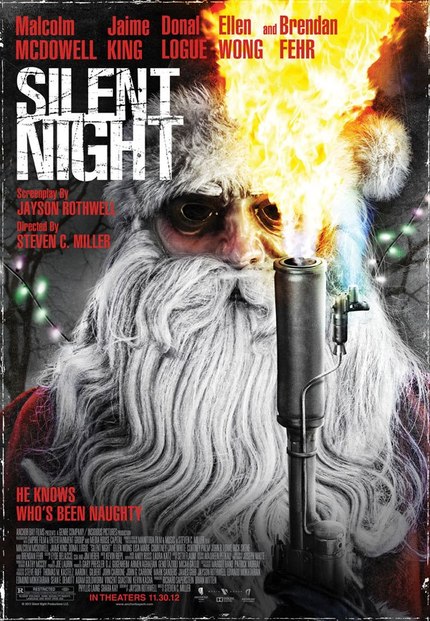 Who needs a list? It's Santa who's being naughty in Steven C Miller's Silent Night. A remake of 1984's Silent Night, Deadly Night by the director of Automaton Transfusion and The Aggression Scale, Anchor Bay will be releasing the Christmas slasher in a limited theatrical run November 30th before it hits BluRay and DVD the following week.

In this loose remake of 1984's horror classic Silent Night, Deadly Night, it's a snowy Christmas Eve in Cryer, Wisconsin and the normally quiet town is bustling with activity as the citizens get ready for the big day and the towns annual Santa Parade has brought a record number of Santas to town. Deputy Sheriff Aubrey Lorimer is stuck reluctantly working the night shift, dealing with drunken Santas, road closures, and stressed out locals but things are about to take a deadly turn...

A vicious serial killer, dressed as Santa Claus, has made his own "naughty list" and anyone on it is in big trouble. As the bloody body count rises Aubrey races to discover the killer's identity, but in a town full of Santas, shady characters and dark secrets finding the real murderer will take more then a Christmas miracle.

A sadist Santa has come to punish the naughty of Cryer, and this Christmas Eve will be anything but a Silent Night...

Malcolm McDowell and Jaime King star. Check the trailer below.