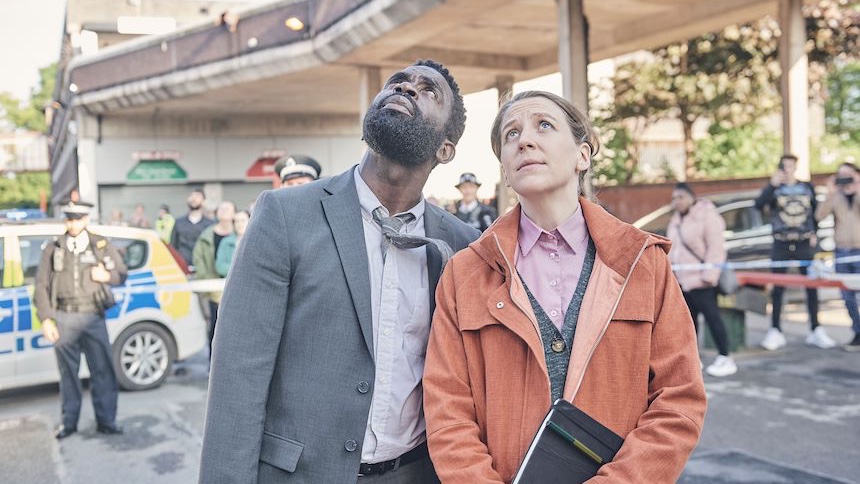 The Tower
The series is now streaming on BritBox. I've seen all three episodes.

One is a veteran police officer Hadley Matthews (Nick Holder), the other a 15-year-old girl. From the top of the tower come shaken rookie police officer Lizzie Adams (Tahirah Sharif), the veteran's partner, and a terrified five-year-old boy, the girl's brother. What happened?

Launching like a runaway train from the get-go, the series steadily builds tension throughout its first episode, as one might imagine would happen, especially in a neighborhood already marked by racial strife between the police and a largely immigrant population. Lizzie's supervisor, DI Kieran Shaw (Emmett J. Scanlan) is none too helpful to DSI Sarah Collins and DC Steve Bradshaw, who are only trying to do their job to investigate the unexplained deaths of two people.

Soon, Sarah's experienced instincts suspect something afoul may be afoot, a suspicion deepened by Lizzie's action; the young officer goes into hiding. We also see DI Shaw doing things that an honorable supervisor ought not be doing, so our suspicions as a viewer are raised as well.

Developed and written by veteran writer and producer Patrick Harbinson (Homeland and many more), based on Post Mortem, a novel written by Kate London, a former detective in the Metropolitan Police 'murder squad,' and directed by Jim Loach, the series starts at a furious pace, then heats up and simmers down over the course of its three episodes. Yet it never remains less than gripping.

Much of this can be credited to the tightly-plotted story; no dialogue is ever wasted, and every scene matters. The performances make each character feel authentic and completely wrapped up in the case at hand, especially Gemma Whalen, who makes for a strong lead as an investigator with a clear and present sense of moral purpose.

Summary: Definitely recommended. It is an adult-targeted series, so be prepared for an abundance of blood and foul language.