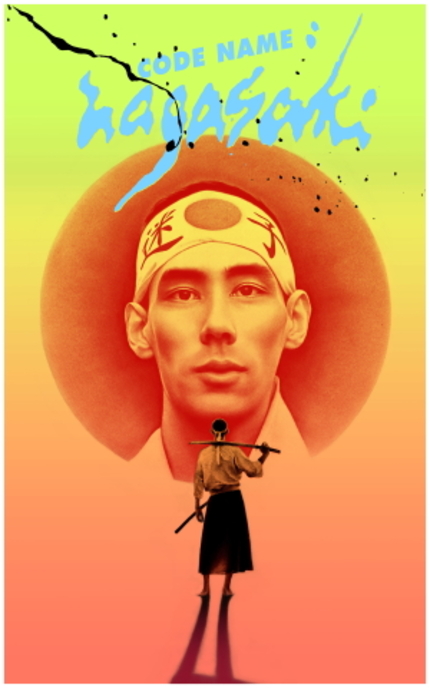 Probably most of us have imagined our lives in a particular genre: sometimes we see ourselves living in a romantic comedy, other times we imagine ourselves as a noir detective, or a cowboy, or we think about how we might handle a situation in our lives if we could live is via a particular mode of storytelling. And if there's a particularly large situation or predicament, it's often something of a comfort to view it through a certain lens, to process perhaps unexpected information.

Norwegian filmmaker Fredrik S. Hana has been making waves in genre film for several years with shorts and videos, so it came as surprise that his first feature would be a documentary. But the end result has a lot of Hana's signature touches, and a sensitivity to serious and often painful material. With his friend and co-writer Marius Lunde, they create compelling tale not only for its story but for its style and mode.

Marius was raised in Norway by his father, but he's always known that he is half Japanese. However, when he was very young, his mother left for a holiday in Japan and never came back, cutting off all contact with Marius. While Marius seems well-adjusted and not lacking from his father, needless to say, there is a void that only a connection with his mother and his Japanese heritage will fill. Using his own skills and interests in cinema, he and Hana set out to depict Marius' journey to find her mother. Only, being filmmakers, they present Marius' story as more than just a series of documentary talking heads.

Marius imagines himself as a Samurai, on a beach, framed against the sun and waves, deciding who he is and where his loyalty should lie. Then, he's a noir detective, investigating his mother's disappearance amid a haze of cigarette smoke. Then, he's in a Kabuki theatre show, as some kind of Japanese mythological monster, waiting in the shadows of trees to frighten his own self out of his determination to seek the truth of the past.

One segment sees an actress hired to play Marius's mother, so he can practice what he would say if he met. Even this event causes Marius some anxiety and fear, and it's brave of him to allow such intimate emotions to be captured. At times his performance is just that, a performance he uses to process how he feels about this journey. But others, it's clear that he is laying bare how he feels. And no wonder, given the circumstances.

Hana handles his direction with great sensitivity, acting more as a mediator: this is Marius's very personal journey, and at the same time, they both love and want to make a great film. The documentary is filled with energy and enthusiasm, and no doubt Hana puts his skills into every part of it, from a style we are used to seeing from him, when Marius is the detective or the samurai, but also knows when to step back and let the camera just roll. When the climax comes, the use of animation - there to protect privacy - actually connects us closer to the surreality and raw emotion of the moment, through its interpretation of the players.

Do you feel this content is inappropriate or infringes upon your rights? Click here to report it, or see our DMCA policy.
Code Name: NagasakiFredrik S. HanaMarius LundeToronto Reel Asian Film Festival