Review: THE PEBBLE AND THE BOY, Mods Make the Man 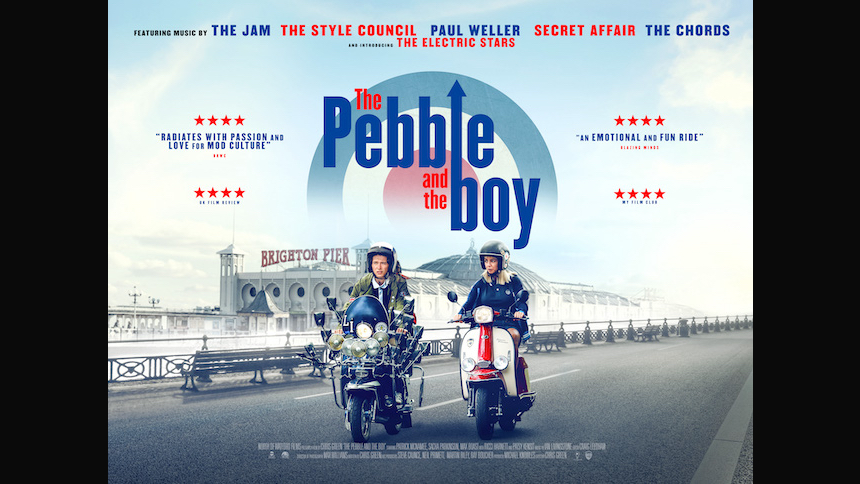 Once a Mod, always a Mod.

The Pebble and the Boy
The film is now available on Digital and On Demand.

At a funeral in Manchester, England, John Parker's father is laid to rest.

John, who was away at college when his father died unexpectedly, takes note that his father is lionized as a Mod by his friends, who solemnly ride their scooters to his grave in salute. John, however, is not a Mod, so when his father's scooter is delivered to his custody, he soon seizes on the idea of riding the scooter to Brighton -- 'the spiritual home of the Mods,' as he reminds his mother -- and scattering his father's ashes there.

Over his mother's objections, John sets off on his journey to Brighton, along the way gaining a companion in the unruly daughter of one of his father's old friends, who is primarily interested in finally having an opportunity to see Paul Weller (of The Jam fame) perform live in concert. The sentimental journey is interrupted by mechanical issues and other troubles, forcing John to make an overnight stop, where he learns a potentially troubling secret and gains yet a third companion.

The mismatched trio have more misadventures on the road, which prolongs their day trip greatly before finally arriving at their destination and bringing on more misadventures. As Ralph Waldo Emerson wrote, "it's not the destination, it's the journey," and so the journey continues for John even after the trio arrive at the beach.

Along the way, the 19-year-old John must confront his father's true identity. Certain questions have been raised which make him question whether he ever truly knew who his father was, even though they had, apparently, a good and loving relationship. Still, we all want to know our loved ones better, don't we?

In theory, this will draw us closer together, though not necessarily; as Joy Division sang, "love will tear us apart." And what about this repeated motif, 'once a Mod, always a Mod'? Young John Parker does not believe himself to be a Mod, nor does he know much about Mods, much less the riots between Mods and Rockers in the 1960s.

That seems to be the haunting refrain about The Pebble and the Boy, which I don't know much about either. As it happens, Franc Roddam's Quadrophenia (1979), which I had never seen before, is now streaming on The Criterion Channel, so I popped that on, since it's set in the Mod culture of London in the early 1960s and ends up in Brighton during and immediately after the riots. It's a bouncy, bristling and rude manifestation of teenage rebellion, and serves as a brilliant counterpoint to The Pebble and the Boy.

Written and directed by Chris Green, The Pebble and the Boy may not be brilliant, but it is a lovely, energetic film that explores what children do and do not know about their parents. The main draw for me is the music of Paul Weller; I remember buying every single that The Jam released in the 1970s, and followed Weller in The Style Council that followed, so his influence on the characters here, especially John's father, is notable and cheering.

Very watchable for anyone who is interested in modern-day youth culture in the UK, The Pebble and the Boy is nicely crafted and features pungent performances by Patrick McNamee as John Parker and Sacha Parkinson as Nicki, the rude girl with more than a bit of earned wisdom to dispense. Patsy Kensit, who is always welcome to see, also appears for several scenes.

The Pebble and the Boy