Tom Hanks stars as the one person you would want to survive the Apocalypse. Miguel Sapochnik directs the sci-fi road trip, soon to stream on Apple TV+. 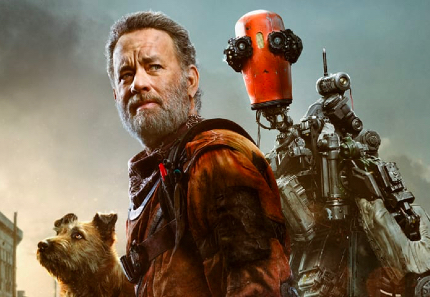 It's the end of the world as we know it.

Finch
The film will begin streaming exclusively on Apple TV+ on Friday, November 5.

Tom Hanks could read a telephone directory for two hours and earn an Academy Award nomination for doing so.

The actor has built up a deep well of goodwill over the past four decades, thanks to his uncanny ability to bring individual life to a rich variety of heroic protagonists. In many respects, he is The Last Movie Star, tying him directly to a row of bigger-than-life screen heroes, first canonized in the 1930s, who prove themselves to be unflappable as they modulate their talents to deliver witty dialogue, perform physical comedy, romance men and women, and deliver sophisticated and dramatic baggage with the greatest of ease.

Occasionally, Hanks endeavors to modulate himself to fit roles that are outside his greatest strengths as an approachable, capable, likable, and neighborly person. Those roles, like ill-fitting shoes, stand out and are unpleasant to recall.

Like a pair of aging, yet comfortable loafers that still fit him perfectly, Tom Hanks slides into his role in Finch with the greatest of ease. Somewhere around St. Louis, Missouri, in the U.S. -- the middle of the country -- he has built a life for himself, his dog, and a small robot. They are the only survivors of an apocalypse that has wiped away life as we know it, replacing it with dust, a lot of dust, and then even more dust.

The indefatigable Finch may be the only human around. By this point, sometime after the beginning of the end of the world, he has gathered sufficient supplies to keep himself and his dog fed and watered. They also have a safe place to sleep, where Finch has put together his own laboratory and gathered sufficient tools, machinery, and other equipment that empowers him to build things that he needs for survival.

His latest project is a life-size robot (voiced by Caleb Landry Jones), enhanced with the capacity to learn. As he brings the robot to life, Finch learns that a gigantic storm is approaching, which compels him to leave his comfortable life and move to San Francisco.

The whys and wherefores are explained gradually in the original screenplay, credited to Craig Luck and Ivor Powell. It's a script that respects the audience's innate ability to figure things out. We don't need to be told that it's a future caused by an unspecified apocalyptic event; we can see that.

We're in the company of Tom Hanks, though, and that is (almost) always a good thing and ensures, at a minimum, that the trip will be pleasant, delightful, informative, probably both comic and dramatic, and probably poignant. (It's about the end of the world, and Tom Hanks ain't exactly a spring chicken anymore.)

Under the direction of Miguel Sapochnik, who has demonstrated his craft and precision in a raft of television shows, including Game of Thrones, Fringe, and Banshee, the film befits its subject in an entirely engaging manner. It is a road-trip movie, and I always favor those, thanks to the many enjoyable road trips I have taken in my lifetime.

It's also a road-trip movie with Tom Hanks as your pilot. He doesn't always fly right, but he has a fantastic sense of direction, and so does Finch.

Do you feel this content is inappropriate or infringes upon your rights? Click here to report it, or see our DMCA policy.
Apple TV PlusApple TV+Miguel SapochnikTom HanksUS