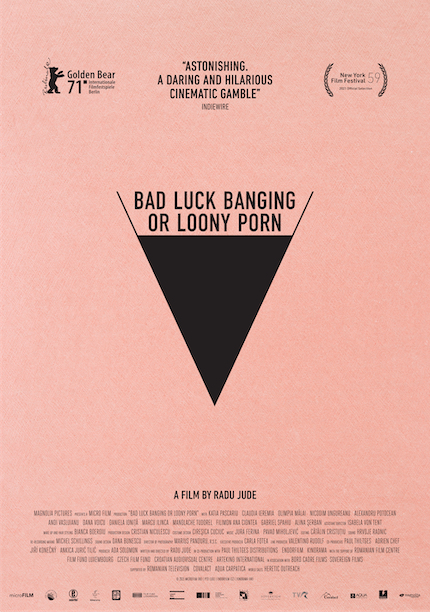 The Romanian filmmaker returned to the German film festival after last year's double-stint. Uppercase Print has been a political theatre by Gianina Cărbunariu adapted to film form,  dramatizing an actual 1981 Securitate case file concerning a high school student.The Exit of the Trains belongs to Jude's on-going docu-essay cycle mapping the Holocaust in Romania.

(Filmmaker Jude has explained that the central conflict is based on a series of similar "incidents" when teachers across the country and beyond have been fired from their day jobs because of leaked sex videos. In the director´s eyes, this opens a larger discussion on where society stands.]

The lengthy walking tour through Bucharest captures the COVID-19 zeitgeist. In the two films from last year, Jude performed excavation of lesser flattering parts of the national history. In the walking episode of his latest film, he conserves the historical context while building up the pretext for the explosive third act.

And the pretext is a collective diagnosis of the mental state and consciousness of society in the 21st century. Jude and his DoP Marius Panduru (Uppercase Print, I Do Not Care If We Go Down in History as Barbarians, Aferim!) switch into observation mode with overlong shots of the city's architecture and spaces that offer a glimpse of a collective portrait that will blow up in the final confrontation.

In the following act, Cătălin Cristuțiu (the editor of the one-shot film Poppy Field, Uppercase Print, and Ivana the Terrible, among others) presses the pedal of editing to the metal, creating a fast-paced montage of scenes and clips. Jude created a vocabulary foreshadowing keywords that will be exposed and over-used in the final verbal showdown between the teacher and angry parents.

While the first act offers an instant snapshot of the state of society as the director observes the protagonist's incidental encounters in a socially distanced manner, the second act delivers a crash course penetrating the political and cultural depth of the national psyche. Radu Jude is well versed in presenting arguments that are not very flattering to the collective portrait, despite a couple of naughty scenes to prompt a chuckle or two, and background gags that serve as a momentary relief in an escalated situation.

The first act appears as a social sketch (that is also the film's subtitle, "a sketch for a popular film"), while the second act unpacks a barrage of scenes establishing the national mindscape that will be confronted in the last part.

Unfolding as a 'one versus all' scenario, Emi bravely faces the cohort of outraged parents among whom is even a Catholic priest in the third act. Many of the gathered parents, representing different walks of society from the Church to military officers, have already cast their judgment. The electrified drama and comedy explode in full as any legitimate reason is shot down by the prejudiced group, who even sink so low as to resort to conspiracy theories.

The zeitgeist encapsulation that the film wears on its sleeve comes full circle in the last act as Jude empowers his protagonist, whose sexuality is being used against her in a farcical trial of public opinion, to execute control over her by a hypocritical majority. The crowd weaponizes the teacher's sexuality to stigmatize and compromise her. Although Jude saves the best for last, in a triumphant "wonder woman" finale, in which Emi hits back against the verbal abuse.

It is uncanny how the encounter between parents (society) and the teacher plays out as a dramatization of a social media lynch with shaming, castigating, and trolling. In addition to providing a narrative structure, the final encounter offers yet another zeitgeist snapshot of social (media) outrage and the erosion of democracy.

The film will open in select U.S. theaters in New York and Los Angeles on Friday, November 19, 2021, with a national rollout in December, via Magnolia Pictures. Visit the official U.S. site for more information.

Do you feel this content is inappropriate or infringes upon your rights? Click here to report it, or see our DMCA policy.
Claudia IeremiaKatia PascariuOlimpia MalaiRadu JudeRomania