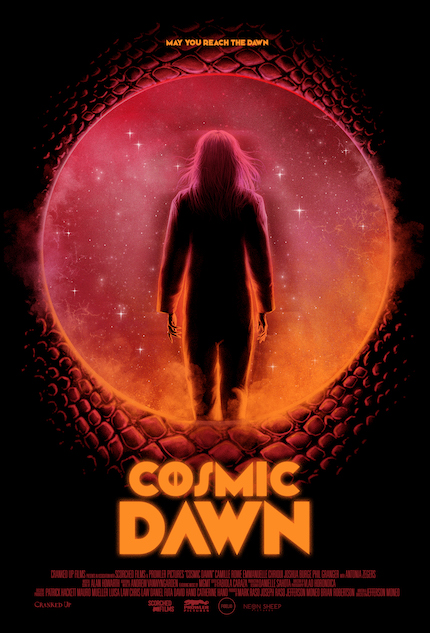 We've got a cult, UFOs, and mysteries galore. In other words, the striking first trailer for Cosmic Dawn does exactly what a trailer should do: ignite a compelling desire to see the film.

Written and directed by Jefferson Moneo, Camille Rowe stars as Aurora, a young woman who joins a cult in search of greater understanding about her mother. Aurora was an eyewitness to her mother's disappearance apparent abduction by aliens who are not of this world.

Obviously, she's been haunted by this event ever since. So when she's slyly introduced to a group of friendly and welcoming people by a book store owner (Emmanuelle Chriqui), she joins them. Soon, though, further mysteries await her every move, and the threat level increases exponentially, as the trailer amply demonstrates.

Antonia Zegers also stars as the cult's leader, Elyse. The film, which is said to 'float on the border between thriller and horror,' will head to theaters as well as On Demand platforms on February 11, 2022. Have a look at the trailer below.

Do you feel this content is inappropriate or infringes upon your rights? Click here to report it, or see our DMCA policy.
Antonia ZegersCamille RoweCanadaEmmanuelle ChriquiJefferson MoneoAnimationActionAdventureFantasy