Tsui Hark's magnificent reinvention of Wong Fei-hung, starting with Donnie Yen, gets a deluxe treatment as The Criterion Collection scores a knockout with its box set. 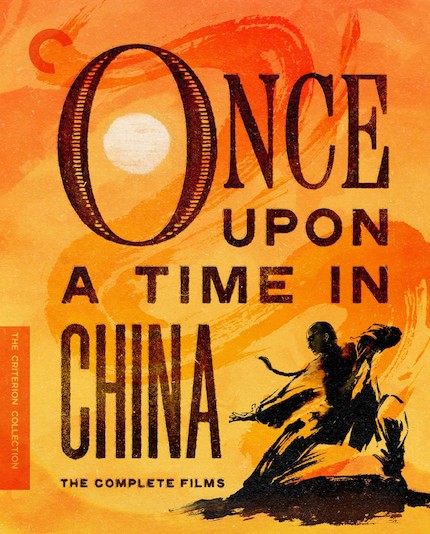 Once Upon a Time in China: The Complete Films
All six films in the series are now available on Blu-ray in a box set from The Criterion Collection.

Once upon a time, our team of editors and writers published a series of articles in which we watched a film by a celebrated director that we had never seen before and posted our reactions. When we came to Tsui Hark, eight (?!) of our writers confessed that they had never seen Once Upon a Time in China (1991) before. (Their quite varied reactions can be enjoyed here.)

In my case, I first began to investigate Hong Kong films in the late 1990s, and when I asked for recommendations, Once Upon a Time in China kept coming up as a good foundational choice, so I added it to my Netflix DVD queue (?!) and enjoyed the film immensely, later purchasing it when it was released on U.S. DVD and enjoying it even more, since it was a better transfer.

Lo and behold! I haven't seen it since, and never did get completely caught up on the series, and so I am delighted to report that The Criterion Collection's new box set, complete with all six films in the series, along with assorted new interviews with Tsui Hark, Nansun Chi, editor/planner Marco Mak, and film critic Tony Rayns, as well as archival interviews and special features from various home video labels, is rather magnificent.

The first three films, and the last, make authorized use of the Fortune Star transfers, and range from good to very good to pretty great, while the fourth and films are via Warner Bros., restored by Criterion, and looks just as good.

To my mind, the first film is great, the second is even better, the third dips just a bit, and the fourth is better than I remembered. I'd never seen the fifth (directed by Tsui Hark) before, and watching it now, I was surprised that it was demonstrably better, thanks to Tsui sitting in the director's chair.

I'd never seen the sixth film before, and thoroughly enjoyed the 'martials arts Western' aspects, and director and martial arts choreographer Sammo Hung's different take on the character, his heroes and his creative style. It's great to be able to compare and contrast three directors and consider what each brought to the series.

Here's my breakdown of the special features; note that each film is on its own Blu-ray.

II: The Legend of Wong Fei-Hung - informative 2002 doc on the man himself (48); Donnie Yen talks about his role and his choreography in his typical style (16); Yuen Wo-Ping master class - great excerpts from the New York Asian Film Festival in-person appearance (42); From Spikes to Spindles -- documentary on working conditions in New York's Chinatown on which Tsui Hark shot some of it, uncredited (45); trailer,

III: Tsui Hark interview from the 1990s, in which he talks about the genesis of the series and why he made it, also has a great story in which he talks about seeing a Roman Polanski film at a Hong Kong theater, taking notes, and then seeing (after the lights came up) that two other Hong Kong directors were also in attendance, taking notes (23); John Wakefield talks about his role as a Russian military man and expresses the reality of receiving his script pages just 30 minutes before shooting began each day (11); deleted scenes - very interesting, ranging from tiny snippets to entire scenes (21); trailer.

IV: Marco Mak interview -- very interesting, as he talks about his role as editor and then as planner (12); trailer.

V: Yen Shi-kwan interview -- very good, as she talks about Cinema City and Film Workshop, and her work with both and what she and Tsui Hark accomplished (10); trailer.

VI: Making Of - standard type of featurette from location shooting in Texas, includes interviews with cast and crew (25); Behind the Scenes (4), trailer.

A printed booklet rounds out the package, featuring a great essay by film critic Maggie Lee on the films themselves and a great essay by novelist / former occasional contributor to these pages Grady Hendrix about Wong Fei-hung, the man and the films.

Once Upon a Time in China II

More about Once Upon A Time in China