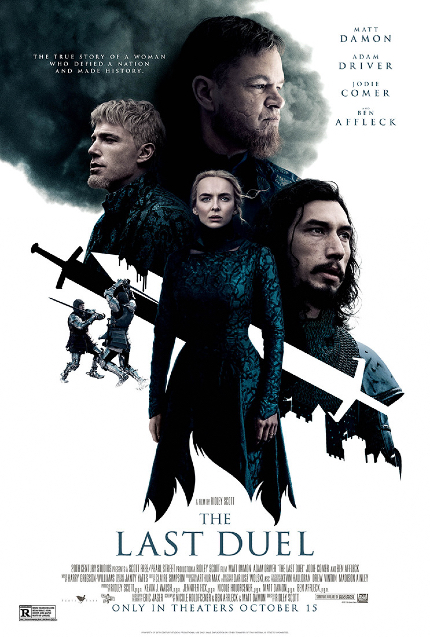 Celebrating his 84th birthday in November, Ridley Scott (Kingdom of Heaven, Gladiator, Blade Runner, Alien) remains one of the 21st-century’s most vital, prolific filmmakers, delivering scale, scope, and world-building to mainstream audiences on a level equaled by few filmmakers half his age.

He also remains one of the few English-language filmmakers who can credibly make a claim to the title of the greatest living filmmaker (Scorsese and Spielberg justifiably take the top spots, but Scott isn’t far behind). Not counting the year of our Lord 2021, Scott has directed no less than eight feature-length films, two episodes of a science-fiction series, Raised By Wolves, and several shorts over the last 11 years, a total that will increase with the release of the pandemic-postponed The Last Duel and the awards-ready House of Gucci before the calendar resets to January.

The Last Duel opens closer to the end than the beginning of a medieval story, the last “judicial duel” (trial by combat) in recorded French history as Jean de Carrouges (Matt Damon), an impoverished knight of fierce temper and outdated notions of chivalry, honor, and integrity, faces off against Jacques LeGris (Adam Driver), his onetime friend-turned-rival and the subject of an attention-grabbing criminal lawsuit naming LeGris as the rapist of de Carrouges’s noble-born wife, Marguerite (Jodie Comer).

While Marguerite looks on, her life literally hanging in the balance (if her husband fails and perishes at LeGris’s hands, she dies too), a cross-section of 14th-century French society, from the lowborn to the French aristocracy, including LeGris’s benefactor and de Carrouges’s antagonist, and King Charles VI (Alex Lawther, channeling his inner Game of Thrones's Joffrey), the young, inexperienced French monarch.

The Last Duel takes an unconventional, risky, potentially alienating approach in telling the respective stories and perspectives of de Carrouges, LeGris, and Marguerite, dividing the narrative into three, unequal parts, first focusing on de Carrouges, a battle-hardened military hero in his own mind, then shifting to LeGris, a man for whom the concept of consent doesn’t exist in any real, tangible way, and finally Marguerite. Each one, in turn, gets the story most favorable to their individual perspective.

For de Carrouges, it’s a history of fighting for king and country, of entitlements (wealth, land, status) deserved, but cruelly stolen from him through subterfuge and brute force. For LeGris, a low-born peasant who rises to most-favored-squire status to Count Pierre d'Alençon (Ben Affleck), a hedonistic lord and proto-dude-bro in dyed-blonde hair and a goatee to match, effectively icing the socially awkward de Carrouges out. For Marguerite, well-educated, well-read, but minus all but limited agency, it’s fighting not for revenge or retribution but justice for the rape committed by LeGris in de Carrouges' absence.

The three-part structure, each one titled “The Truth According …” with the word “Truth” lingering onscreen in Marguerite’s retelling, often covers the same or similar ground, though usually with just enough subtle differences to remove the redundancy label. Still, some scenes, while not overlapping with other retellings, feel nonessential, probably because they are (i.e., nice to have, but not must-haves).

Oddly, Scott savors lingering on the recurring land disputes between de Carrouges, Count Pierre, and LeGris that ultimately turned them into mortal enemies. Those land disputes, however long-winded and non-cinematic, suggest a direct connection to how women, regardless of family name, were considered property for legal purposes and thus could only speak and consequently, be heard through their husbands.

When a character points out that Marguerite’s rape isn’t a crime against her, but her husband as a property crime, it’s meant to underline Marguerite’s powerlessness in a court of law. Only with her husband’s overt support and willingness to turn her case into public spectacle can Marguerite possibly obtain justice and only then if de Carrouges wins the judicial duel against LeGris.

In 14th-century France, might not only makes right, might makes divine right. Whoever won the judicial duel could only succeed with the Christian God’s invisible intervention, thus making the winner favored by God's judgment (iudicium dei). In turn, the loser would lose not only his life, but his name, reputation, and property, his body defiled and exhibited for public consumption.

Not surprisingly, Scott, a veteran of big-budget epics and the detailed, layered world-building they require to pass an audience’s believability test, succeeds once again. With the exception of Count Pierre’s colorful fineries, however, the 14th-century France depicted in The Last Duel falls on the grim, gritty, gray scale.

A deliberately muted color scheme seemingly complements the murky morals and ethics of the world Scott brings to the screen, though on more than one occasion, The Last Duel teeters on the edge of visual ugliness (intentional, of course), leaving the central performers to keep audiences engaged through their line readings and physical interactions. Thanks to a committed cast delivering their next-level-best (Comer and Affleck stand out the most), it works more often than not, sometimes resoundingly so.

The Last Duel opens today, only in theaters.