Benedict Cumberbatch, Claire Foy, and Andrea Riseborough star in a historical biography, directed by Will Sharpe. 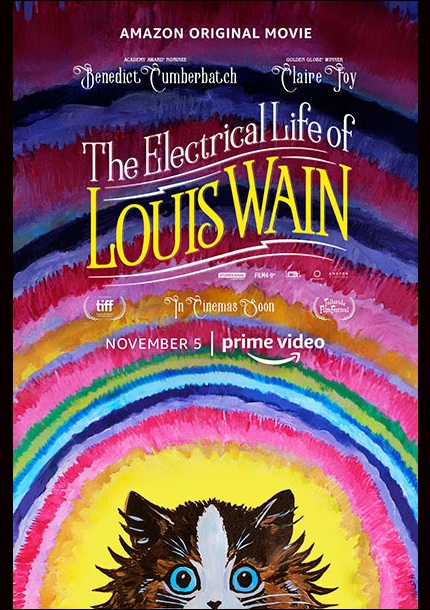 Take your sweet time, why don't you?

The Electrical Life of Louis Wan
The film opens in U.S. theaters on Friday, October 22 via Amazon Studios. It will be available to stream on Amazon Prime Video on November 5.

Some people are born at the wrong time. Louis Wain was one such person.

Born in 1860, Louis came of age in Victorian England, which was ruled by society's customs and expectations, especially for the wealthy, as depicted in the film. When his father died, Louis (Benedict Cumberbatch) was tasked with the responsibility of caring for his mother and providing for his entire family, which included his five younger sisters, including Andrea Riseborough and Stacy Martin.

This was a task for which he was in no way suited. Lacking financial acumen, and given to strange nightmares, he floundered in his role as family head. Instead, he was fascinated by the newly-introduced electrical systems that lit up the country and constantly rambled on about his ideas for the use of electricity to transform society.

To make a living, he tapped into his innate artistic abilities and drew illustrations, ambidextrously and at a rapid pace, which soon drew the attention of kindly newspaper publisher Sir William Ingram (Toby Jones), who employs Louis as a staff illustrator. Soon enough, two individuals catch his eye and change his life: the family's beguiling new governess, Emily (Claire Foy), and a cat named Peter.

Emily is older than Louis and so, combined with her 'lower' station of life, their love affair, which blooms into marriage, scandalizes 'proper' London society. After they've been together for a short while, that darn cat enters the picture.

Louis enjoyed drawing animals, especially dogs, but cats were another matter. Louis became fascinated with Peter the cat, and in his rapid-fire process, drew many many drawings of cats, which were picked up for publication, widely distributed, and became immensely popular.

The balance of the picture dramatizes the fate of Louis and Emily's loving marriage, Louis' increasing focus on cats, cats, cats, and how the family's fortune was altered by his near-obsessive behavior. We also get considerable insight into how Louis' younger sisters interacted with him -- or not -- and a picture on society in general at the turn of the century.

Directed by Will Sharpe, The Electrical Life of Louis Wain is a friendly, gentle, and warm historical biography that assumes prior knowledge of Louis Wan, or at least his cat paintings. You must have seen them before!

Well, no, unfortunately, this Irish-Mexican Yank had never before seen any of Louis Wain's cat paintings, nor knew anything about the man and his story. (Sorry, I'm a dog person, not a cat person.) So it would have been helpful to see more clearly the pictures themselves at the point in the narrative where it becomes important, instead of at the conclusion, in the end credits.

I can see, though, how the widespread popularity (at the time) of the cat paintings could have altered society's view of animals, and if it helped in any way in reducing or shaming or eventually banning animal abuse, that's certainly a good thing.

Beyond those points, the film supplies a canvas for Benedict Cumberbatch to demonstrate his thespian talents. While it's difficult to believe that he is in his 20s during the early portion of the narrative, no matter his sprightly movements and ready smile, he ages in a becoming fashion as the film moves forward in time.

Claire Foy is always a pleasure to watch, as she captures various degrees of subtlety in her character's moods. Likewise Andrea Riseborough and Toby Jones, who come with baggage fitting for their roles.

It's all a valiant effort, and there's nothing particularly wrong about the film, even if it never feels vital or vibrant. It's a poignant story about a talented man who was born at the wrong time in history for his many talents to be nurtured and fully appreciated.

The Electrical Life of Louis Wain