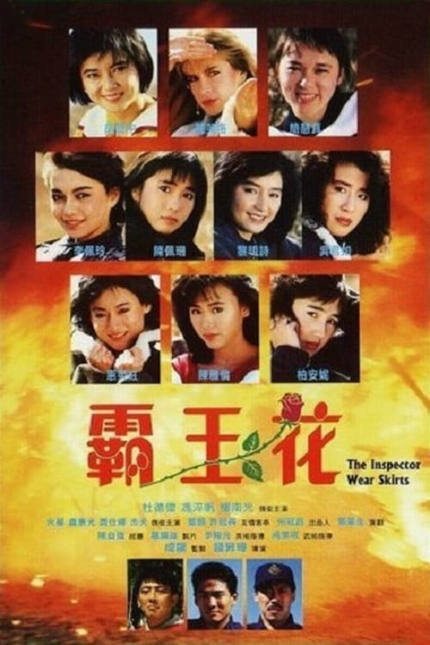 Hearkening back to the glory days of modern Hong Kong action cinema (mid-1980s to mid-1990s), The Inspector Wears Skirts, directed by Wellson Chin and starring Sibelle Hu, Kara Wai, Ellen Chan, Sandra Ng and Cynthia Rothrock, popped up in my latest visit to the Midnight Pulp streaming service and instantly drew me, thanks to its opening action sequence.

After that, the film plays more like a comedy with action, rather than a comic action film, following the decision to form an all-female squad to complement all-male tactical squadrons. This is not exactly what Madam Wu (Sibelle Hu) had in mind when she proposed it to her uncle, who is also the department's top cop.

Much of the running time consists of training exercises, conducted at the same time as a squad of men are receiving their training at the police academy. None of the men take the women seriously as police officers and/or individuals capable of doing the elite work and carrying out the responsibilities required, but, nonetheless, they would like to date them.

The training exercises often become highly competitive, but not so much as to discourage anyone from visiting the local roller-skating rink for more hijinks every night. The intensity kicks up a big notch when Interpol agent Cynthia Rothrock arrives to lend a hand, and the women take their training even more seriously.

The individual characters are assigned one trait each, which keeps things simple, and allows director Wellson Chin to keep things bopping along at an invigorating pace, leading up to an extended third-act action sequence, in which a murderous squad of criminals endeavor to rob a jewelry fashion show. The fashion show gives an excuse for the women to dress up and do their best to sashay down the runway.

Meanwhile, when the robbery breaks out, all the male police officers are killed and/or tied up -- or, killed and then tied up -- leaving the remaining women to save the day with their weaponized antics. It's all in good fun, even with the pile of dead bodies that accumulate.

The film is an enjoyable ride, especially for those of us who love Hong Kong action movies. It was on my radar as a "Girls With Guns' film after I was introduced to Hong Kong cinema in the late 1990s, though I never got around to watching it until now.

As a streaming service, Midnight Pulp appears to specialize in off-beat indie and international genre titles. This coming weekend, for example, it will celebrate the 40th anniversary of well-regarded TV movie Dark Night of the Scarecrow on "Sunday, October 24th, at 9pm EST, with an encore broadcast at 9pm PST (12am EST), airing exactly 40 years to the day and time it ran on the CBS Saturday Night Movie on October 24, 1981 at 9pm EST," all per an official statement.

Over the past couple weeks, I've enjoyed another HK flick, In the Line of Duty 3, which is even better than The Inspector Wears Skirts, along with several other offerings that lend themselves to the free (with ads) service, by which I mean movies that are episodic in nature. Both Hong Kong films feature the remastered versions prepared and distributed by Fortune Star, and in both cases, the transfers look ace.

As with other free (with ads) streaming services, the ad-breaks on Midnight Pulp appear to be automated, meaning that every nine minutes or so, the movie will take a break -- no matter if it's mid-scene or not -- for a prescribed dose of commercials, usually lasting two minutes. It's better than broadcast networks or basic cable channels, which typically feature ad-breaks that stretch to four, five, or even six minutes, in my experience.

But, yeah, it's still a break in the narrative flow, which is not ideal. It's a good choice, though, if your budget is tight, or if you're not certain you want to commit to yet another streaming service. I think we can all relate to that; I know I can.

Or, consider the free (with ads) service as a way to gauge your own personal interest in the titles offered on the service, which are updated every month. Most of what's now available is not brand spanking new, which reminds of my old neighborhood video stores, where I would inevitably start browsing the racks looking for something I hadn't seen before, especially if all the new releases were checked out.

If the ad-breaks become too much of a pain, and you enjoy the range of films that Midnight Pulp offers, a paid subscription (with no ads) is available for $4.99 per month, or $49.99 annually.

This time of year, horror movies are hogging the showcase, which means you can (re)visit Audition and see if it makes you faint in the comfort of your own home. Or, if you have stronger intestinal fortitude than me, check out Herman Yau's The Untold Story (1993), starring Anthony Wong.

Or, vintage anime shows, or a host of documentaries, or whatever tickles your fancy.
More genre movies and TV shows are unlocked for viewing if you register with your email address. It's all according to your own personal taste and interests in cinema, which is why I like streaming services so much. And you can always cancel if you decide it's not for you.

Do you feel this content is inappropriate or infringes upon your rights? Click here to report it, or see our DMCA policy.
Cynthia RothrockHong KongKara WaiMidnight PulpSandra NgSibelle WuWellson Chin