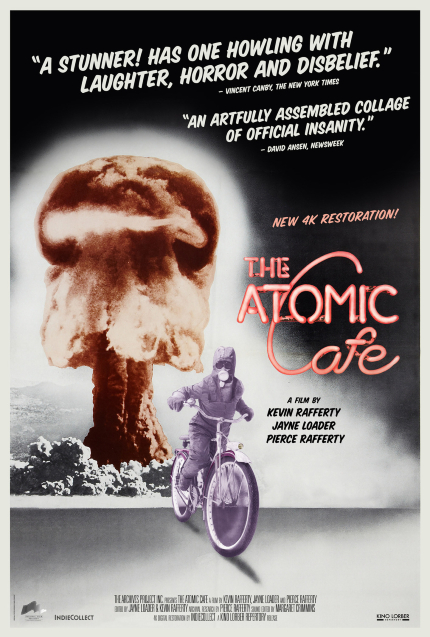 When I was young, I was blissfully unaware of the differences between narrative and documentary films. If it looked good, I watched it.

In that spirit, I attended Filmex in Los Angeles in the early 1980s. The film festival, the first I ever attended, was an eye-opener for a burgeoning cinephile (or, at least, someone like me who loved movies).

As I recall, that's where I first saw Kevin Rafferty's The Atomic Cafe, co-directed by Jayne Loader, in 1982 (during the early years of Reagan's America). The film presents an amazing collage of footage from many different sources, including educational films and television programs, dating back to a more innocent time, when unfettered atomic power actually looked like a good idea.

My memory of that packed screening, sharing in the gasps and laughs induced by the eye-raising material with a crowd of appreciative and respectful people, remains one of my fondest memories from that period of my life. So I'm sorry to hear that Kevin Rafferty passed away early in July [2020] at the age of 73, but glad to hear that The Atomic Cafe is now streaming on KinoNow.com.

Originally published in July 2020, when the film debuted on the KinoNow platform, where it remains available for purchase. The film is now available on the KinoCult streaming service, which recently launched. Herewith, a few additional comments.

Watching the film again, with commercial breaks interrupting the action every nine minutes or so -- the price of watching any film on a "free" streaming service is dealing with regular commercial interruptions -- I was surprised at how sobering the documentary plays nowadays.

To be honest, I don't think I watched the film before writing about it last year, so my article really should have been marked as a news item rather than any kind of review. That's entirely my editorial mistake.

What I remembered from the long-ago original screening I attended was the laughter and enjoyment of all the funny training films that the U.S. produced in the early 1950s. It seemed so silly to think about being able to survive a nuclear bomb blast by 'ducking and covering' under a desk, which is what I was taught during my first years of schooling.

It's not so funny now. Very few things in The Atomic Cafe now strike me as humorous, even in an ironic way, with a raised eyebrow and a brief shake of the head. The documentary remains the kind of thing that could raise temperatures rather than eyebrows.

Though watching a movie with metronomic ad breaks can be an irritation at best -- unless you happen to need the products advertised, he wrote with a glance at his own site's ads -- it's necessary to pay for the service. It also prompted me to think more deeply at what I was watching and contemplate the years that have passed since the film's release nearly forty years ago, as well as the ways in which modern culture has not truly advanced very far beyond the early 50s.

We still see fear and mistrust, we are still confused and frightened by misinformation, we still hope that all the world's problems will just go away. And bombs that can blow up the world are still out there, waiting to be used.

The documentary, originally put together in 16mm, was restored in 2018 and looks amazing. All the archival footage, of course, retains its primitive glory, but I don't think that makes a lick of difference. The Atomic Cafe remains a terrific film.

BTW, KinoCult looks like a nifty service. The press release announcing its launch declared: "The focus will be on the wild and the weird of genre cinema. ... Kino Cult plans to super-serve this audience with a deep catalog of hundreds of relevant titles, many of which are streamable for the very first time, all in HD and all completely free for genre fans. The channel will offer the best in cult cinema across action, horror, comedy, and sci-fi, both new and rare vintage hits of genre cinema, and ensuring that adventurous movie fans will have access to films that have not been easy to find in the streaming age."

I haven't been able to dig too deep into the catalog yet, but I love that film descriptions pop up when clicking over the title/cover art, and I like the selection that is available. It could be an especially good option for those of us with refined tastes but limited budgets.

Do you feel this content is inappropriate or infringes upon your rights? Click here to report it, or see our DMCA policy.
Jayne LoaderKevin RaffertyPierce RaffertyUS

More about The Atomic Cafe