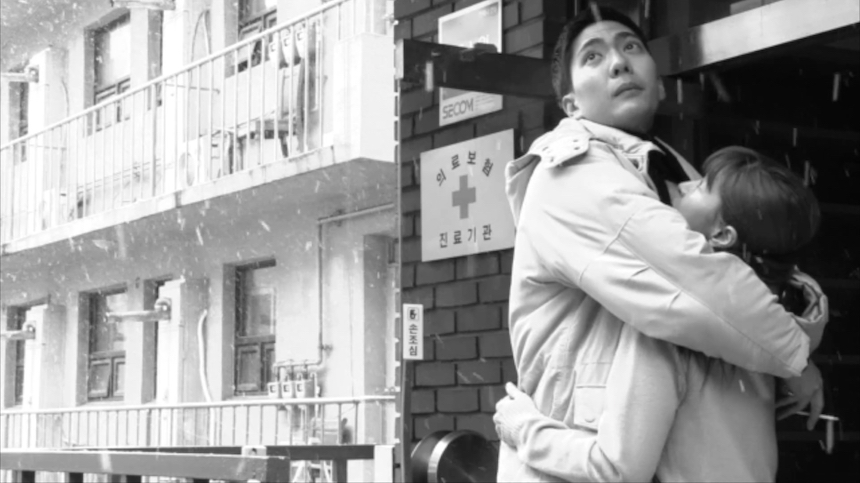 Introduction, Hong Sang-soo's second film at the festival, is a timeline jumbled, melancholic piece about young love in the eyes of adults. Shot just before COVID pandemic and the ensuing lockdown in February-March of 2020, this slight film, clocking at mere 65 minutes, is an unusually serene drama for the director. Perhaps it was the result of our collective helplessness and fear for the future that Hong felt when he conceived the project, in regards to the younger generation.

It starts with a doctor practicing Chinese medicine at his office, praying to god that he would devote himself if god gives him a second chance. To do what? We never find out. Distraught, he forgets that he left patients with acupuncture needles still on them in the examining tables and even his son, Young-ho (Shin Seok-ho) who's been waiting to see him in the waiting room, and falls asleep at his desk.

We move to Berlin, where mom (Seo Young-hwa) is dropping off her daughter Ju-won (Park Mi-so) in the care of a painter friend (Kim Min-hee). Ju-won is there to study fashion design. She sneaks off to see Young-ho, who surprised her by flying over to see her. They talk about Young-ho coming to study in Germany too, that they want very much to be together. His parents should help him financially to study abroad, he wishes.

Next we see Young-ho summoned by his mom (Cho Yun-hee, also in In Front of Your Face), to consult his career with a famous stage actor (Ki Joo-bong) in Kangwon province. (Hong's favorite destination for his characters to 'run away' to) Young-ho brings his buddy with him to the meeting, just to be his buffer. The meeting gets heated after a copious amount of soju is consumed: the reason Young-ho gave up acting was he felt guilty kissing other women in student films on account of his girlfriend. The old actor blows up on him. How naive. 'Hugging' a woman, in Korean alludes to 'making love'. He shouts to the young men in his drunken stupor. "So hugging in acting is also an act of love. Everything an actor does is an act of love! How can your girlfriend not understand that?!"

Young-ho excuses himself and runs out to the winter beach and finds Ju-won playing in the sand. She tells him that she left her German husband and came back to Korea. She is also going blind. He comforts her, saying everything will work out.

Then we do a double take on the beach, Young-ho is braving the water in his underwear, and his buddy warns him of catching a cold. In the distance, his mom is watching him from her hotel balcony.

Characters overlap in three chapters. Hong's cinematic playfulness is there. Loose structure and double takes are there too. But with black and white cinematography and blustery and cold winter landscape give way to the film's overall melancholic mood.

Introduction is a bittersweet love story of a young couple deeply lost, as they are swayed back and forth by the older generation. Even though they went through the same thing in their youth, the elders don't spare the youth in their criticism: they are too weak, too naive, and too idealistic. Kim Min-hee's painter, who is pragmatic and understanding, plays a bridge between two generations here.

The worldwide pandemic exposed many unnerving truth about our society, but how it affects the younger generation is seldom discussed and the future effect of this period remains to be seen. Perhaps Hong is asking us to be more introspective in the time of crisis and cut our young ones some slack.

Do you feel this content is inappropriate or infringes upon your rights? Click here to report it, or see our DMCA policy.
Sang-soo HongSeok-ho ShinMi-so ParkYoung-ho KimDrama