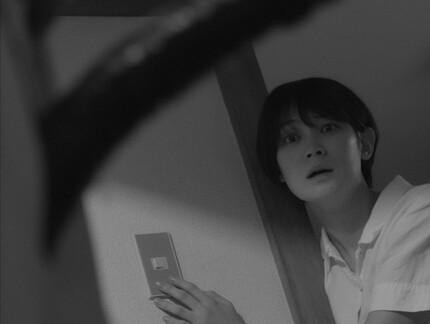 A friend of mine once wrote an essay for a university film course, discussing how it's often difficult for a viewer to fully comprehend a film from another culture; there are often too many nuances and contexts simply not understood. This isn't to say that we can't enjoy and appreciate these films. But especially when it comes to humour, or how we view things that might be considered out of the ordinary, what is lost in translation?

The first story is of a lonely woman; she shouldn't be lonely, of course, since she has a boyfriend and friends who come over regularly. But as we all know, loneliness can come in a crowd: her boyfriend barely acknowledges her, while her friends don't notice how sad she is. One of these aliens has inexpicably appeared in her closet; at first she is terrified, but then it seems the alien can give her pleasure (a loving homage to Possession), and she finds herself drawn to something she hasn't experienced before, even if it comes from this unlikely source. Ugana frames her subtle shift as she grows in confidence and happiness, and shows how the bubble of this secret pleasure is burst; can she share her pleasure, or will that lead to greater loneliness?

The second story takes us to a small dive bar, and a young woman looking lonely and bored, presumably slowly drinking and smoking because she has nothing else to do. In walks her old boyfriend, with an alien in his bag. An alien who seems to love strawberry parfaits, and whom the man treats as a child. In fact, he thinks this is what he and the woman need to bring their relationship back to life: something to look after, together. They take turns feeing the alien parfait, laugh, and find their bond forming again.

At this point Ugana has revealed his strange yet deceptively thoughtful meditation on loneliness, in the form this rather low-key alien invasion. As people become used to the aliens, so the aliens become neglected. But they still bring people together, as two lonelty workers in a factory bond over the care of a near-dead alien. One claims he can understand the alien, and they scramble to hide it from the authorities. Not only do they find each other in friendship, they find a new zest for life, a connection deeply needed in their humdrum lives.

In stark black and white, the cinematography by Omino Masashi is beautiful and melancholic, emphasiing the lack of human warmth that comes from a modern world of separation by circumstance and technology, and maybe outside intervention is necessary, even if it times it gets a little perverse. Clocking in at just about an hour long, Extraneous Matter is a quick, funny, sad, and a little bit of a tittilating look at our need for love.