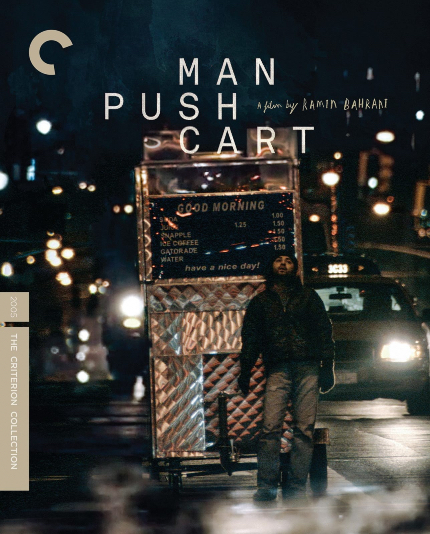 For an unknown Iranian filmmaker trying to make a movie in New York City, it’s like pushing a big heavy cart through traffic at night.  For director and screenwriter Ramin Bahrani, the analogy became a reality with his first feature, 2005’s Man Push Cart (Un café en cualquier esquina).

In Man Push Cart, we meet Ahmed (Ahmad Razvi), a young immigrant from Pakistan all alone in the Big Apple.  Each night at 3am, he drags his large metal coffee and donut vending cart from its secure holding into position on a street corner for another busy morning of $1.85 and $2.50 transactions.  It’s the exact kind of mind-numbing Sisyphus-ian business that the bustling world around him takes for granted.  Indeed, Ahmed is introduced as just another of the nine million stories in the naked city.

Over time, however, we come to learn details of a much richer life, the one he’s given up for a shot at the American Dream.  A fellow Iranian (Charles Daniel Sandoval), clearly successful and professionally dressed, recognizes him as a 1990s rock star from back home.  “What are you doing here?”, blurts the gobsmacked fan.  Soon enough, the guy has taken the destitute Ahmed under his wing, first throwing him some carpentry work, and then trying to mount a musical comeback.  But Ahmed’s personal baggage proves to be a lot weightier than even that damned silver cart.

As Ahmed’s toils unfold and unfold again, we become increasingly privy to glimpses of his previous life.  Small details, such as the fact that he opts not to remove a child’s withering triceratops sticker from his cart when he’s cleaning it, eventually pay off.  There was, of course, more to his life than being a vaguely remembered rock star.  In the contemporary timeline, he’s staring down a possible relationship with Noemi (Leticia Dolera), an attractive young lady with whom he finds chemistry, but also plenty of frustration.

If Man Push Cart stumbles anywhere, it’s in its ultimate handling of Noemi, the only female character of note, as more of a metaphor than a human being.  Then again, so much of Man Push Cart is metaphorical in nature (right down to its title) that singling this one out is perhaps unnecessary.  In any case, these actors are giving their fully committed all, particularly Razvi, who elsewhere on the disc shares a frightening production story of when the cart momentarily got away from him while pulling it uphill in late-night traffic.

Directed with understated precision by Bahrani, Man Push Cart proves to be an ideal (if very hard won) roll-out of a career that’s made good on its debut’s promises.  The newly created extras that Criterion provides shed particularly apt light upon the truly challenging making of this film.  They are as follows:

⁃            A new conversation between Bahrani, Razvi, and Second Unit Director Nicholas Elliott on the making of the film.  The first of two recent in-person chats held at Criterion’s New York offices (amid COVID-19 social distancing) is a very engaging collective recollection of the down 'n' gritty realities of getting this Iranian-centric film made in an often-hostile post 9/11 environment.  Enough time has passed that a certain professional objectivity has set in, though the vivid details recalled retain poignancy.

⁃            Another new conversation, this one between Bahrani and scholar Hamid Dabashi on the origins of the film and Bahrani’s cinematic influences.  Also recorded recently at Criterion, this altogether different chat with the filmmaker takes us into the “why” of making Man Push Cart.  The well-spoken and astute Bahrani articulates his own domestic filmmaking origins and education as well as how his drive to engage with his familial homeland has informed so much of his perspective and his work.

⁃            Backgammon, a 1998 short film by Bahrani.  Around eleven minutes in length, the humble and housebound Backgammon tells the story of a precocious little girl who wants in on her older relatives’ game of choice.  Their repeated scolding her and reminding her that backgammon, for whatever reason, is not for kids, only eggs her on more.  Finally, she gets a little boy to play with her.

Critic Bilge Ebiri provides the written essay for the insert, complementing the excellent high-definition digital master of the feature itself, supervised and approved by director Ramin Bahrani.  The Blu-ray boasts an uncompressed stereo soundtrack, which is rich in the immersive ambient din of unending street life.  There’s also the film’s trailer and English subtitles for the deaf and hard of hearing.

Man Push Cart, though the story of a solitary man caught in a slog that becomes something of a spiral, is never a slog itself.  Rapturous in its empathy for the contextualized immigrant condition, Ramin Bahrani pulls us to a better place.  Raise a cup of piping hot street coffee to the filmmaker and to Criterion for showcasing this important career-launching effort.

Do you feel this content is inappropriate or infringes upon your rights? Click here to report it, or see our DMCA policy.
Blu-rayCriterionRamin BahraniUSAhmad RazviLeticia DoleraCharles Daniel SandovalDrama