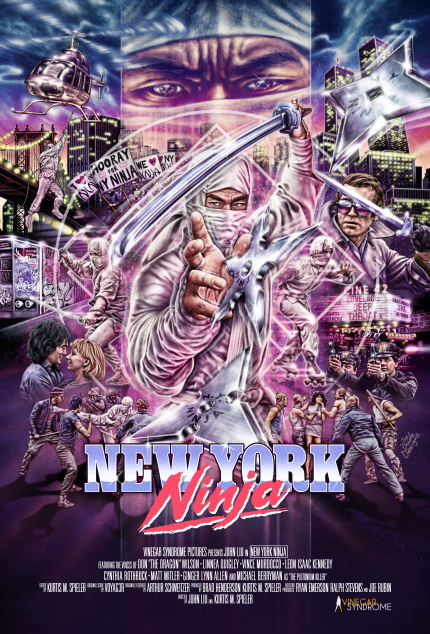 It was probably the moment in New York Ninja in which the titular vigilante digs a bullet out of his chest with a custom engraved "N Y Ninja" throwing star that truly made me think, "Yeah, this is the good stuff", and if you aren't sold by that, I'm sorry friend, I don't wanna know you.

With a backstory almost as amazing and perplexing as the story onscreen, John Liu/Kurtis Spieler's New York Ninja is an absurd, outré, completely unbelievable cult classic in the making. A vigilante ninja romp through classic grimy '80s New York written, directed by, and starring Liu, one of Hong Kong's king kickers, New York Ninja was an attempt to break through to the American audience in 1985, only to be abandoned completely when shooting finished. No one even knew it existed until the preservationists at Vinegar Syndrome stumbled across the uncut/unedited reels in one of their massive acquisitions a couple of years ago.

With nothing more to go on other than film cans labeled "NY Ninja", writer/re-director Kurtis Spieler took on the massive task of turning this bananas footage into something that kind of makes sense. But without sound, a script, production notes, call sheets, or any other documentation of what the film was actually about, he had to start from scratch. Taking the reels upon reels of footage and forming it into some kind of narrative shape, re-writing a script to follow the insane action, casting '80s action/exploitation legends to record all of the dialogue, and commissioning a period perfect brand-new score from Voyag3r to punctuate the action, Spieler and the team have created a monstrous masterpiece of action camp that must be seen to be believed.

The basic story revolves around John (John Liu), a TV sound man whose pregnant wife is murdered after witnessing an abduction. Liu vows to avenge her in the only way he knows how, through bloodshed and retribution. Armed with swords, the above-mentioned custom throwing stars, and roller skates (?), Liu becomes the N Y Ninja, kicking and slashing his way through the multicultural thuggery of pre-Giuliani New York on his way to destroy those who took away what was most precious to him.

Carving his way through a world populated by henchmen who look like a combination of Village People rejects, half-assed droogs, and The Warriors mash-ups, Liu takes every opportunity to show us his stuff, throwing ridiculous high kicks around like they're going out of style. If it sounds pretty standard for '80s action fare, just wait until you see where this wild ride goes, because I guarantee you're in for a treat.

Left to his own imagination and with little other than silent action footage and a few potentially enlightening opportunities for lip-reading, Spieler's script is a buck-wild homage to the craziness of '80s exploitation. New York Ninja is anything but subtle, and Liu & company's over-the-top performances provide plenty of chances for Spieler and his amazing voice cast to go bigger than they ever thought possible. With incredible dialogue and insane plot devices and characters that - in any reasonable universe - should never all appear together in the same film, New York Ninja is a crowd-pleaser from the word "Go!".

Led by a voice cast assembled from Vinegar Syndrome alumni, New York Ninja is a family affair. Liu's title character is voiced by Don "The Dragon" Wilson (Bloodfist), while his supporting cast includes the talents of Cynthia Rothrock (Yes, Madam), Leon Isaac Kennedy (Penitentiary), Ginger Lynn Allen (Vice Academy), Michael Berryman (The Hills Have Eyes), Linnea Quigley (The Return of the Living Dead), Vince Murdocco (LA Wars), and Matt Mitler (The Mutilator). The love for '80s action runs deep in New York Ninja, and even with the crazy resumes of these cult heroes, none of them have ever made something quite like this.

Moving with lightning speed from one bonkers set piece to the next, New York Ninja is a marvel of maximalism on a shoestring budget. From Liu's less-than-convincing but more-than-effective fight choreography, to the crazy hoodlum costuming, to a spontaneous army of child ninjas, to a briefcase right out of Kiss Me Deadly, to an amazing rattail chewing/fencing bodyguard, there's something for literally everyone. Spieler had plenty to work with, and the fact that he managed to weave so much into this story is very impressive, making this a one-of-a-kind restoration/rejuvenation project for the ages.

As downright goofy as New York Ninja is, it’s the genuine heart of the original production that really makes the whole thing work. Liu may not have been a high-minded artiste, but he knew what he wanted, and what he wanted was to bring the high-octane, high-camp action of late '70s Hong Kong to the streets of New York, and while this version of his film might not necessarily be his, he can still be proud that he is a part of something unique. There is passion filling every frame of this jaw-dropping 4K restoration that pulls the viewer into the story, no matter how unbelievable the on-screen action.

New York Ninja is the kind of gem that demands viewing with a crowd. This is the reason we go to the cinema in the first place, to be a part of something special, to commune with our film-loving families and share not just a movie, but an experience. New York Ninja is one hell of an experience, an ecstatic fever-dream of a film that you will want to shout about from the rooftops. This thing is rad.

Do you feel this content is inappropriate or infringes upon your rights? Click here to report it, or see our DMCA policy.
John LiuKurtis SpielerMichael BerrymanWayne GraysonLeon Isaac KennedyAction