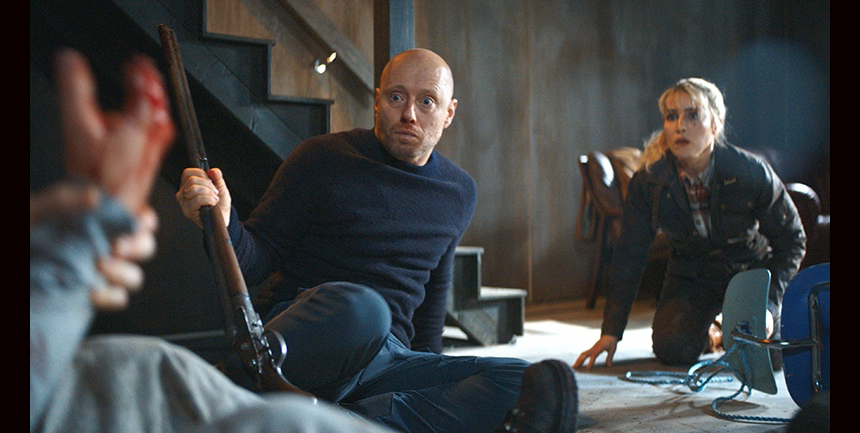 These days, it's especially hard to have a healthy relationship, isn't it?

The Trip (orig, I Onde Dager)
The film makes its international premiere at Fantastic Fest.

A married couple head away for a long weekend at a cabin in the woods. Bloody trouble is sure to follow.

We can say that with certainty because Tommy Wirkola directed. Wirkola established himself firmly on the international genre landscape with his sophomore feature, Dead Snow (2009), which followed the clever and funny Kill Bruljo: The Movie (2007). His bold and brash mixture of familiar tropes, inappropriate jokes, and wildly overflowing bloodshed was toned down a touch for his Hollywood studio debut, Hansel & Gretel: Witch Hunters (2013), which still rocketed from start to finish.

Since then, Wirkola made a Dead Snow sequel, plus What Happened to Monday (2017), a trippy action-fantasy that starred Noomi Rapace. Now he reteams with the Swedish actress for his return to the wintry Norwegian landscapes that he made run red in his zombie pictures.

We first hear that Lisa (Noomi Rapace) may be trouble from her husband Lars (Aksel Hennie), a director who talks apprehensively on the set of a soap opera with fellow crew members about the upcoming trip to the woods, where they will spend a long weekend at the cabin he inherited from his cantankerous father. Even before the trip begins, Wirkola has made it clear that this may be a broad comedy, as he introduces somewhat predictable marital and general relationship jokes.

On the drive out to the cabin, it becomes quite apparent that Lisa and Lars have a fractured relationship. Lisa is an actress who moved from Sweden at Lars' urging but has not found much success in Norway, beyond a television advert, while Lars' single film credit as director met with no success, leaving him stranded in the world of television.

They have problems and they argue, yet there is a glimmer of hope that they might possibly repair the relationship, owing to their shared, rueful sense of humor, and even the idea that they are willing to spend time together, alone in the woods on a long weekend.

Those hopes are soon dashed, however, and here ends the narrative recap. What follows is frequently funny, often hilarious, always clever and smart, and dependent entirely on the superb performances by Rapace and Hennie, who make sure that their characters ring true in their actions and in their delivery of the stinging dialogue.

Over it all, of course, is Tommy Wirkola, who conducts with his usual sure hand and an absurd sense of humor, with no hesitation about stepping over the line into what most people might term 'bad taste' or 'politically incorrect' or 'you really shouldn't do or show that.' He is quite a fearless director, and I wouldn't want to meet him alone in the woods.

Especially in the Norwegian woods, which seem to have an endless supply of blood and sharp things that can hurt people.

Do you feel this content is inappropriate or infringes upon your rights? Click here to report it, or see our DMCA policy.
Aksel HennieFantastic Fest 2021Noomi RapaceNorwayTommy WirkolaNick BallJohn NivenAndré EriksenActionThriller