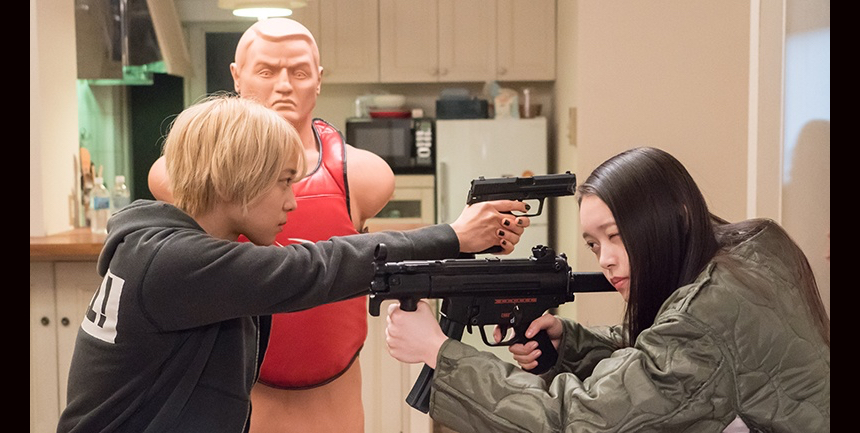 A good job is hard to find.

Even with an abundance of action, Baby Assassins is more notable for its breezy tone and the likable chemistry of its leading players.

Given the film's subject matter (and English-language title), it's no wonder that teenagers Chisato (Akari Takaishi) and Mahiro (Saori Izawa) are soon revealed to be young hired killers. Writer and director Hugo Sakamoto smoothly establishes their blase attitude toward murder and violence as they carry out their latest assignment in a snappy opening sequence, set at a convenience store in Japan.

After that, though, the primary plot points are developed nearly entirely through their interactions with each other and with the hapless, low-paid employees they encounter at the series of low-level jobs they are compelled to take in an effort to please the criminal organization. It seems that their criminal employer thinks that cloaking the teenagers' clandestine activity with the cover of menial employment will keep them undetected; this also seems to be a pattern that they have developed over the years with other minions.

The organization has never hired contract killers like Chisato and Mahiro before, one senses. They are a perfectly mismatched pair of teens -- one is cheerful and optimistic, the other is dour and negative -- but they appear to work well together, and perhaps that's the secret to their success and/or proof that the mysterious Organization has the right idea in training young people with no family to become assassins.

Whatever their backstories might be, Chisato and Mahiro are expert at laying around and only doing jobs until they are forced to do so, whereupon they display cool and ruthless attitudes. Things go according to plan until they cross paths with a branch of the yakuza that is led by an even more ruthless boss and his two children. The son is like the father, a fire-breathing, impatient sort who is quick to resort to his fists and his gun, while the daughter is more like a stereotypical teenage girl, albeit one who wants to be trained to kill people and is eager to get started.

Sakamoto keeps the action perking along and, though the action sequences are not shot with much distinction, perhaps owing to a low budget, those scenes are only designed to add spice to a delightful criminal character story. Chisato and Mahiro make for an offbeat couple who complement each other perfectly.

One almost hopes these baby assassins never grow up.

Do you feel this content is inappropriate or infringes upon your rights? Click here to report it, or see our DMCA policy.
Akari TakaishiFantastic FestHugo SakamotoJapanSaori Izawa