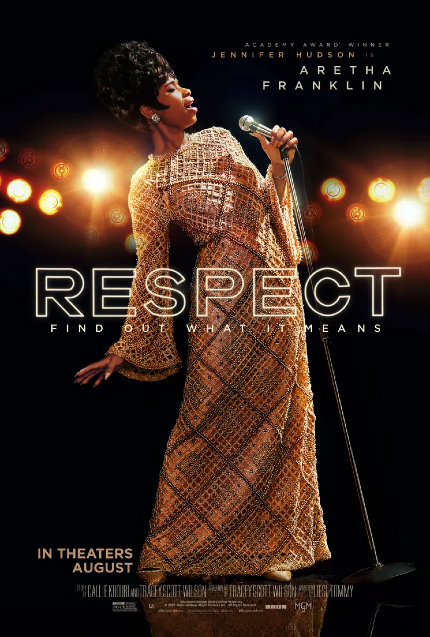 Respect
The film opens in theaters on Friday, August 13, 2021, via United Artists Releasing.

Aretha Franklin was a great singer. Her life story offers a multitude of strikingly different, inherently fascinating and potentially compelling threads that could be followed by any filmmaker wishing to craft a bold and fresh narrative, accented by her powerful voice, a sound that could send chills of wonder down any listener's spine.

Instead, Respect follows the faded pattern of a conventional bio-pic storyline. Lacking any sense of her true accomplishment or deserved place in history, the episodes resemble a child's lazy recitation of familiar facts learned by rote from an outdated history textbook.

Jennifer Hudson is sterling, however, as Aretha Franklin, and she is surrounded by other notable faces, including Forest Whitaker as her father, who all do their level best to bring life to their characters. The film begins with Re, as her family members repeatedly call her, summoned from sleep at the age of 10 to perform for her father's invited guests at their home. Re is happy to do so, even though she is treated like a trained animal, because she loves to sing. And she sings beautifully.

Hints are given that her adolescence was troubled -- her unhappy mother tearfully saying goodbye, an adult family friend offering to be her 'boyfriend' in a sickening manner -- before moving onto her career as a young singer under the close and careful tutelage of her father, a Baptist preacher who has become very popular in Detroit. Her singing wins her a record contract with Columbia Records, where the influential producer John Hammond (Tate Donovan) positions her as a jazz singer on a series of uninspired albums that eventually catch the eye and ear of a record producer for a rival label, Jerry Wexler (Marc Maron), who has a keener sense of her potential and wants her to record with a group of musicians in rural Alabama.

By this point of her life, 1965 or so, her tutelage had passed from her controlling father to her controlling husband, Ted White (Marlon Wayons). Still in her mid-20s, Aretha already has an instinct for her own potential, but it's been dampened down by the insistence of dominant men that she follow their direction, as meekly and obediently as possible, as expected of any young, Church-raised girl. In Alabama, her husband's ugly, abusive side comes to the fore for the first time, leading to a period that is marked by widespread mainstream popularity, along with divisive troubles in her family.

Montages eventually pass the time to 1972, when Aretha is at the peak of her career, yet perhaps starting to slide downward. It's also when the inner "demons" that have sabotaged her personality for many years raise their ugly heads again, threatening to derail her career permanently. She is married to a loving man, surrounded by her often neglected children, working with her two of fleshly sisters, yet she still must learn to calm those "demons," somehow, in order to find peace and joy in her life.

The episodic nature of each dramatized segment in her life quickly becomes plodding as we wait for her to burst back into song, which is where the film regains strength, before weakening in the next dramatization of life that is meant to teach a lesson of some sort. Director Liesl Tommy is well-experienced in episodic television, which is reflected to a great extent in Respect, her feature film debut. Running some 145 minutes, the subject matter deserves the length, but the deliberate nature of the storytelling works against the ebb and flow that could have lifted the film beyond its conventional restraints.

Kramer Morgenthau's burnished cinematography looks exceptional, capturing a glorious collection of colors and hues and shadows and half-tones. The photography captured my attention immediately and proves itself to be one of the film's greatest assets, second only to Ms. Hudson.

Respect doesn't so much conclude as it ends at a predetermined point in time, allowing the audience to enjoy a few minutes of highlights from the real-life Aretha Franklin, a true genius.

Do you feel this content is inappropriate or infringes upon your rights? Click here to report it, or see our DMCA policy.
Aretha FranklinForest WhitakerJennifer HudsonLiesl TommyMarc MaronUS