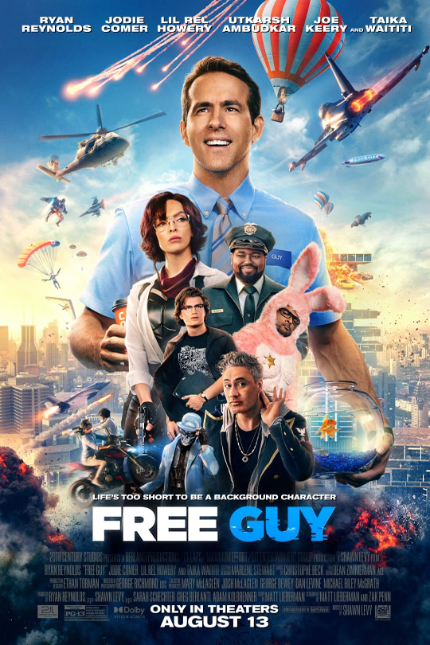 When video games bleed into real life, things get messy.

Filmmaker Shawn Levy has developed and maintained a consistent look and feel to the productions he has directed, always honing his inclinations toward likable characters and hissable villains surrounded by visually-enhanced landscapes, showcased especially in Night at the Museum (2006) and its sequels.

To a less popular extent, he has helmed comedies with a similar aesthetic (and limited or no visual effects) that featured less likable people, but for his first feature film in seven years, he returns to home ground, so to speak, albeit with a more serious strain that fits uncomfortably with his more populist instincts.

Immediately reminiscent of Harold Ramis' superbly wistful Groundhog Day (1993), the film soon reveals an understandable fixation on John Carpenter's They Live (1988), as well as other films to be named later, tossing all the manifest influences into a blender willy-nilly and mixing them with an overabundance of sugar, frosted with several layers of earnest ambition, and layered in fleeting video-game relevance, which is to say, really, none at all.

Ryan Reynolds stars as Guy, a bank teller who doesn't know that he's a background character in a video game. He falls in love with MolotovGirl (Jodie Comer), a leading character in the video game, identified as such because she wears sunglasses. Somehow, Guy gains sentience, only to learn that the dark-haired MolotovGirl is, in reality, a lighter-haired human named Millie, who is out to prove that the pure, simple video game she created with her human partner Keys (Joe Keery) has been stolen by the wildly overdressed Antoine (Taika Waititi) and transformed into the incredibly popular and profitable video game in which Guy is a background character.

If it sounds complicated, plot-wise, that's because it is, overly so, to the point that the film has to stop a couple of times to explain itself to some extent, although certain plot points remain unexplained, perhaps because the credited screenwriters (Matt Lieberman and Zak Penn) could not remember the narrative point and/or lost the cocktail napkin on which the script was originally jotted down upon. Or, perhaps, narrative sense was jettisoned in favor of the busy, busy characters and the continuous action unreeling as a primary background for the leading characters taking action in the foreground.

Guy starts to learn things, and become more than a background character, and in that sense begins to take agency over his own life, which might be even more appealing as a metaphor for all the non-white privileged people in the world, except that he's a video game character. This kinda works as a fantasy, except that the filmmakers also strongly suggest that all the video game characters have more genuine emotions than the real-life humans.

All by herself, Jodie Comer makes the case that humans deserve a break, as far as reality goes, because she shines out brightly as a recognizable human, complete with shades of righteous anger and romantic joy and unrivaled determination and intelligence. When Taika Waititi eventually shows up, he's a blast of singular joy and pleasure because he seems to be ad-libbing some of his own jokes, at least through his vocal stylings -- the way he slings around and bends lines of dialogue that aren't genuinely witty made me laugh.

Probably I'm over-thinking a film that begs to be taken seriously, but not really. Free Guy has the appearance of a grand comic-adventure, which covers up its sentimental heart. Maybe that's the best we can expect in the modern blockbuster age.

Do you feel this content is inappropriate or infringes upon your rights? Click here to report it, or see our DMCA policy.
Jodie ComerRyan ReynoldsShawn LevyUS