The 15th Edition of Japan Cuts kicks off with the U.S. Premiere of Matsumoto Soushi's charming Sci-fi and samurai tinged celebration of cinema, It's a Summer Film! For centerpiece presentation, Kurosawa Kiyoshi's Venice Film Festival winner, Wife of a Spy. Other highlights are an in-person screening of the late Obayashi Nobuhiko's 3 hour swan song Labyrinth of Cinema, 2K restored version of the cult classic, Hiruko the Goblin and Miike Takashi's The Great Yokai War: Guardians.

Without further a do, here are 5 films I was able to sample: 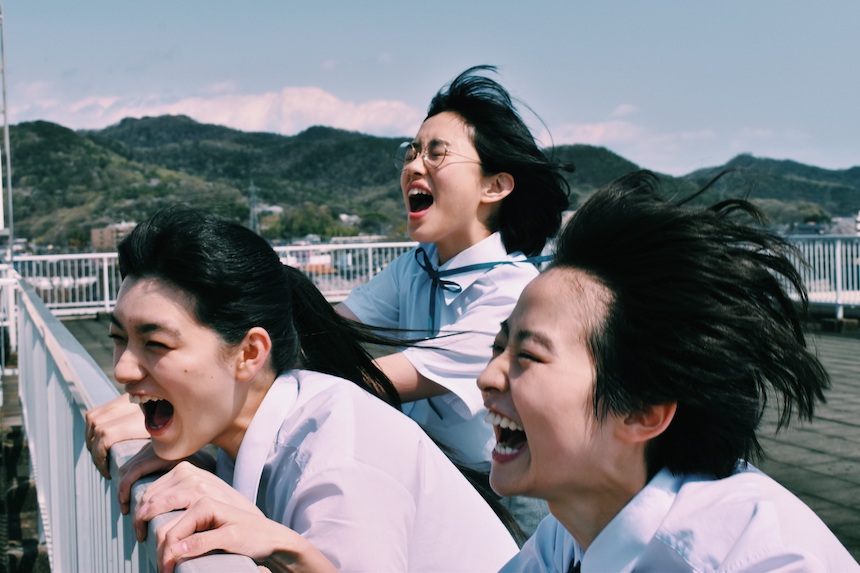 It's a Summer Film!

It's a bubbly love letter to cinema with gaggle of high school girls. It stars Japanese idol singer Ito Marika (former Nogizaka 46 member) as a high schooler, Barefoot, who is obsessed with chanbara films and a Katsu Shintaro (Zatoichi) enthusiast. She is in a school film club but disillusioned by the films they produce - directed by and starring her rival popular girl Karin and her entourage. Barefoot decides to make her own samurai film to counter Karin's saccharine rom-com at the year end screening. With her best friends - Kendo champ Blue Hawaii and sci-fi nerd Kickboard and a rag-tag film crew, Barefoot embarks on a harrowing journey of indie filmmaking. Even though she prefers brusk hero than a pretty boy type, Barefoot can't stop falling for her main actor Rintaro, a handsome time-traveling stranger she chose as her main actor in her film titled, "Samurai Spring." You see, in the future, there are no such things as movie theaters, movies are only 5 seconds long and the traditional notion of cinema is non-existant. She needs to save the future of cinema! It's a Summer Film! is a cute, airy comedy geared towards Stranger Things crowd. 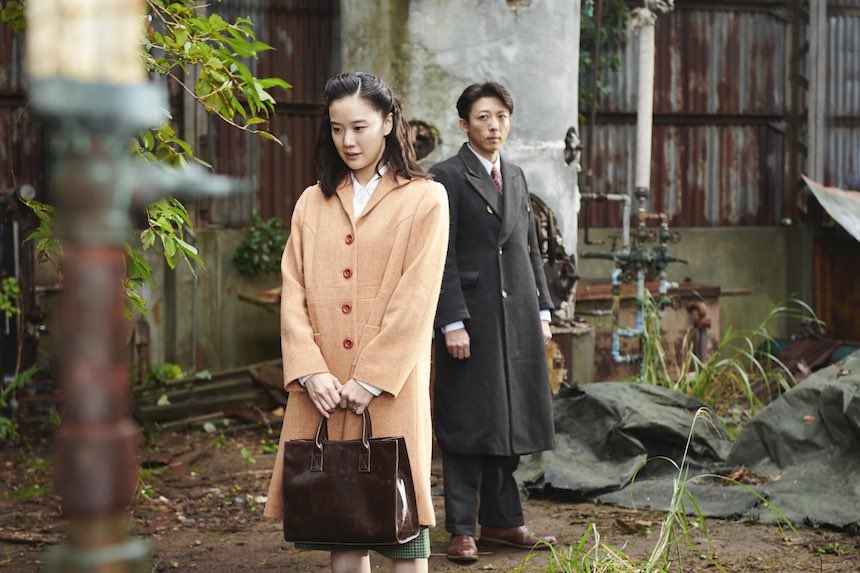 Wife of a Spy
(Centerpiece Film)

Satoko (Aoi Yu), an unassuming young housewife of a wealthy merchant suspects that her husband is involved in something dangerous. The year is 1940. The place is Kobe. And Japan is slowly hurtling toward an authoritarian nightmare ahead of World War II. Kurosawa Kiyoshi directs this period thriller off the script written by Yamaguchi Ryusuke and his writing partner Nohara Tadashi (Happy Hour, Asako I & II) .

Wife of a Spy involves atrocities committed by the occupying Japanese army in Manchuria including experimentation of biological weapons on civilian population. It's a rather straight forward wartime intrigue with a stellar performance by Aoi as an innocent woman who has her blind devotion to her husband tested when she becomes embroiled in international espionage. The film might not feel like the usual KK film, but it's a solid one nonetheless. 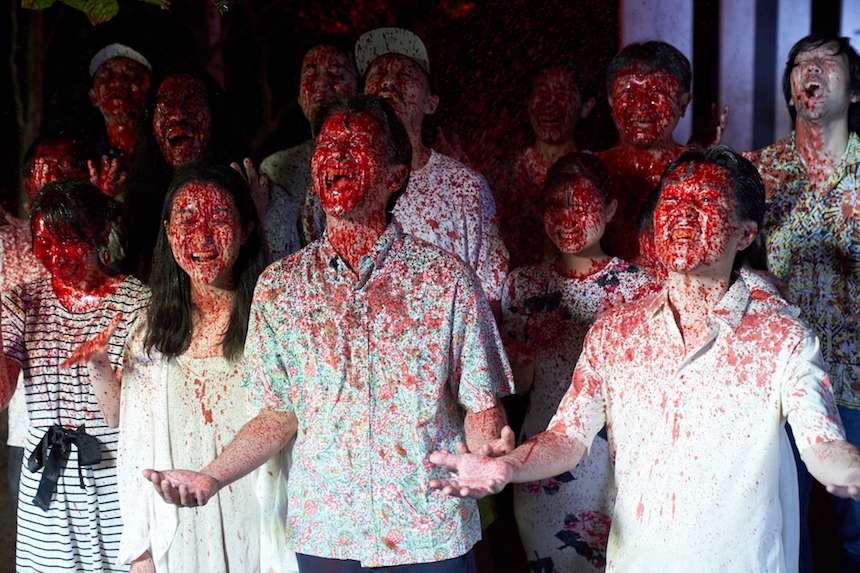 Moving is never easy and letting go can be even more difficult. It's moving day for the Sasayas from their large opulent house because of dad's gambling debts and bad investments. While packing and being nostalgic about mementos strewn about the house, disaffected Akane, the daughter of the family, unwittingly tweets that there will be a party in the empty house. So starts Yamamoto Masaki's madcap comedy Wonderful Paradise. There will be several dead bodies, a gay wedding, a funeral, The Thing inspired coffee bean monster, moving statues with laser beam shooting eyes, strippers, a choreographed dance number, traditional singing, ghosts, synchronized sex scenes, rebirths, a kid turning into a tree branch, a makeshift drug lab, a yakuza gambling den.... By the end of it, Sasayas learn something about life and themselves and finally let things go. Life is one big party. 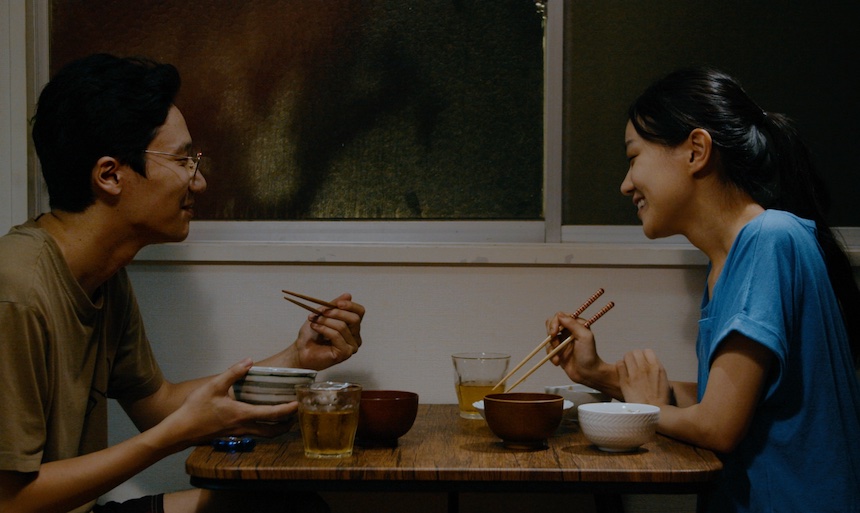 Mari and Mari plays out like a Murakami Haruki novel. Norio (Maehara Kou) is a mild mannered 30-something working at a small casting agency. He is very much in love with Mari (Nao), his long time live-in girlfriend. Their almost nauseating lovey-dovey behavior is an easy target for both ridicule and envy from his co-workers. They even have a corny song of their own that they hum to each other. Then one day, Mari disappears and is replaced by a childlike girl, also named Mari (Amano Hana). This new Mari doesn't remember where she came from. She just materialized in his apartment. Norio looks for his old Mari everywhere to no avail. He demands the new Mari to leave but she always returns.

In a very subtle manner, when it comes down to it, director Yamanishi Tatsuya seems to suggest that it's not a particular person but rather the idea of a person in a certain mold that you fall in love with.

As the new Mari sticks around, Norio begins to accept her as his girlfriend. They sing the same song, make fun of each other's silly habits. It's an intriguing film by first time director writer Yamanishi. 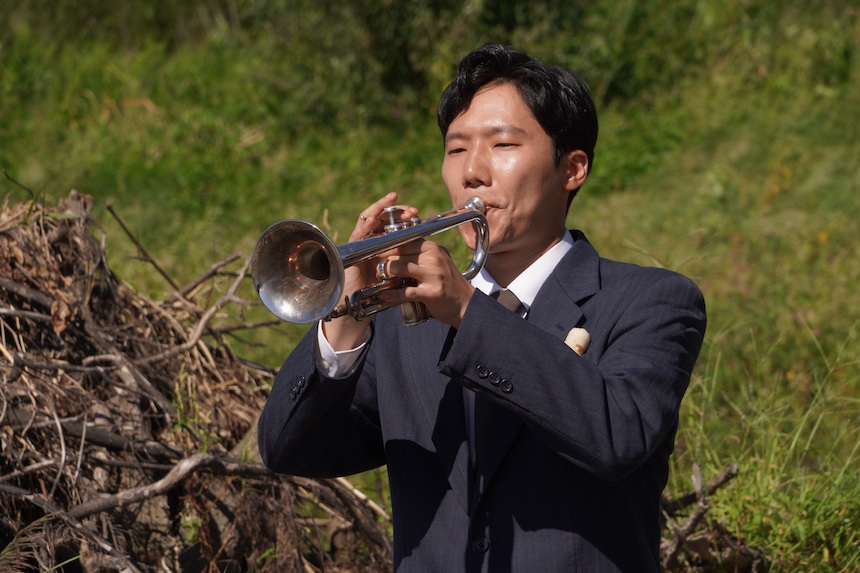 Ikeda Akira's droll anti-war film The Blue Danube starts with Tsuyuki (Maehara Kou) waking up at the sound of a marching band. He reports to the army barracks for his 9 to 5 shift, wasting his life away and shooting at invisible enemies across the river like a clockwork. "Do as you are told without question" rules this town and everyone follows its rigid army style way of living. No one remembers how long the town has been at war with its neighboring town or the reason for the conflict. They just assume that the town across the river is horrible and its people are savages.

With intentional stilted movement and delivery of the actors, repetitions and absurd humor, Ikeda pokes fun of Kafkaesque bureaucracy combined with blind trust in inept authorities and fear tactics instilled in people's mind in the war time. The Blue Danube highlights the meaninglessness of war.

Do you feel this content is inappropriate or infringes upon your rights? Click here to report it, or see our DMCA policy.
Festival PreviewsJapan CutsJapanese Cinema