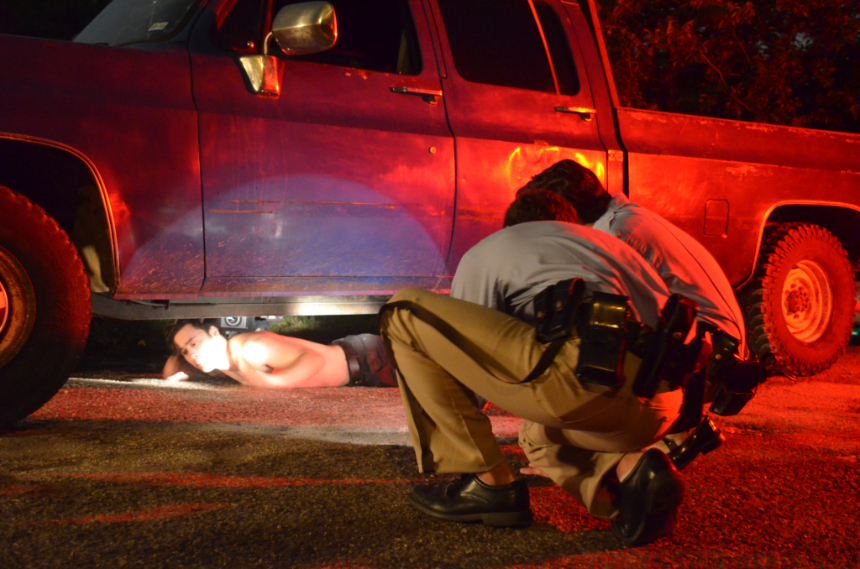 With belching refinery towers against a setting sun being one of its singular widescreen images,  Patrick Forbes cinematic and highly emotional film The Phantom, at times feels like a lost season of HBO's True Detective.

The documentary covers the tragic case of Carlos DeLuna, a troubled, poverty-stricken latino man in Corpus Christie Texas, who was arrested in 1983 for the brutal stabbing murder of gas station attendant Wanda Lopez, and though a series of public defenders and appeals was given the death penalty and executed shortly after. In the ever increasing American subgenre of 'miscarriage of justice' (see also: Paradise Lost, The Thin Blue Line, Making A Murderer) this one is set apart, because it involves the death penalty. There is no 'release' of DeLuna after justice is finally served.

Forbes and his editing team seamlessly mix grotty 1983 video footage, with slick re-enactments, stock footage, and mise-en-scene interviews in a crisp, ever-moving melange of information and emotion. Most of the players, from the cops, coroners, court reporters to the lawyers, and the family, are still with us, and have themselves reflected heavily on the toll of the death penalty. Perhaps most affecting is Carlos' brother, who was frustrated with all the trouble that seemed to find his young brother 40 years ago and took a hands off approach, until his brother was gone, erased by the State of Texas.

Carlos DeLuna was no saint, with petty assaults, drunken behaviour and other crimes under his belt. Did he deserve to die for the crimes of his 'Tocayo,' his doppelgänger, a look-alike with a much worse, and much longer criminal history?  The Phantom makes a strong case against the barbarism of the death penalty, and an even stronger case against execution on only eye-witness testimony.

The momentum and narrative rhythms ebb and flow from outrage to empathy to sadness. Hanlon's Razor, "Never attribute to malice that which is adequately explained by incompetence or disinterest," is likely the case here, with a systemic failing across policing, jurisprudence, appeals, social safety net, and media coverage.

Perhaps O.J. Simpson's lawyer said it best, "In this system, you are innocent until proven broke. When you are broke, you are pretty much finished. That's the way it is, not the way it's supposed to be." Carlos DeLuna started broke; his family, who were living in the 'wild west projects' of a wild west town in 1983, are another power example of such. As tragic as this is for all parties, there is no denial that The Phantom is a whip-smart piece of retroactive justice-by-finesse. It makes its case, for DeLuna and against the capital punishment, with the flair of a seasoned maestro.