Sara Luna Zoric, Lazar Dragojevic, and Ernad Prnjavorac star in an off-beat drama from The Netherlands, written and directed by Ena Sendijarevic. 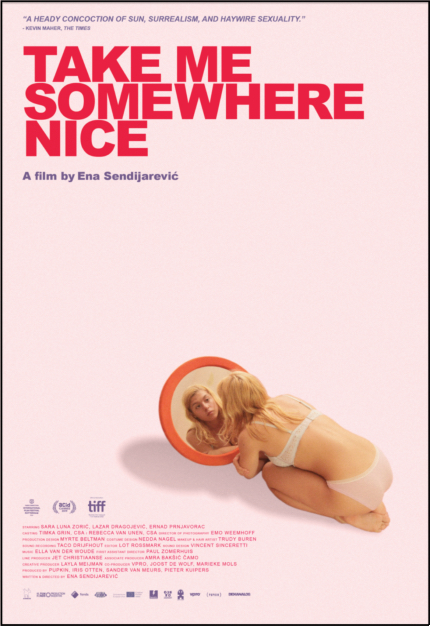 Another promising talent taking the bow on the stage of the largest Dutch cultural event that is the International Film Festival Rotterdam [in 2019] was Bosnian-born and Amsterdam-based filmmaker Ena Sendijarević. Sendijarević introduced her fiction feature-length debut in the main competition under the programming umbrella of Bright Future, voicing clearly the programmers' expectations.

The film's opening suggests Sendijarević to be an energetic and playful director preoccupied with the form, as odd angle shots line up in unusually rapid editing for talking scenes. The notion won't be contradicted in the following minutes, quite the contrary, the stylistic fascination triumphs. However, far from evoking any avantagardish flair, the writer-director maintains a purposeful ratio of mercurial camera positions, using mostly fixed shots, as to not alienate viewers with stroboscopic effect.

Take Me Somewhere Nice resembles the latest wave of the constantly shifting genre of coming-of-age films, yet it does not share the controversial nature of Rene Eller´s transgressive Us (IFFR 2018), the genre hybridity of Julia Ducuournau´s Raw, nor the sardonically experimental formalism of Daan Bakker´s Quality Time (the Tiger competition at IFFR 2017). 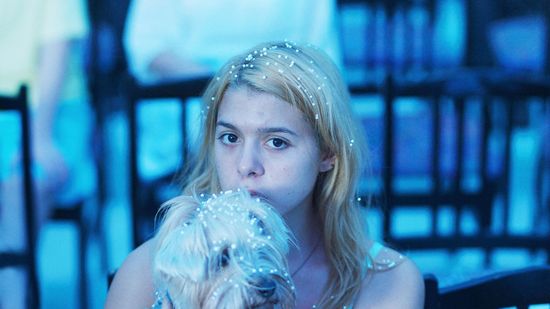 The film's main character, fearless Alma, due to unspecified age, her demography can be considered a young-adult who might be inspired by the writer-director herself. She decides to bid a temporary farewell to the Netherlands, her adopted home country, to visit her hospitalized and estranged father, in her country of birth Bosnia, one last time. Upon her homecoming, a culture shock does not seem to have that great of an impact.

She finds lodging in cousin Emir's ramshackle apartment and attention from her cousin's friend Denis. As both layabout gentlemen fail to provide her with transportation service to the hospital, Alma hits the road via public transport, meets odd characters, hears pearls of wisdom ("artist or whore, it's the same") and gets kidnapped in good intention on the road.

Sendijarević does not portray Bosnia as a polar opposite to the Netherlands, which can be tempting given the socio-economic and political gap between East(ern) and West(ern) Europe, and does not even play the usual stereotypical cards. In fact, she goes rather against the type of the expected Eastern European or Balkan depiction, the same she eschews any kind of bucolic idyll portrayal of the country torn by Yugoslav wars.

As a matter of fact, as Alma comes from the young generation and from abroad, Take Me Somewhere Nice remains free of references to Bosnian genocide, wars or the lackluster economic development. Sendijarević bypasses explicit references to geopolitical dimension, remaining dedicated instead to the central protagonist and her peers, thus filtering the country and life in general through their eyes; thus the lack of historical memory. The decision to not let past events and their fallout define the narrative can be more of a sign of a new beginning as ignorance of history and the country's legacy.

As Alma is stuck between two countries, so is she stuck in limbo in between youth and adulthood -- not anymore a kid, albeit not yet an adult. Alma embodies waywardness, aimlessness and what could be defined as uprootedness, although that notion gradually loses legitimacy in an increasingly globalized society. 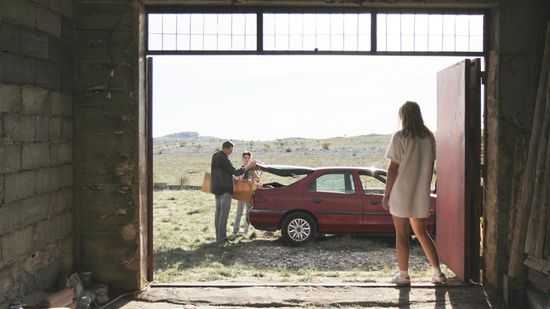 Even though Alma is the central subject and the story's main conduit, Take Me Somewhere Nice incorporates the opinions of her generation as well. The protagonist, her cousin Emir and Dennis create a triangle of rotating attitudes towards the home country, and Sendijarević observes the dynamics that the different viewpoints create. Alma represents a prototype of an immigrant finding a new life outside Bosnia, yet still harboring certain sentiments to the birth country; Emir is the nationalist type; and Dennis is a dreamer fantasizing about leaving Bosnia for, hopefully, a better life.

The generational shift Take Me Somewhere Nice embodies in substance leaks on the surface in the overall stylistic approach as well as the film's aesthetics. Sendijarević topples the convention of bitter Eastern European social dramas on the precipice of existential crisis and instead renders the story in a light, colorful palette. Instead of gloom and cynicism, the humor of a lightly absurd veneer emerges as an antidote, though as in Greek drama, a tragic element is preserved in the film's anticlimactic finale. The writer-director charts a different direction in her bubble-gum road movie feature debut.

The opposition in the formal and storytelling norms to Eastern European dramas may be most likely the product of her ex-pat status. The distance from the country she is depicting and a healthy dose of nostalgia her protagonist channels pushes Take Me Somewhere Nice to a spot of a new-gen Eastern European dramedy.

Review originally published during the International Film Festival Rotterdam in February 2019. The film opens in U.S. theaters and virtual cinemas on Friday, June 11, via Dekanalog Releasing.

More about Take Me Somewhere Nice