Jacob Tremblay, Jack Dylan Grazer and Sacha Baron Cohen star in an animated adventure, streaming on Disney Plus as of Friday, June 18. 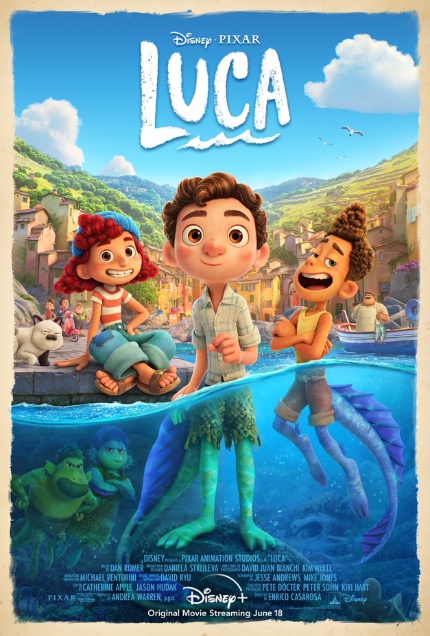 Over 26 years and 23 films — a track record without parallel, except maybe Disney’s early Golden Age run when it was the only animation studio in Hollywood — Pixar Animation Studios, a longtime subsidiary of Walt Disney Studios, but separate from Disney's animation division, has consistently delivered emotionally engaging, all-ages entertainment wrapped in cutting-edge animation and universal, life- and family-affirming lessons.

Not surprisingly, that kind of track record has made Pixar synonymous with quality storytelling unmatched by competitors in the industry. Pixar’s 24th film, Luca, a poignant, bittersweet coming-of-age tale set in a fictional, post-World War II, coastal town on the Italian Rivera, reconfirms Pixar’s first-among-equal standing in the industry.

Directed by Italian-born, veteran animator Enrico Casarosa (the Oscar-nominated short La Luna), Luca centers on the title character, Luca Paguro (voiced by Jacob Tremblay), an underwater preteen with an abiding curiosity about the world above the sea. Casarosa and his screenwriting team, Jesse Andrews and Mike Jones (Soul), contrast Luca’s naïveté and inexperience with the naturally occurring fear and anxiety his mother Daniela (Maya Rudolph) channels into overprotection bordering on suffocation.

Luca’s easily distracted father, Lorenzo (Jim Gaffigan), defers to Daniela when it comes to parenting and how to handle Luca’s increasingly independent behavior, up to and including Daniela’s reactionary decision to send Luca to live with his deep-sea uncle, Ugo (Sacha Baron Cohen, in a scene-stealing cameo), after Luca returns late from his fish-herding-related chores.

Casarosa pairs Luca with Alberto Scorfano (Jack Dylan Grazer), another preteen monster who’s adjusted to living on land among humans, largely because subaquatic dwellers like Luca and his family naturally shapeshift into humanoid form once they’re out of the water. The potential for discovery (water is everywhere) adds a layer of suspense to Luca and Alberto’s adventures, especially when they decide to venture to the nearby town of Portorosso (an intentional nod to animation maestro Hayao Miyazaki’s Porco Rosso), to obtain their dream machine and all-around symbol of freedom, a Vespa scooter.

At times, Luca turns into an extended ad for the Italian-made, pastel-colored Vespas, but those asides or tangents go down almost as smoothly as the cool gelato Luca and Alberto immediately learn to love on hot summer days.

The Vespa-oriented plotline eventually involves Giulia (Emma Berman), a slightly eccentric local girl, obsessed with winning an upcoming triathlon against Ercole Visconti (Saverio Raimondo), her nemesis, town bully, and five-time champion of the yearly competition. While Ercole throws his ego around, publicly humiliating Giulia, Luca, and Alberto (the latter two for their persistent fish smell), at every opportunity, an uneasy platonic triangle develops between the trio as Giulia ignites Luca’s love of learning, astronomy in particular, and a jealous Alberto slowly realizes that his friendship with Luca, based on risk-taking and adventure-seeking where Alberto always took the lead, will have to change and grow to survive the summer.

Far more straightforward and less convoluted than Pixar’s more recent efforts, Luca turns less on the never-in-doubt outcome of the triathlon or the inevitable discovery of Luca and Alberto’s non-human natures by Portorosso’s townspeople than on the evolution of their friendship and the inclusion of Giulia as an equal member. The world doesn’t hang in the balance. Portorosso won’t live or die as a community based on their actions, but for Luca, Alberto, and Giulia (and by extension, audiences channeling their inner preteens), the stakes couldn’t be higher or more important. Their experiences, while particular to a fictional, fantastical time and place, are also just as universal.

Like comic-book characters ranging from Marvel’s decades-old X-Men, feared and hated by those they’ve sworn to protect, to the human-animal hybrids of Netflix’s recent adaptation of Jeff Lemire’s Sweet Tooth, Luca and others like him represent the outsiders, outcasts, and pariahs, excluded from so-called “normal” society for their differences and inability to conform to rigid norms. It’s a simple, if malleable, metaphor that can and will be interpreted in a multitude of ways by audience members from disparate backgrounds, but finding the universal in the particular (and vice versa) has always been key to Pixar’s long-term success.

One of the other keys to Pixar’s success, the emphasis on deep world-building fueled by continuing innovation in computer animation, is also on display in Luca. From Luca’s underwater home to Alberto’s hideaway and on to the tactile sensuality of Portorosso’s curving cobble-stoned streets, staggered homes integrated into a mountainside, and Giulia’s rustic home, Luca offers visual pleasures in (over) abundance. It’s easy to understand why Luca and Alberto fall in love with Portorosso, its routines, and rhythms because the audience, in Luca and Alberto’s place, obviously would do the same.

Luca will be released direct-to-streaming on Disney+ on June 18, along with a simultaneous theatrical run at the El Capitan Theatre in Los Angeles, California. 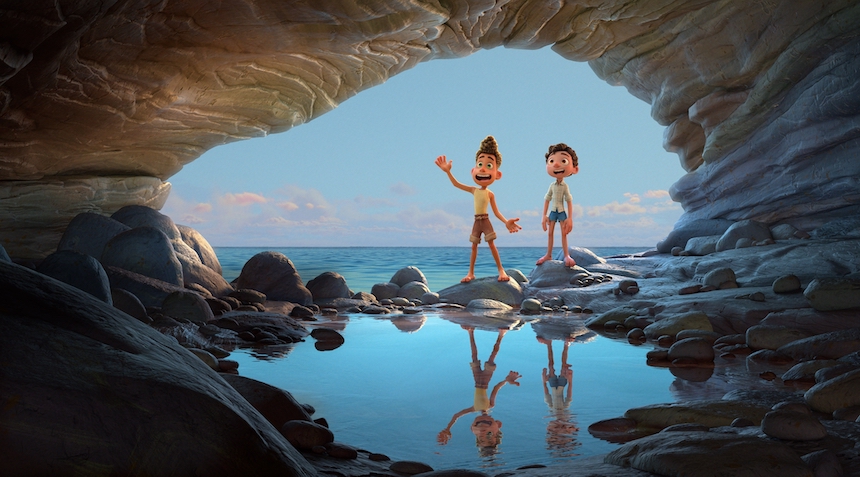