Director George A. Romero's horrifying 52-minute 'informercial' stars Lincoln Maazel, Harry Albacker, and Phyllis Casterwiler. It will be available to stream on Shudder as of Tuesday, June 8. 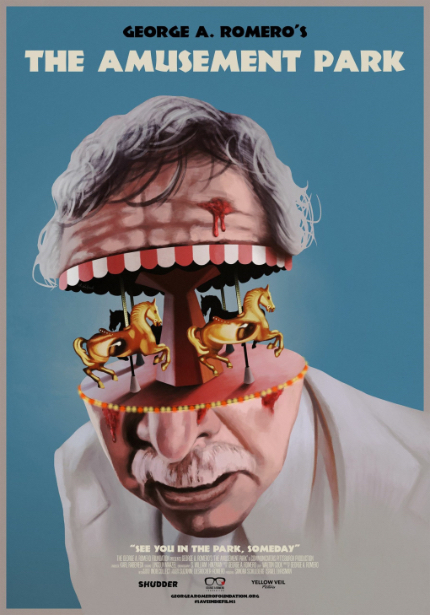 The world of horror fanatics was in shock and disbelief after hearing about the death of George A. Romero, one of the foundational filmmakers of what we currently understand as modern horror.

His films, like the "... of the Dead" series, Creepshow and Martin have defined the taste and even the landscape of independent filmmaking, both horror and not, for the rest of time. Fans have had to live in a world where there would be no newer zombie films that so clearly explained and chronicled the days in which we live. But there was something else, lurking in the darkness of the past, that was waiting its turn to rear its head into our devastated world.

It was when he was finishing up The Crazies that he was approached by the Lutheran Society, who wanted to make an infomercial film about the subject of elder abuse. What he turned in was considered to be too shocking for it to be shown... until now. After some showings in 2017, the 52-minute film that tries to warns us against hurting old people is finally widely available through the streaming platform Shudder, restored and trying to show us what was so wrong with it back then.

Turns out that Romero knows how to make a film that is hard to watch. Most of his movies have their protagonist enter extremely difficult situations, facing tense moments, hard decisions to make, morally ambiguous choices, and most of the time, it doesn't go well for them. We suffer alongside them, we struggle and we squirm as we watch them make the wrong decision again and again. This time, it's no different, The Amusement Park has us follow an elderly man (played by Lincoln Maazel), sharply dressed in white, as he stumbles upon a door that leads him to an amusement park that seems catered to make him suffer every step of the way.

In the amusement park, most people don't pay attention to the man, while the vendors and park workers try to scam him. His opinion is never listened to, and he sees how other people from around his age are also treated badly, shuffled around, accused and even hurt. The film makes you feel every one of those moments, specially when we see them or our protagonist get hurt. The violence is brutal, and seeing a bunch of old people get hit, kicked, punched, robbed, mistreated, insulted and much worse... isn't a kind sight.

But, after all, it's an infomercial, so it tries to put its point across in the most blunt way possible, and if you have to see blood and cuts, and a tired crying old man, to understand what they're going through, I guess it's what Romero thought he had to do. Obviously, the Lutheran Society thought it was too much, but I absolutely feel that if this had been released in 1973 as intended, it would be among the greatest cult films ever, one of those precious gems that fans and scholars go back to once and again as a curiosity object, a product of its time and its author.

But we're seeing it today, and it hits differently. The infomercial structure and intent are a bit too obstrusive in the way of Romero making more daring stuff, even more than he got away with (even if he actually didn't get away with it in the end), and the message is muddled, due to the effectist methods used by the filmmaker. There are moments in which the metaphors are too obvious, while others that they're too obscure, where that uneven didactidism doesn't sit well with the overall violence and nasty things that we see happen on screen.

Nevertheless, it's a miracle that we're able to see what we're seeing here: a new George A. Romero film. We shouldn't be so lucky after all that we do with our elders (or that's what I thought after I finished it up, I felt extremely guilty for absolutely no reason). It's an obligatory watch for anyone who has seen and loved one of his films.

His humor, his nastiness and his biting satire are there, mixed around with that puritan discourse that tries to move us to change. But alas, it's not a bad or a wrong message. It's just... you know, a message that's being hammered in. Your head might start hurting after so much hammering.

The film will be available to stream on Shudder as of Tuesday, June 8, 2021.

Do you feel this content is inappropriate or infringes upon your rights? Click here to report it, or see our DMCA policy.
George A. RomeroHarry AlbackerLincoln MaazelPhyllis CasterwilerShudder

More about The Amusement Park