Jimmy Levar and Christina Chu-Ryan star in a mysterious yet compelling fantasy, directed by Stephen Rutterford. 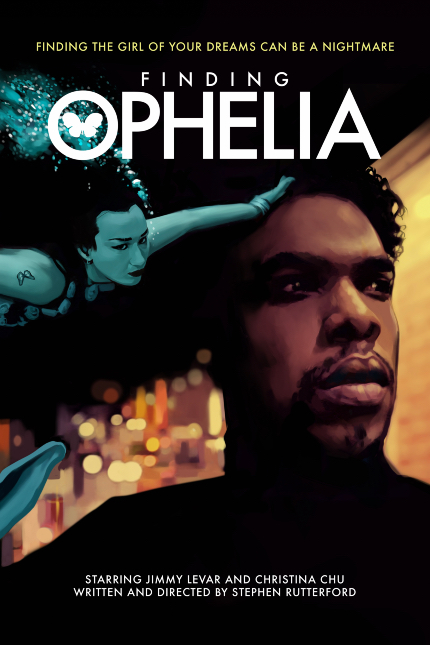 Finding Ophelia
The film screens at Cinelounge Sunset in Hollywood from today through June 24. It will be available on Amazon Prime, Google Play & TubiTV on June 23. Visit the official site for more information.

Strange, elusive, perplexing and often downright weird, Finding Ophelia is more about the search than the destination.

Written and directed by Stephen Rutterford in his feature debut, the film begins with a lengthy meditation. Only gradually did I realize it was a dreamy nightmare of sorts, as experienced by William Edgar (Jimmy Levar), the type of nightmare that might come after a night of drinking or drugging.

William, however, does not appear to suffer from either of those types of delusion. Rather, he's been experiencing something that appears to incorporate a romantic fantasy about a beautiful woman named Ophelia (Christina Chu-Ryan) who makes repeated appearances in his dreamy nightmares, yet remains elusive from his grasp. Yearning to see her in real, daytime life, he keeps returning to his dreams and/or nightmares, hoping for a repeat viewing.

As a commercial artist in the advertising business, William remains in demand by one client, at least, even though, lately, he has become consumed by his dreamy nightmares. Clearly, he's a talented artist, even if he finds it difficult, or even impossible, to apply his usual focus to anything other than what it is that is eating up his nighttime visions.

The mystery is compelling, which plays against the very quiet, subtle manner in which actor Jimmy Levar inhabits the character. He doesn't storm around outrageously in his own self-made tempest; he's a quiet sort of fellow, not given to outward displays of emotion, which poses a challenge for those few who are close to him, as well as the audience.

After all, we are conditioned to expect a narrative that provides easy clues and/or meanings and intentions which are easy to grasp. Finding Ophelia does not traffic in such easy symbolism. There are no bombs or explosions or weapons or fight scenes or splashy action sequences or fiery helicopters or anything like that.

Days after watching the film, however, my mind is still trying to work out exactly what happens and why it happens. And what about William? And Ophelia? Where does fantasy end and reality begins? And should I care?

Do you feel this content is inappropriate or infringes upon your rights? Click here to report it, or see our DMCA policy.
Christina Chu-RyanIra GrossmanJimmy LevarStephen RutterfordUS