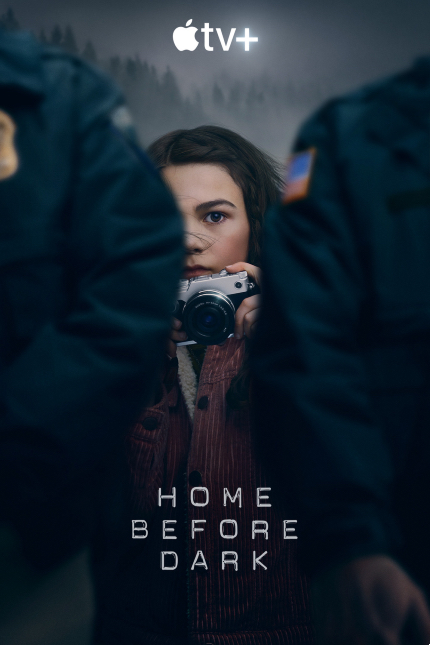 The family that solves crimes together, stays together.

Moving cross-country can be a traumatic experience for a family, especially when it's from a big city to a small town which hides many secrets.

Created by Dana Fox and Dara Resnik, and inspired by a true-crime podcast, Home Before Dark is told from the perspective of 9-year-old Hilde Lisko (Brooklynn Prince, The Florida Project), who is a journalist, as she tells anyone who will listen, and many who will not. Raised by loving parents, sandwiched between an older sister who is dealing with adolescence and a younger sister who loves to play, Hilde has forged her own identity as a curious child who loves to investigate. And write.

Her father, Matt Lisko (Jim Sturgess), is an investigative journalist who worked for a major newspaper in Brooklyn, New York, until he was fired, prompting the family to move back to Matt's family home in Erie, Washington, where they can live rent-free, since Matt's father Sylvester (Reed Birney) is now living in a nursing home. Hilde's mother, Bridget Jensen (Abby Miller), is an attorney who took time away from her profession to raise her family, and is fully prepared to establish herself again as a lawyer to support everyone financially while Matt writes a book.

Creator Dana Fox is known for smart and snappy comedies -- she created the TV show Ben and Kate, for example, which I loved -- and Home Before Dark features an abundance of smart and snappy dialogue, though it avoids the typical type of talk that has littered far too many TV detective shows, building deeply upon the real-life premise of a precocious child 'playing' a kid Sherlock Holmes.

Instead, the series fleshes out the family; Hilde is, yes, precocious, but she's also a child who loves her parents and sisters deeply and is not afraid to show it. Both parents and older sister Izzy (Kylie Rogers) are shown to be likewise emotional creatures who are not hesitant about showing their true feelings. "No secrets" is a family motto, and that certainly proves to be true ... for the most part.

For it turns out that Matt Lisko has not been entirely forthcoming about his past, withholding certain terrible things even from his wife, none of which can now be avoided by returning home to a small town where it seems that everybody knows everything. Or do they? Suppositions and assumptions form a big slab of the first season; I've only seen the first six episodes so far, but a good mystery is quickly established, in which a teenage boy was snatched and then found dead in the 1980s. That led to the apprehension and subsequent conviction of a man whose guilt is now not so clear, at least in the mind of young Hilde.

Jon M. Chu (In the Heights, Crazy Rich Asians) directed the first two episodes, which sets the visual template: a richly evocative landscape that relies upon the dark and stormy Pacific Northwest U.S. setting. The Lisko family provides shafts of light that then extends as different characters are introduced and expanded, blowing up small-town stereotypes in a generally family-friendly atmosphere.

This isn't a town or a series that features raving, bloodthirsty lunatics of vengeful creatures of the nights. Home Before Dark suggests that everyone intends to do the right thing; sometimes they do, and sometimes they don't, but their intention is rarely evil.

In this day and age, overpopulated by shows that relish the evil side of life, that's refreshing, especially since the series never makes the mistake of insulting the intelligence of its viewers. This is a family show that makes every member of the family think about their place in the world, and what they can do about it.

Do you feel this content is inappropriate or infringes upon your rights? Click here to report it, or see our DMCA policy.
Abby MillerApple TV+Brooklynn PrinceJim SturgessUS