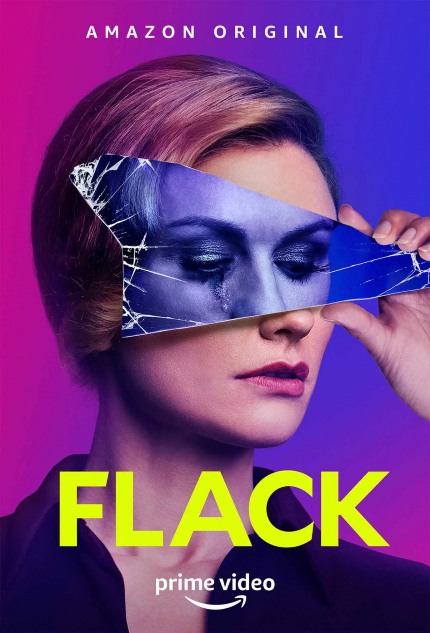 Flack
All 12 episodes of the first two seasons are now streaming on Amazon Prime Video. I've seen all 12 episodes.

By her presence in the lead role, Anna Paquin drew me to Flack, a series about celebrities and the publicists who constantly must fish them out from the deep waters of controversy.

As a writer for a site that focuses on indie and international genre films and television shows, I am happy to work with hard-working publicists, especially those who make me aware of scrappy, promising new projects. Celebrity publicists, however, are not the same thing, which is why the exceptional lead performance by Paquin is so important.

She portrays an American woman named Robyn, who has been working as a "flack" (or, publicist) in London for several years, becoming the most trusted and reliable agent in an agency that is notoriously nasty in its dealings with its clients. The regal Caroline (Sophie Okonedo) runs the show, which is a 'take no prisoners, give me no slack or you'll be sacked' type of agency, which may explain its success.

Robyn's fellow agents include best friend Eve (Lydia Wilson), who has a similar mind-set, while young Melody (Rebecca Benson) is a bumbling newcomer who wants to learn the trade and become as successful as her new mates. Robyn applies the skills she has developed as a flack in her family, especially with her sister Ruth (Genevieve Angelson), who followed her to England but finds it tough going as a mother with a young child and a husband, Mark (Rufus Jones), both of whom need her undivided attention.

Very quickly, creator and writer Oliver Lansley, who is also an actor and plays a drug dealer in the series, establishes a carousing and corruptible environment in which Robyn is indelibly involved. Contrary to perceptions of others, she harbors a desire to settle down with her partner Sam (Arinzé Kene). Sam wants a child, and Robyn says she does, too, but in secret she's still quite wobbly on the issue, especially due to her addiction to drugs and drink.

It's quite a combustible atmosphere, filled with fast-talking publicists, slow-reacting celebrities, and clueless family members and friends, such as they are. Through it all, Anna Paquin remains the fulcrum of the show, yet it's clear that she is breaking down and that the prospect of utter ruination of her life is always in the offing.

I'd not describe the show as "easily entertaining," even though Lansley jams in a multitude of keen observations on celebrity culture and the media, tarted up with many attractive people and dramatic insights on the true price of everything that everyone is chasing. Maybe "sobering" is a better description.

Do you feel this content is inappropriate or infringes upon your rights? Click here to report it, or see our DMCA policy.
Amazon Prime VideoAnna PaquinLydia WilsonOliver LansleyRebecca WilsonSophie OkonedoUK