Now Streaming: DOM, Police, Drugs, and Thieves, All in the Family 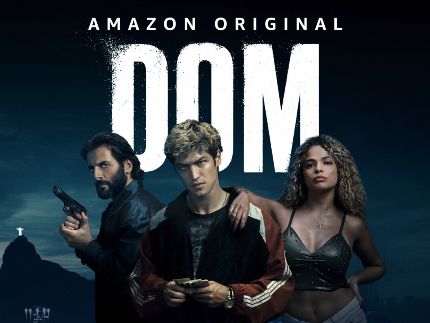 Crime-fighting father versus drug-addicted son; who will win?

Late one night, an angry father charges into a dangerous neighborhood where a wild party is rocking. Claiming to be a police officer, he pulls a firearm and shoots into the air, eliciting an instantaneous response as dozens of men each pull their firearms. He is looking for his son, who is snorting cocaine and getting busy with his girlfriend in a nearby alley.

The electrifying opening sequences in Dom, created by Brazilian filmmaker Breno Silveira, give way to the aforementioned father, Victor (Flávio Tolezani) bringing his 20-ish son, Pedro (Gabriel Leone) home and handcuffing him to his bed. Still seething, and wondering how things could ever have gotten this bad, Victor breaks out his personal computer and begins writing.

It's 1999 in Rio de Janeiro, and so Victor thinks back upon his own youth, rewinding to 1970 and contemplating how his own fractured relationship with his father, a materially successful businessman, led him to take a course that would quickly collide with the introduction, and increasing popularity, of cocaine. At the age of 20-ish, Victor (played by Filipe Bragança) dreams of making a living, somehow, as a diver; he lives on the coastline, and swimming in the ocean brings him calm and tranquility.

Very soon, however, something he discovers by chance in the ocean resets his life, bringing him into contact with military official Arcanjo (Wilson Ribelo), who promptly recruits him as a new and fresh face in undercover investigative activity to pursue the burgeoning illegal drug trade. The first episode settles down into a somewhat stodgy, by-the-book historical recreation -- the series is inspired by a true story -- but the second, third, and fourth episodes push back against expectations, developing parallel narratives that track Victor's development from a naive youth into a sage, weary man, pushing 40 and always running after his son, who quickly develops a taste for cocaine.

The manifest parallels in the time-spanning narratives allow for variance in what might have been expected, especially as Pedro seizes onto the criminal crew of his new girlfriend Jasmin (Raquel Villar) and makes them his own, while still battling his powerful drug addiction. Pedro, who is known as Dom, has different motivations than his crew, who all come from the favelas and are driven by the notoriously dangerous neighborhoods in which they have been raised.

Dom is not like them. Raised in privileged circumstances, especially by comparison with his lifelong friend Lico, Dom has a steely determination to succeed, not only to be able to feed his drug addiction, but to quench his other desires. Money and sex come along with that, too, but those are not his main drivers: there's something else that keeps pushing him forward, and the series makes plain that it is something that he inherited, by nature or nurture (or lack thereof) from his father.

What do father and son have in common? Through the first four episodes, Dom asks that question from a variety of perspectives; some are glaringly obvious, while others are more subtle and probing. I haven't had time yet to finish the series -- running about an hour per episode, it's one of those shows that's probably best not endeavoring to binge -- but I fully intend to do so.

Do you feel this content is inappropriate or infringes upon your rights? Click here to report it, or see our DMCA policy.
Amazon PrimeBrazilBreno SilveiraFilipe BragançaFlávio TolezaniGabriel Leone