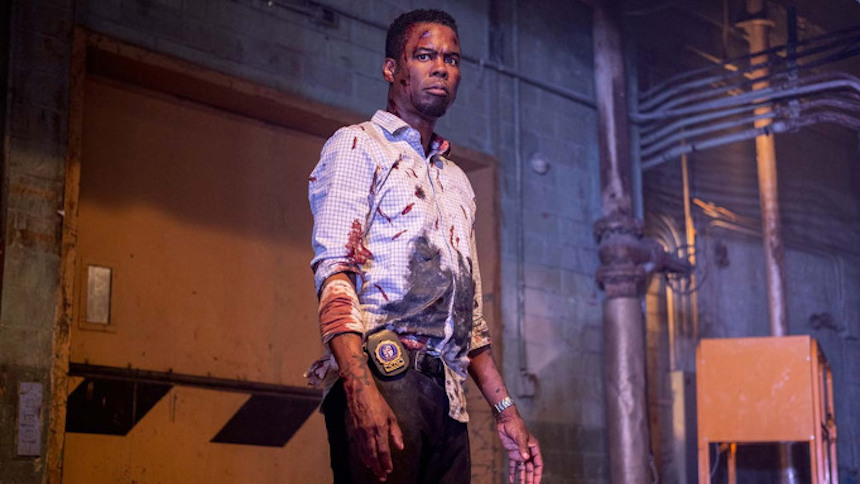 Even more bizarre or head-scratching than Chris Rock, a comedian and comedic actor with a limited background in dramatic roles, headlining another belated foray into medieval torture devices, dismembered body parts, and other semi-recognizable human remains in the long-running Saw universe, Spiral (aka Spiral: From the Book of Saw) is that an otherwise moribund franchise that last catapulted an entry onto movie screens four years ago, still has something to offer contemporary audiences beyond realistically depicted human anatomy (and more of the same). Spoiler: It does, but in the clumsy, over-obvious way that earlier Saw entries have attempted to do, with varying levels of success.

This time out, the Saw series tries to go super-topical, shifting its focus from a Jigsaw-inspired copycat killer to the top-to-bottom corruption permeating an off-brand police department. The cops range from the generally corrupt (i.e., taking bribes, robbing drug dealers and pocketing the proceeds) to indiscriminate killings of innocent civilians as part of an urban pacification plan, “Article 8,”designed to safeguard the captains of industry and capitalism from the poor, downtrodden, and otherwise dispossessed. Only one good cop, one good honest cop, Detective Ezekiel "Zeke" Banks (Rock), stands and/or sits between the corrupt cops and a terrorized civilian population. Except, of course, that he really doesn’t.

Banks might be one good cop among a precinct practically infested with bad cops, but he spends his days going off-book and taking down violent criminal gangs or bitching and moaning about how he can’t trust any other officer to watch his back or protect his six. Years earlier, Banks crossed the thin blue line and turned in a witness-murdering cop, putting himself in perpetual peril as a result. Banks’ father, Marcus (Samuel L. Jackson), a onetime police chief, tried to protect the younger Banks, but forced retirement got in the way, Potential allies are few and far between, but they include Angie Garza (Marisol Nichols), the precinct captain, and William Schenk (Max Minghella), a detective-in-training forced on Banks by his superiors.

The been-there, seen-that elements of Banks' professional and personal story take a necessary backseat to Jigsaw 2.0’s murderous scheme, a scheme squarely aimed at the corrupt cops who turned their backs (mostly) on Banks and on the unnamed city they live, work, and soon enough, die in, beginning with an old associate/partner of Banks, Det. Marv Boswick (Dan Petronijevic), who, following the stunning illogic typical of the Saw series, follows a low-level thief into an underground tunnel and smack into the new pig-mask-wearing Jigsaw. Almost immediately, Boswick regrets the decision (the audience, however, doesn't), becoming the first victim to perish in spectacularly gruesome after being given the obligatory “Would you like to play a game?” prompt from a nearby video recording.

Boswick’s IQ may not cross over into three digits (also standard for the series), but he’s not alone   among his police brethren to make the absolute worst decision — breaking protocol and investigating a possible clue or crime without backup or notice — at the worst possible time. Long the principal, if not the only reason, for the Saw series’ existence, the medieval torture devices introduced at varying intervals have their intended effect: Creating the mix of horror, revulsion, and even terror that Saw fans long ago came to expect from the series, though not everyone who awakens strapped into said medieval torture device actually deserves to be punished so brutally or with such finality. In the Saw universe, you’re either torture fodder or, if you’re extremely lucky, you live long enough to watch the villain walk before the end credits roll.

Apparently made at his own instigation, the decision to cast Rock in the lead may have been a bold one, but it wasn’t necessarily the right one. Banks’ early riff about why Forrest Gump wouldn’t be made today (the reasons are too tedious to mention here) feel like they were lifted from one of Rock’s lesser stand-up specials.

At least early on before everything goes pear-shaped, Banks repeatedly, tiresomely slips into Rock-inspired monologue mode. Only later, when Jigsaw 2.0 begins to wrack up a truly impressive body count does Rock-as-Banks finally begin to take the film he’s in seriously. By then, though, it’s too late to save Spiral from a flawed, ultimately unsuccessful attempt to revive a franchise that should have remained dead and buried a decade ago.

Do you feel this content is inappropriate or infringes upon your rights? Click here to report it, or see our DMCA policy.
Book of SawChris RockDarren Lynn BousmanMarisol NicholsMax MinghellaSamuel L. JacksonSpiral