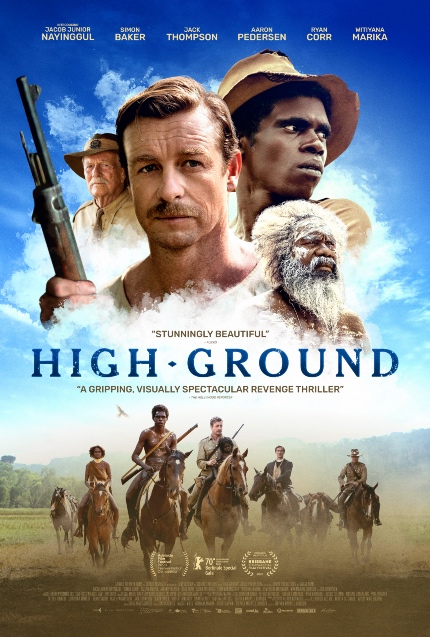 A massacre breaks out in the middle of a peaceful family gathering. Twelve years later, justice must be served.

High Ground
The film is On Digital and On Demand May 14, 2021, via Samuel Goldwyn Films.

In 1919, three people stalk their prey in a pleasant, sparsely populated, wooded region of Australia. Warm family feelings abound, even before they return to a larger gathering of their people near a river. Little do they suspect that they are being stalked by a group of white military men. One mistake later, shooting breaks out and soon 17 people have been murdered, including the family of young Gutjuk.

Twelve years later, Gutjuk (Jacob Junior Nayinggul), now called Tommy by his adoptive parents Travis (Simon Baker) and Claire (Caron Pistorius), appears to be well settled and relatively happy. Little does he suspect that his life will be overturned by a chain of events linking back to that childhood massacre.

In that massacre, Travis was stationed on the high ground above the camp, and watched helplessly as his fellow soldiers began firing upon the defenseless people, against orders. Repressed anger and prejudice can be easily released by panic, which seems to be what happened to the soldiers. Nonetheless, Travis acts to defend the survivors, even though that includes killing a couple of his fellow soldiers, and rips apart any kinship he might have felt with them, notably the nasty-edged Eddy (Callan Mulvey).

With that backstory in mind, the ensuing events are weighed down by the likelihood that awful things are surely destined to occur to all involved as a direct result of the deadly massacre. Perhaps inevitably, High Ground can't help but feel like a requiem for the dead, especially with the passage of time.

Travis is an Australian who recognizes that he is in the wrong for what he has done in the past. He carries the burden wearily, though he won't let it stop him from doing what he should do in the here and now. Simon Baker gives a modest performance, never leaning too hard on any possibility that he is a heroic person, which makes his character all the more appealing.

In his first film role, Jacob Junior Nayinggul embodies Gutjuk as a man who was raised among white people, yet realizes instantly where he belongs. (And it ain't with the white people.) For his part, he never leans too hard on the idea that his character is somehow heroic, or more righteous, than anyone else. It is, though, time for him to come of age, now that he's given the opportunity to do so.

The great Jack Thompson provides ballast as Moran, a senior military officer who is thoroughly convinced that the Australian government has somehow earned the respect and blind obedience that it is demanding from the people who have always inhabited the land. He will brook no disagreement with his perspective. The entire cast is quite good, including Sean Mununggurr as Gutjuk's dynamic uncle Bayware, Witiyana Marika as Gutjuk's reasonable grandfather (and strong paternal leader of the clan), and Caren Pistorius as the firmly empathetic Claire.

Compelling throughout, High Ground reminds and reprimands. These events and the characters depicted are fictional, but they feel unmistakably authentic. And the consequences continue to reverberate, down to our day.

Do you feel this content is inappropriate or infringes upon your rights? Click here to report it, or see our DMCA policy.
AustraliaJack ThompsonJacob Junior NayinggulSimon BakerStephen Maxwell Johnson