Review: BENNY LOVES YOU, Hell Hath No Fury Like This Rag Doll Scorned 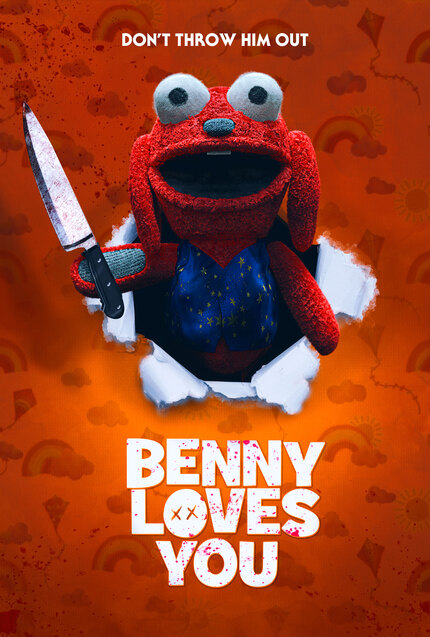 A delightfully daft microbudget slapstick gem, Karl Holt's Benny Loves You is a raucous toy-gone-wild portrait of a man desperately fighting to grow up is a ton of fun. Largely stuck together with tape scraps and chewing gum, Holt's feature debut is an anarchic blast of I-don't-wanna-grow-up mayhem about a man desperately fighting to put away childish things and move forward. Unfortunately, one of those childish things has other ideas.

Jack (Holt) is still living with his parents in his mid-30's, and by the look of his bedroom - walls still plastered with pop culture posters and shelves overflowing with action figures - he has no intention of changing that. He's underperforming at his job as a toy designer, constantly outshined by a snobbish robotics prodigy named Richard (pronounced Rih-SHARD, played by George Collie), and inability to rise above his own mediocrity sees his position at Toy Box (his rather uninspiringly named workplace) in peril.

When a Final Destination-esque calamity kills his parents as they are setting up his birthday party, Jack falls into a deep depression, which leads to the near repossession of the family home. The sudden rush of responsibility - and a crush on his workmate Dawn (Claire Cartwright) - forces him to take stock of his life and make an earnest attempt to get it together. The first victims of his purge of totems of childhood are his toys, among them, a goofy looking rag-doll named Benny, who looks like a direct cross between Kermit the Frog and Elmo, with the latter's voice.

Little does Jack realize that Benny is much more attached to his master than his master is to him. Resentful of his relegation to the trash bin of history, Benny crawls out and decides that he needs to help Jack by violently disposing of anyone or anything that gets in his way. And a lot gets in Jack's way.

What follows is an absolute explosion of puppet violence, all played to the hilt by a very game cast in what is necessarily a very silly film. Jack and Benny have a very hot-and-cold relationship, with the former alternately appreciative and even inspired by Benny's enthusiasm as they work together in one of the film's most inspired sequences to create a new line of Skare Bear slasher-inspired toys to save Jack's job in a glorious makeover montage.

When Benny Loves You is hitting on all cylinders it's an absolute riot, the janky animation/puppeteering of the titular doll is too ridiculous not to be endearing. The go-for-broke nature of the film's copious gore is sure to please splatter fans in both the volume of creativity of the kills.

Where the film could be said to falter is in the occasionally interminable minutes between these set pieces. Benny Loves You is trying to tell a coming of age story, and it sometimes works pretty well, however, when the very broad comedic tone is diverted from the violence to the odd interaction between Jack and his coworkers or a pair of bumbling Keystone Kops investigating Benny-related disappearances, it's harder to stomach. It's far from a deathblow to the film's inertia, but it does sap a bit of momentum and goodwill built by Benny & Jack's odd couple relationship.

With a cast of around a dozen and a crew of half that, Benny Loves You is a true indie effort, with writer/director/cinematographer/editor/star Holt taking on the vast majority of the work and responsibility for making the thing work. Thankfully, when taken as a whole, Benny Loves You is successful in reaching Holt's aims of being an over-the-top goofy/gory fun time in which a murderous rag doll fights an antagonistic toy robot to the death, and that's just one small part of a truly insane finale that helps to make some of the wonky humor fade from one's memory as the end credits roll. It's a damn fun time, and gorehounds with a sense of humor should give it a shot.

Do you feel this content is inappropriate or infringes upon your rights? Click here to report it, or see our DMCA policy.
Karl HoltClaire CartwrightGeorge CollieJames ParsonsComedyHorror