Dee Bradley Baker and Michelle Ang star in the animated adventure, now streaming on Disney Plus. 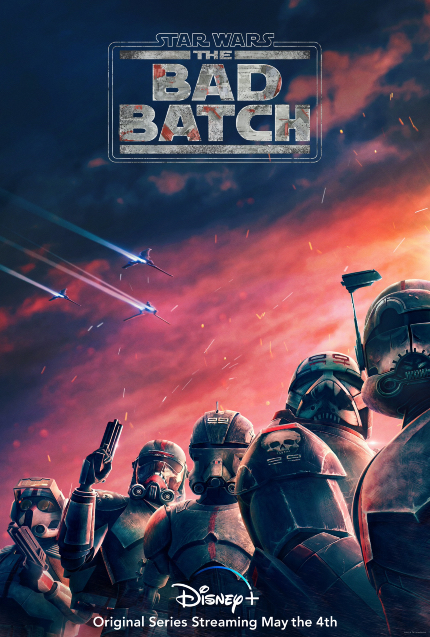 The Bad Batch, minus one member, has now added Omega (Michelle Ang), who brings an age-appropriate awe and wonder to her first scene, as the team lands on a planet that is not her own.

Renewing contact with old friends, a married couple and their children, opens up a possible pathway for the team to accomplish their mission. It also allows Omega to encounter other age-appropriate children, while allowing certain team members to reveal new facets of their personalities.

"The Bad Batch," as they are known, were first introduced in the final season of The Clone Wars. They are a group of clones who appear to be defective, though each displays a certain capacity for mayhem and mischief, revolving around a distinctly different 'special' power. They form a clutch of miscreants who are bent on disobedience and disrespect, but ultimately are centered by their good-hearted inclinations. (This strikes me as a variant on the 'prostitute with a heart of gold' trope, only twisted for a family-friendly audience).

Having Omega at the forefront of this episode suggests that she will play a central role in the series going forward. Lucasfilm has long pursued a youthful audience, and this particular episode certainly fulfills that intention, while not insulting the mental or emotional intelligence of older teen or adult viewers.

Created by Dave Filoni, who is certainly an expert in all things Star Wars, the series already suggests multiple, pleasing variations on what has come before. It's a sweetly smart approach, showcasing new characters, new worlds, and new enemies in the younger days of the evil Galactic Empire, still developing its own rules of engagement and eventual oppression against its people. I noticed several narrative strands that are introduced and left open for further development, which I assume is intentional and potentially compelling.

The second episode felt even more like a traditional, live-action adventure than the first episode, taking good advantage of the expanded possibilities of an animated universe. It also benefits from its running time; at 28 minutes, this episode flew by, while still including a generous amount of action.

Do you feel this content is inappropriate or infringes upon your rights? Click here to report it, or see our DMCA policy.
animationDave FiloniDee Bradley BakerLucasfilmMichelle AngStar WarsThe Clone WarsUS