Coming This Summer: THE TRANSFORMERS: THE MOVIE Gets A 4K UHD Upgrade From Shout! Factory 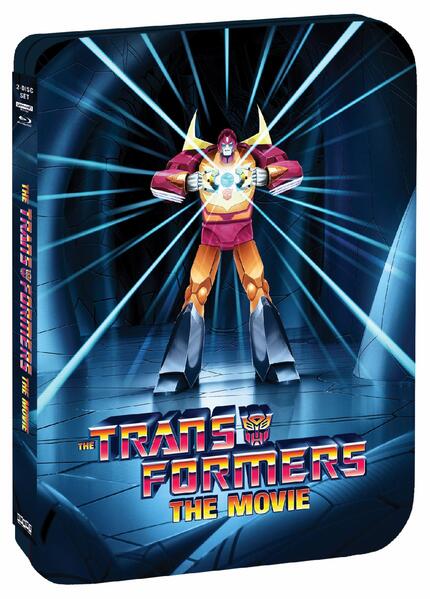 Beginning this August, The Transformers: The Movie is getting a 4K UHD facelift from Shout! Factory in a pair of new releases sourced from newly struck transfers and featuring brand new supplements.

The film holds a special place in the hearts of many film fans of a certain vintage - myself included - and this upgrade aims to be worth yet another purchase. In addition to the new 4K UHD presentation, Shout! Factory is also including a new feature-length storyboard comparison and a 30th anniversary celebration from Fathom Events, both exclusive to the new release, as well as porting over supplmemental material from their previous releases of the film.

The Transformers: The Movie will be available first as a limited edition Steelbook on August 3rd, then as a standard UHD disc on September 28th. Check the link below for purchase options. In the meantime, here are the specs for this upcoming release:

THE TRANSFORMERS – THE MOVIE 35th Anniversary Edition
Featuring the newly restored movie from a new 4K transfer of original film elements
Special Bonus Content:
·        *New Feature-Length Storyboards, including deleted, alternate and extended sequences
·        *New Fathom Events 30th Anniversary Featurette, including Stan Bush’s acoustic performances of “The Touch” and “Dare”
·        ‘Til All Are One – A comprehensive documentary looking back at THE TRANSFORMERS: THE MOVIE with members of the cast and crew, including story consultant Flint Dille, cast members Gregg Berger, Neil Ross, Dan Gilvezan, singer/songwriter Stan Bush, composer Vince Dicola and others!
·        Audio Commentary with Director Nelson Shin, story consultant Flint Dille and star Susan Blu
·        Featurettes
·        Animated Storyboards
·        Trailers and TV Spots
*exclusive to the Limited Edition SteelBook and 4K UHD releases
Movie Synopsis:
The AUTOBOTS, led by the heroic OPTIMUS PRIME, prepare to make a daring attempt to retake their planet from the evil forces of MEGATRON and the DECEPTICONS. Unknown to both sides, a menacing force is heading their way – UNICRON. The only hope of stopping UNICRON lies within the Matrix of Leadership and the AUTOBOT who can rise up and use its power to light their darkest hour.  Will the AUTOBOTS be able to save their native planet from destruction or will the DECEPTICONS reign supreme?