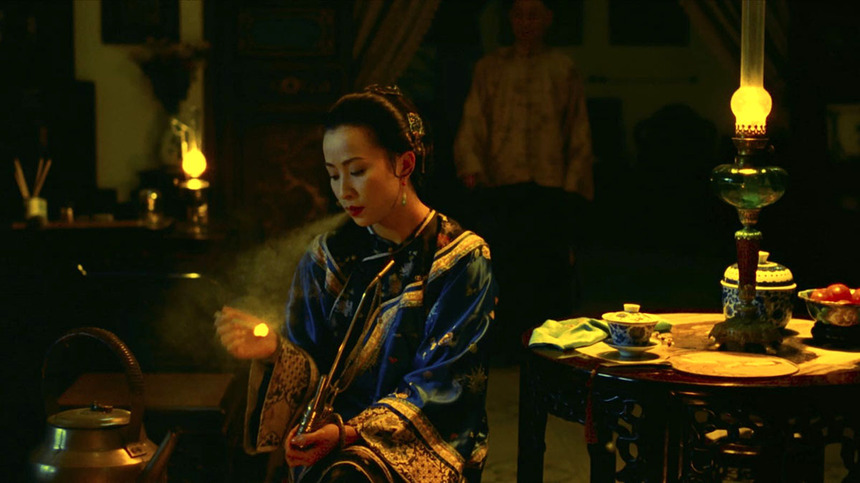 Shot like a dream made real, unbound from nominal signposts of the passage of time, and so thoroughly absorbing that it will linger in the mind long after its final fade to black, Hou Hsiao-Hsien's Flowers of Shanghai joins the Criterion Collection this week at spine #1077.

It's frankly incredible to me that it's taken 1077 editions for Criterion to reach Hou's work. He seems to be entirely central to their nominal beat: a major figure in both the New Taiwanese Cinema and an arthouse mainstay whose 2015 wuxia study, The Assassin, was named the best film of 2015 by Sight & Sound. Hou's early work, mid-career work, and late work all pulse with powerful, almost primal, energy -- an energy that is all the more surprising for how demure and somnambulant the films can seem at first blush.

As an entryway to Hou's work, Flowers of Shanghai, too, is an odd choice. The director is the first to admit that the film represents a substantial shift in both style and setting for him, and Flowers is rigorous in its bending of cinematic language and narrative tools to create a lasting emotional effect.

We spend the film's two hours in the company of three courtesans in the British concession in Shanghai in 1884, as each works to create some measure of improvement for herself in the cosseted confines of their roles. Emerald (Michelle Reis, shortly after her powerful appearance in Wong Kar Wai's Fallen Angels) is attempting to buy her freedom. Pearl (Carina Lau) mediates the rivalry of two junior courtesans in her house, one of whom is leading a naive rich boy down the garden path.

The film's focus, however, is on Crimson (an exceptional Michiko Hada, dubbed in Suzhou by the late Pauline Chan) and her longstanding affair with a bureaucrat named Wang (Tony Leung Chiu-Wai).

Though the sex work of the period (and in the film) is much less visibly sex work than an elaborate, quasi-romantic courtship fantasy for the men, whose arranged marriages never provided for something as quotidian as falling in love, the struggle between Crimson and Wang plays out as a near-mute game of deception and domination, as each comes to suspect that the other is unfaithful.

Although Hou and screenwriter Chu T'ien-wen significantly winnow down the interlocking relationships and threads of the novel that the film is based on, a first-time viewer (like me!) would be forgiven for having a notepad handy to jot down some of these key players, and the lines that connect them. (I haven't even mentioned Master Hong, who drifts in and out of all storylines as part-time advisor, part-time translator, part-time puppetmaster of the passions and prejudices of the women.)

It's Hou's approach to this story that transcends the narrative and leaves a lasting, visceral impression. With his cinematographer, Mark Lee Ping-Bing, the world of the flower houses is conjured in citron lamplight and gently floating medium shots that seem to hover, like an unseen observer, at the edge of every conversation, glancing at characters and catching unspoken beats as rituals of feasting and conversation play out.

Each sequence is composed in a loosely choreographed long take, resulting in a feature that is barely 40 shots in total. Vaguely echoing Martin Scorsese's parallel fin de siècle tragedy of social customs, The Age of Innocence, much of the melodrama takes place in the smallest emotional concessions, witnessed between the characters -- until, of course, those emotions inevitably, and painfully, explode.

Hou's blocking for camera is worth studying all on its own, as it can seem deceptively repetitive through much of the first half of the picture, until a sequence that creates a masterful -- and startling -- work of staging in depth, when half of a party of regulars rushes to the deep background to observe some unseen fracas on the street outside.

Perhaps, at this point, we realize that we've never left the flower houses, nor have we seen any real indication of the passage of time or of the world beyond; as though locked in a casino, time itself has ceased to intrude into the reverie.

When daylight does make a pair of subtle entries into the image at separate points in the film, its meaning is thematic and elegeic. We might also realize, by this point, that the characters are almost always high, dragging endlessly on opium pipes that further dampen and muddle their already-muddled hearts.

Presented in what is now Criterion's de facto 4K restoration (downconverted to Blu-ray), the disc looks superb, with rich colour and a high fidelity grain structure that convincingly renders the oily glow of the western lanterns. There are also three video featurettes supplied: an introduction/summary by critic Tony Rayns (who spends about 15 of his allotted 30 minutes recapping the plot for those who didn't get it; his overview of Hou's career at the top of the featurette is more valuable), along with a 2015 interview with Hou and a documentary assembled from behind-the-scenes footage from the Flowers of Shanghai shoot.

In a rare feat for a Criterion release, the printed matter is arguably more insightful than the video content. Jean Ma's jacket essay is excellent, and positions Flowers within the contemporary concerns of Hou's prior Taiwanese cinema.

Even better, there is a detailed and lengthy written interview with Hou from 2009, conducted by Michael Berry, which nicely chronicles the key aspects of the film, including the decision to shoot the film in Suzhou rather than Mandarin, which drove several casting decisions.

We also get a few mentions of the film Hou had been trying to make when he decided to make Flowers of Shanghai instead: a period picture about Zheng Chenggong, the son of a Chinese pirate and a Japanese noble, who rebelled against the Qing dynasty in the 1600s and pushed the Dutch out of Taiwan before losing himself in the pleasure houses on the Qinhuai River. Admit it, you want to see Hou make that movie, even now.

Do you feel this content is inappropriate or infringes upon your rights? Click here to report it, or see our DMCA policy.
Hou Hsiao-HsienThe Criterion CollectionTony Leung