Yes, Daniel Day-Lewis' age makeup from this 1993 film perfectly matches what he looks like now. 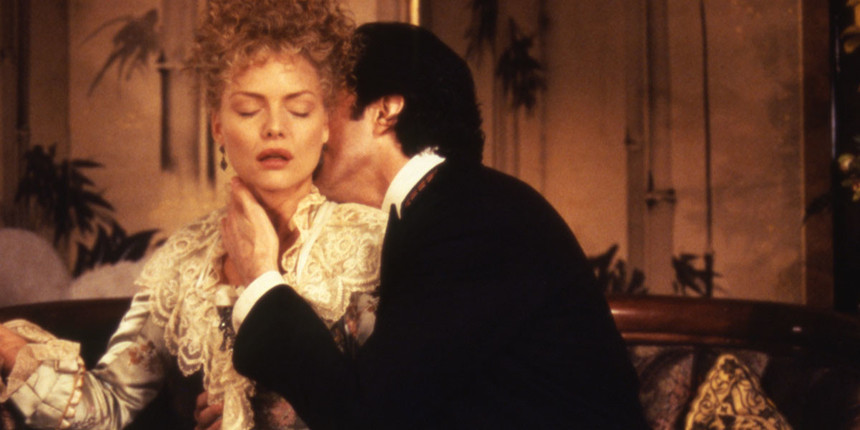 Timed to coincide with the end of the theatrical run of Daniel Day-Lewis' "final" performance in Phantom Thread (a retirement claim I will take to heart approximately 20 years from now), Martin Scorsese's 1993 period romance The Age of Innocence joins the Criterion Collection this week in a lavish 4K transfer. The film has remained my favourite of Scorsese's work since its debut a quarter-century ago, a transcendent piece of mannered savagery whose wars of unspoken words land as brutally as the bullets of Goodfellas and the fists of Raging Bull.

Newland Archer (Day-Lewis) is a young American aristocrat and all-around dim bulb who is about to be married to May Welland (Winona Ryder), who makes Newland's wattage seem bright by comparison. They are vapid people in a vapid time, dutifully navigating an arcane and ritualized, wealthy society that expresses itself in the furnishings of a drawing room or the choice of cutlery sets for a coming-out dinner.

Chaos intervenes in the form of the Countess Ellen Olenska (Michelle Pfeiffer, in one of her finest performances), another socialite and childhood companion of Newland's, who has returned from Europe having fled a broken marriage with a somewhat more loose (read: progressive) approach to the ossified rules of New York. Ellen wakes something in Newland that can neither be denied nor pursued, and the couple stifles in agony as the machinery of the world around them grinds their passion to dust.

Skillfully adapted from the Edith Wharton novel by Jay Cocks, The Age of Innocence translates Wharton's wry narrations about the social strata of New York City by way of an adroit running commentary by Joanne Woodward, whose amused observations about various Manson-Mingotts, Lefferts and Van Der Luydens come with a warm smile and a faint whiff of acid. In many ways, The Age of Innocence is a desperately funny film, openly mocking the manners of people who have literally nothing else, and anticipating Titanic (of all things) in its portrait of a gilded world so fragile that all those within it seem within a stone's throw of doom.

It's also something else, of course: Martin Scorsese's sole, full-throated romance. The Age of Innocence was quite a pivot in 1993, after a decade of amiable thugs, muscular apostles and misanthropic night-owls.

Naturally, Scorsese sinks into this change of climate as though he'd been there all along; his cinephilia is on fine display. The director has written himself a license to play in Powell and Pressburger's sandbox, richly recalling The Red Shoes with The Age of Innocence's painstaking production design, costumes, and vivid splashes of colour. An early quarrel blooms out to screen-filling red; an entire hothouse worth of flowers decorate various social engagements (and the film's opening credits by Saul Bass). Cinematographer Michael Ballhaus (The Last Temptation of Christ; Goodfellas) paints in smouldering embers and over-bright summer skies, and editor Thelma Schoonmaker's swooning dissolves press lovers together where real life cannot.

The costume design gets underlined on Criterion's Blu-ray, with a newly-recorded 20-minute interview with designer Gabriella Pescucci, who (charmingly) acknowledges the enormous influence of Visconti on both the film and Scorsese, and also dismisses that influence as generally overblown. Production designer Dante Ferretti, the name-drop king of the universe, is also interviewed, and manages to mention his associations with Fellini, Leone and Gilliam in the space of 30 breathless seconds.

A rat-a-tat interview with Scorsese himself is also present, and stands in for the more traditional commentary track. (With the speed at which Scorsese discusses his approach to The Age of Innocence, you get nearly a feature's worth of information for a commentator speaking at a normal rate.) The disc also includes an archive copy of Innocence & Experience -- no, not the U2 project, thank goodness, but rather, the HBO "making of" featurette from 1993.

The Blu-ray gives us a solid examination of the making of one of Scorsese's first real outlier projects, but the most appealing aspect of the release remains the film itself. Arriving amid a rush of Merchant-Ivory period films in 1993, I've long had the sense that The Age of Innocence never entirely earned its due when it was released. It's a masterpiece of worldbuilding and the technical crafts of film, and of using the language of cinema to explore and explain how civilizations live within codes. And it is also, of course, devastatingly romantic -- a heartbeat strangled by a corset.

Do you feel this content is inappropriate or infringes upon your rights? Click here to report it, or see our DMCA policy.
CriterionDaniel Day‑LewisMartin ScorseseMichelle PfeifferWinona Ryder