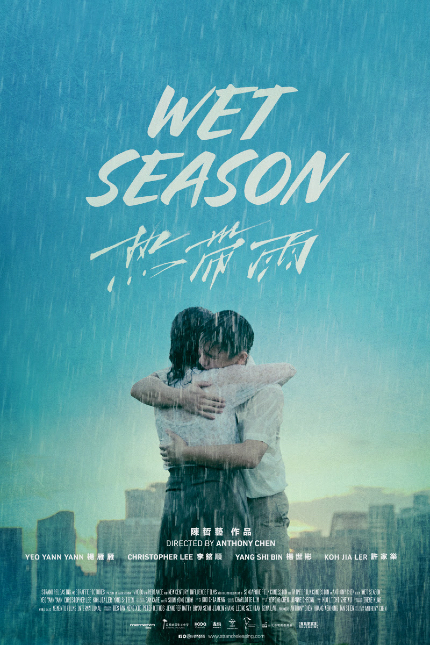 Singapore director Anthony Chen returns after six years with his sophomore feature Wet Season. His first film Ilo Ilo (2013) is a tender, masterfully shot race-class drama set during the 90s Asian recession. It follows a Malaysian native maid and her role in a Singaporean household with precision period detail. In Wet Season the lens is more focused this time 'round, focusing on a unique relationship and power dynamic, far more understated and tender in its critique of ethnic relations in the time of the mid-2000s.

Malaysian-Chinese immigrant Ling (Yann Yann Yeo) teaches Mandarin, looks after her workaholic husband’s invalid father (Shi Bin Yang), and has been trying for eight years to conceive a child. Dissatisfied, she rarely shows it, hiding her resentment and sadness under a repressive day-to-day grind as she moves daily between working and living space with no time or energy for interests, hobbies or socialising.

When some of her class need remedial lessons, she develops a unique friendship with a student Wei Lun (Jia Ler Koh), the only one to take the work seriously due to his distant parents' future expectations that he work for a Chinese firm. Ling and Wei Lun form a bond due to mutual respect and basic compassion, but as the monsoon season intensifies, Ling’s simmering resentments and frustration change everything.

Unsurprising for a Camera d’Or winner, Anthony Chen applies the same near-obsessive, yet elegant attention to detail and framing in Wet Season. The day-to-day is vividly brought to life as the heat and rain assault the city, and the fashion, technology and mindset of the mid 2000s instill every scene. There are strikingly composed shots of the banal too.

For example, there are two different scenes of people eating durians, but each is so uniquely framed as to be quite memorable and meaningful. Later, a dramatic moment uses a car’s rear view mirror to perfect effect as Chen uses the sequence to build the interior drama throughout the film; focusing on Ling’s reflected expression of anguish as the rain pelts the car outside. Livelier scenes, such as a Wushu competition and a school fight, use a single-pan camera technique, as well as a brief but captivating dream sequence.

The inherent difference between citizens and ‘the other’ is a theme Anthony Chen conveys effortlessly yet again also. The repressive downfall of the rain is metaphorically suffocating Ling. She wants a child but her husband's frozen sperm and disinterest prevents this. At other turns she is belittled by society; fellow teachers that look down on her Malaysian background, the Mandarin she teaches not being taken seriously, even her family asks why she hasn’t applied for a passport yet. The simmering anger and resentment also defines itself in other ways. Malaysia is caught up in violent demonstrations and in Singapore passive aggressive patriarchal politics play out to disrupt Ling’s life.

The small cast of characters is excellent in Wet Season. Her husband (Christopher Ming-Shun Lee) is borderline-despicable, and his absence speaks volumes. Small gestures of kindness from Shi Bin Yang as the ailing father who is immobile is another praise-worthy aspect of this film as the actor does a lot with so little.

Likewise, Jia Ler Koh says so much with a dismissive shrug or violent reaction as the conflicted student with absent parents Wei Lun. There is a genuine sense of compassion the cast generates throughout. “Friendship is like a warm hand” Mrs. Ling teaches Wei Lun to write in Mandarin, and it is this ideal connection that distinguishes Wet Season from the typical coming-of-age or teacher-student relationship tropes.

Regardless of what does eventuate in Wet Season, it arrives there naturally, with the weather, and with enough justification that the resolution brings all themes and unsurfaced drama to a near-perfect high. Ilo Ilo captivated me when I saw it at the time, and Wet Season definitely retains that sense of immersive slice-of-life drama, confirming Anthony Chen as one of the great auteurs, the likes of Edward Yang.

Review originally published during the Melbourne International Film Festival in August 2020. The film will open on April 23 at the Village East by Angelika in New York City, and then expand to theaters, Virtual Cinemas, and Premium Video On Demand in the U.S. on April 30 via Strand Releasing.

Do you feel this content is inappropriate or infringes upon your rights? Click here to report it, or see our DMCA policy.
Anthony ChenJia Ler KohSingaporeYann Yann YeoChristopher Ming-Shun LeeShi Bin YangDrama