Despite dominating multiplex screens, cable, and streaming for more than a decade, spandexed superheroes have shown incredible staying power. They're here to stay for the foreseeable future and most probably beyond.

We can fast-forward 10-15 years and, little is likely to change, though there’s a good chance we’ll begin to see superheroes who look more like everyday people than the current batch of Marvel and DC superheroes, where spending six months to a year in an intensive psychical training program with an on-call personal trainer and a home-based chef is a prerequisite to slipping into a form- and body-fitting spandex costume. Thunder Force, the latest unsurprisingly bland, derivative, limp comedy from comedy star Melissa McCarthy and her prolific writer-director husband, Ben Falcone (Superintelligence, The Boss, Tammy), at least points viewers in the right direction idea-wise, though it’s unlikely to serve as the series- or franchise-starter McCarthy and Falcone desperately want it to be.

There’s more raw, unfulfilled promise in Thunder Force’s central premise, though, beginning with the not unfamiliar comic-book idea of a world ruled, if not outright run, by super-powered supervillains. A double or triple prologue sets up the world-upending, mutant gene-activating event that gave certain, sociopathic individuals superpowers, but no one else, leading to a curiously unchanged world with just a handful of semi-innocuous supervillains, modest property loss, and at least for one of Thunder Force’s key characters, Emily Stanton (Oscar-winner Octavia Spencer), the tragic loss of her geneticist parents due to an untimely encounter with an unspecified supervillain, which in turn leads to Emily’s lifelong obsession with activating superpowers in non-sociopaths to combat the supervillain menace.

For Emily’s onetime best friend, Lydia Berman (McCarthy), life as a 40-something adult isn’t particularly different from life as a preteen, teen, or young adult. Thunder Force races through Emily and Lydia’s friendship, from the first time they cross paths in a schoolyard, where Lydia steps in to protect Emily from obnoxious bullies, to high school, where Lydia’s near-superhuman lack of ambition or interest for anything except hanging out and metal music concerts predictably leads to Emily and Lydia's years-long separation and estrangement. Fast forward two-and-a-half-decades and Emily has become the epitome of entrepreneurial success: A billionaire inventor, CEO, and overprotective single mom to a brilliant, overachieving, friendless teen, Tracy (Taylor Mosby).

Lydia, of course, is anything but successful professionally or personally. She’s working-class through and through, making a living as a forklift operator while occasionally pining for the best friend she lost years ago. Their not coincidental reconnection occurs (no) thanks to their 25th high-school reunion, almost immediately followed by Lydia stumbling, fumbling, and bumbling straight into Emily’s super-secret, low-security experiment to create super-powered superheroes. She gets half of what Emily intended for herself: super-strength (Emily gets invisibility). Cue enervating 20-minute training montage with Lydia slowly (far too slowly) learning to use her superpowers in Emily’s high-tech gym/lab.

Whether due to a lack of imagination, resources, or both, Thunder Force repeatedly feels like too little for too long. Despite the supervillains rule the world premise, Thunder Force focuses exclusively on three, yawn-inducing supervillains, the Crab (Jason Bateman), Laser (Pom Klementieff), and leading mayoral candidate The King (Bobby Cannavale).

The Crab is half-man/half-crab, Laser can create and direct energy bolts in any direction, and The King seems to share Lydia’s super-strength along with an overwhelming desire to hug foes and henchmen alike. Of the three, the Crab gets the barest hint of a personality, if only because he becomes Lydia’s unlikely romantic interest while Laser gets the least (she’s a sociopath with a flair for fashion and slow walks). The self-titled King is just another narcissistic, power-mad supervillain with anger management issues and too many disposable henchmen at his beck and call.

That slapdash, surface-deep approach to super-villainy extends to what barely passes for humor or comedy in Thunder Force. Falcone sprinkles a not unusual assortment of stale pop-culture jokes into the proceedings presumably to offset Lydia’s evolution from zero to hero.

Along with a near-useless superpower, Emily barely gets a character arc of her own. She’s more superhero sidekick than superhero proper, usually hanging back and doing nothing while Lydia literally throws her weight around to take down low-level criminals at local convenience stores and bottom-tier supervillains in curiously empty office buildings. In the end, Lydia and Emily might save the day, but they can’t save Thunder Force from mediocrity. 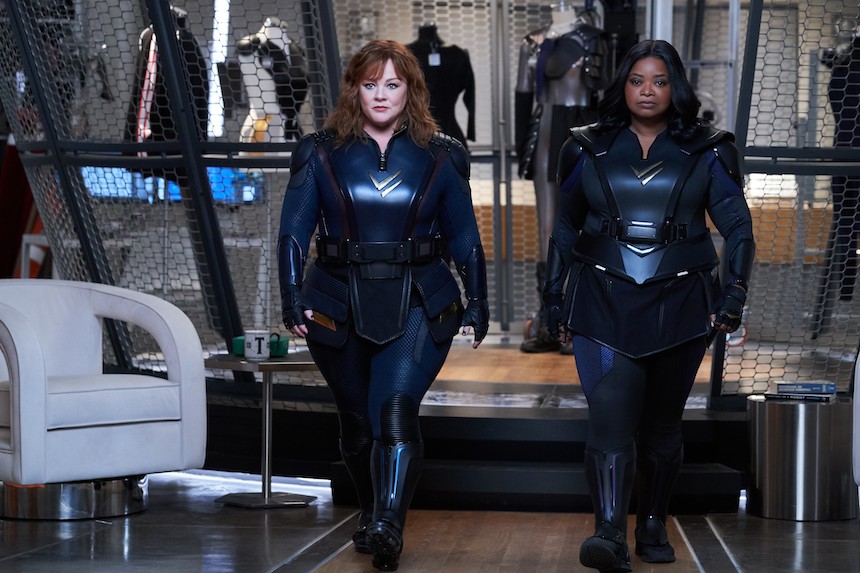