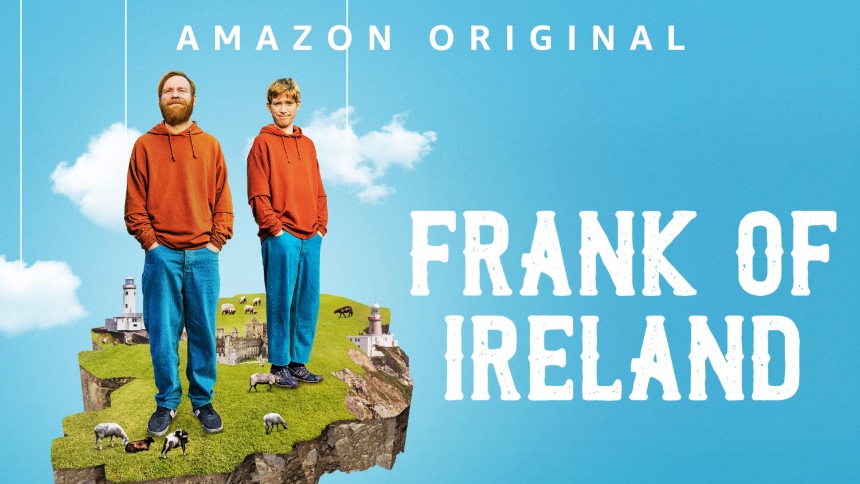 Living in a land of frank, funny delusion. Wait a minute, is this me?

Frank of Ireland
All six episodes will begin streaming on Amazon Prime Video as of Friday, April 16.

Frank should not be living at home with his mother.

It's not because he's too old, though anyone still living at home past the age of 30 inevitably raises questions. Rather, it's because he is an impossibly selfish, incredibly self-important, and disturbingly self-aggrandizing individual, entirely lacking any awareness or interest in how his actions affect his 'inner circle,' which includes his best friend, Doofus, his former girlfriend, Àine (Sarah Greene), and his mother, Mary (Pom Boyd).

What makes Frank of Ireland brashly comic and frequently hilarious is that the characters live in a land of frank delusion. They all walk around with blinders fully covering over any sense of propriety and/or decency, so that nothing can be taken seriously. The only question is, to what degree can the premise be pushed?

The question is answered over the course of six episodes in the series, created by Brian Gleeson, Domhnall Gleeson, and Mike Moloney. Brian Gleeson plays Frank and his older brother Domhnall Gleeson plays Doofus; the two brothers portray best friends with an easy camaraderie, a goofy sense of humor, great deadpan delivery, and a keen understanding that the series must revolve around Frank as the perceived center of his own universe, with everyone else arranged in orbit around him and his needs.

The series begins with a swear word, softly uttered, and the ensuing conversation confirms that the dialogue will be consistently profane and scatological to the nth degree. Each episode runs about 30 minutes or less, which feels about right. After all, how much ridiculous bluster can be tolerated before the hot air runs out?

That is the point, however, or at least one of the points, since the series also gnaws a bit on the idea that Frank refuses to grow up or to become any sort of adult. His 'inner circle' is no better, though perhaps not to the same deluded degree as Frank. They all cling to notions from their own childhood, declining to face reality and the need to change, adjust, and modify their own behavior. Instead, they'd rather be children and get what they want, and they want other people to sacrifice their own needs and wants in their favor, now, please, and I'm just saying "please" so I can pretend to be polite, because that's what people expect.

Even so, Frank and the other souls, lost in their selfish preoccupations, occasionally get a glimmer of how they should be behaving, perhaps, and give evidence of their capacity to change and -- gasp! -- improve for the better.

And then it's gone, with a rough-humored twist or two, and it's back to me! me! me!

Do you feel this content is inappropriate or infringes upon your rights? Click here to report it, or see our DMCA policy.
Amazon Prime VideoBrian GleasonDomhnall GleasonIrelandPom BoydSarah Greene