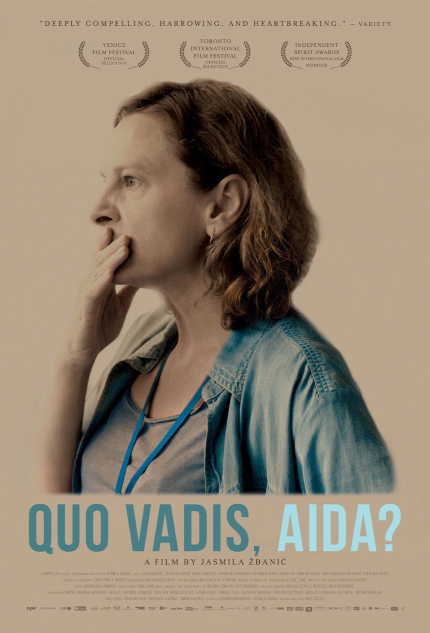 Jasmila Zbanic's Quo vadis, Aida? puts its protagonist, Aida (Jasna Djuricic), a middle-aged schoolteacher working as an English translator for the UN peacekeeping troops, in a very difficult position. The place is Srebrenica, Bosnia, the year is 1995 and the film is based on a true story. The Serbian troops' incursion is imminent. As in all wars, people have to make difficult choices to survive. The kicker of the film is that this life and death situation it depicts has actually taken place merely 26 years ago.

Considering an estimated 100,000 people killed, and 1.3 million displaced in The Bosnian War, I have to say right off the bat that the outcome in Quo vadis, Aida? is not a positive one. But it says a lot about how horrific the war actually was. And however well meaning the international interventions were, they were not at all prepared when faced with the humanitarian crises.

The setting and the story is pretty specific. Srebrenica, a town of 30,000 people, consists of mostly Muslim population. The shelling by the Serbian tanks has started. The Dutch UN troops confined to their camp just outside the town are completely impotent since the entire UN command in Europe seems to be on vacation. So their ultimatum to the Serbian troops to halt or face the air strikes become empty threats.

The snide Serbian commander knows its predicament and uses it to his advantage. Aida, working as a translator for the UN Command unit, sees that they are making promises to the townspeople they can't keep. The air strike never materializes. Once Srebrenica is taken by the Serbian army, all of the town's population seeks refuge in the UN compound. And the UN troops are not set up to deal with the unfolding humanitarian crisis , resulting in a shortage of supplies, food, water, fuel, and even toilets. All they can do is provide shelter for about 4,000-5,000 people on the concrete floor, and the rest camping out just outside the barbed-wire fences.

Aida, using her connections with the Dutch, brings her husband and two sons into the compound. Her husband, who is a learned man, will act as one of the civilian leaders to negotiate the terms with the two-faced Serbian general.

Things get dire as the Serbians dictate the terms of "moving refugees out of harm's way" by buses. Women get separated from their men, but no one knows if the buses are headed to where they were supposed to be headed. Some of the UN soldiers witness men being rounded up and executed. And some young women are dragged off by the Serbian army.

Quo vadis, Aida? is all about one woman's mission to save her family at all costs. It's her survival mode taking over and working overtime in a dire, life and death circumstance. It also is a searing indictment of war and the West's naiveté and hubris, as they believe in their own moral superiority, but are completely impotent when it comes to decision-making and action. Compellingly and deftly written and directed by Zbanic, the film moves along breathlessly to its tragic end.

It ends with Aida going back to Srebrenica to resume her teaching after some time has passed. Life is back to normal. Everyone is supposed to be friends and neighbors again. The film questions if this so-called peace is acceptable, if you recognize a parent in the audience at the school talent show is the same person who is responsible for the death of thousands people, including your family. Can you ever forgive him?

The film tries to make you understand the post-war Bosnian society, its fragile peace, its not so distant past and trauma and wounds not healed. Quo vadis, Aida? is a powerful, harrowing film with a stellar performance by Jana Djuricic in the title role. Highly recommended.

Originally published in connection with the film's U.S. release in March 2021. The film is now streaming on Hulu.

Do you feel this content is inappropriate or infringes upon your rights? Click here to report it, or see our DMCA policy.
Boris LerBosnia and HerzegovinaHuluIzudin BajrovicJasmila ZbanicJasna DjuricicOscarNominees