Quentin Dupieux' newest film is more lightweight than the fly featured in it. 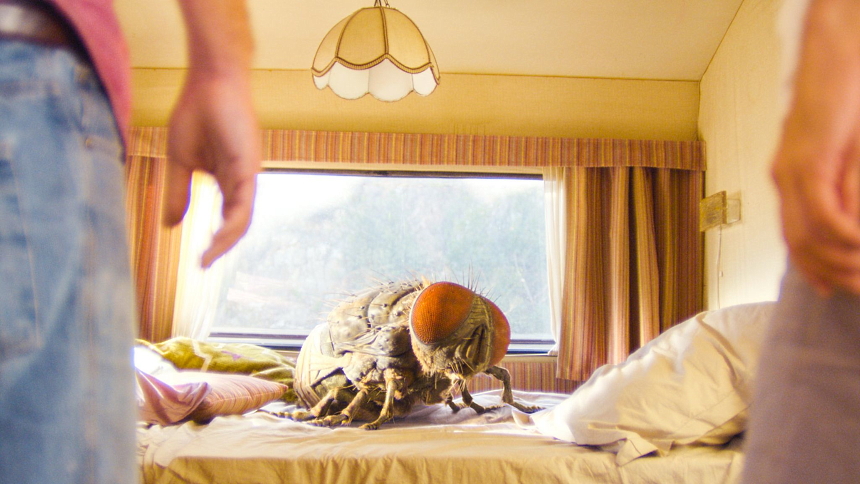 Writer-director Quentin Dupieux cannot be charged with choosing middle-of-the-road subjects for his films. Ever since he made a serial killer thriller about a living car tire with homicidal psychic powers (Rubber, for those interested...), there has been no predicting what he'll decide to write and direct next. At the International Film Festival Rotterdam his newest film Mandibles was shown, and guess what? It's basically Dumb and Dumber, only with a dog-sized fly. 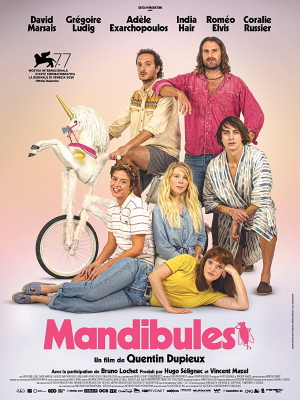 In Mandibles, Grégoire Ludig plays Manu, a clueless vagrant who we meet sleeping on a beach. A shady character offers him a business proposition: if Manu takes a mysterious package somewhere by car, he can make a lot of money. Manu agrees, but, having no car, he steals one, and discovers a gigantic fly in the trunk. In panic, he asks his friend Jean-Gab (David Marsais) what to do, and the two decide to try and teach the fly tricks, making money that way.

That's basically the beginning of a series of misadventures, in which the two dumb-asses roll from one absurd situation into the next. A case of mistaken identity provides them with a villa to live in, and much of the film juxtaposes the happy-go-lucky idiots against the rich hipsters whose holiday they crashed, while trying to keep the fly a secret from everyone.

While never all that likeable, Manu and Jean-Gab at least make for an amusingly childish couple. That's no surprise: the two actors have a long-running chemistry and have been paired up in films before. The fly is done well, and Adèle Exarchopoulos (of Blue is the Warmest Color fame) steals her scenes as a slightly brain-damaged resident of the villa.

Those looking for character growth need to look elsewhere. Quentin Dupieux is just having fun here at the sunny French Riviera, as do most of the actors. With only 77 minutes of length, the film manages to just reach the finish before its welcome runs out. And a moral? Nah. Absurd dumb fun may still be dumb fun, but it's also still fun. Rotterdam audiences thought so too, and awarded the film a rating of 3.7 out of 5.

Do you feel this content is inappropriate or infringes upon your rights? Click here to report it, or see our DMCA policy.
Quentin DupieuxGrégoire LudigDavid MarsaisAdèle ExarchopoulosIndia HairComedyFantasy