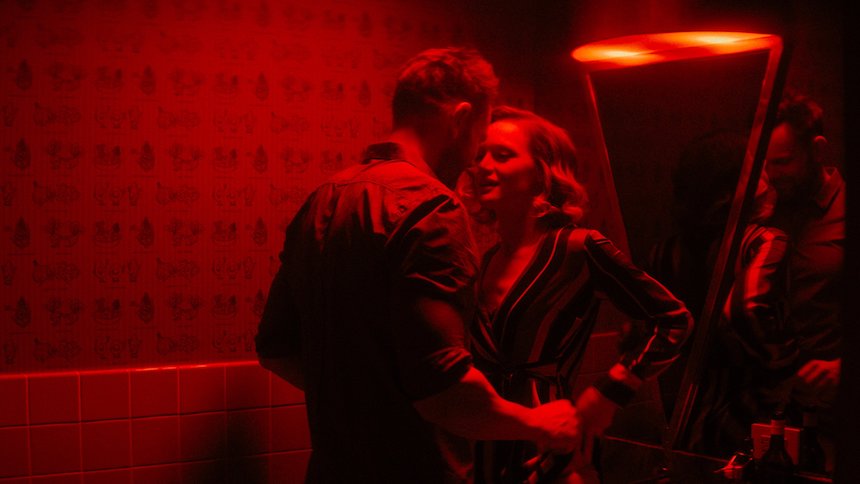 As a general rule, romantic comedies give audiences or viewers exactly what they want from the genre, ending with a central couple overcoming obstacles, setting aside manufactured differences, and embracing in joyful celebration of the “happily ever after” life they’ll live after the end credits roll.

Ending on a predictable high note, though, implies that maybe that happily ever after isn’t meant to last, at least not in a real world where romantic relationships tend to fade, not strengthen, with familiarity and time. That “happily ever after” idea, of course, depends on narrowly defining romantic relationships purely in carnal terms, but at least where romantic comedies are concerned, it’s rarely examined or explored in any depth, let alone critiqued.

For BenDavid Grabinski (Are You Afraid of the Dark?, Skiptrace), the “happily ever after” in his slyly subversive, darkly comic feature-length debut as writer-director, Happily, lasts as long as it takes for us as an audience to meet his central duo, Tom (Joel McHale) and Janet (Kerry Bishé), a blissful, ecstatically happy, borderline 40-something couple who’ve managed to live the second decade of their wedded lives like every day was part of an extended honeymoon. Fourteen years on and they still behave like hyperactive, hormonally driven teens, ever eager to engage in coitus regardless of the social setting or circumstance. Not surprisingly, their effusively upbeat mood, not to mention their unquenchable interest in sexual congress, make everyone around them, including several couples who they consider relatively close friends, absolutely, positively miserable.

That misery first reveals itself in an awkward dinner conversation involving Tom, Janet, and another couple, Val (Paul Scheer) and Karen (Natalie Zea), where Val and Karen forcefully disinvite Tom and Janet for an upcoming weekend retreat, citing Tom and Janet’s social custom-breaking behavior and more importantly, how it makes Val, Karen, and their other friends feel and it’s not good. That disinvite, however, turns into a re-invite after a man in black, Goodman (Stephen Root), makes a visit to Tom and Janet’s house, promising cold hard cash in exchange for socially sanctioned, non-sexual normality (i.e., marriage without sex). Janet’s inadvertent reaction to Goodman’s proposal to change the status quo, however, leads to major, surreal-level complications for the couple, complete with a not-so-deep, dark secret that hovers over them like a toxic cloud.

That injection of surreality inverts back to a seemingly realistic, naturalistic environment when Tom and Janet arrive at a modernist mansion for a weekend retreat that includes Val and Karen, the downwardly mobile Patricia (Natalie Morales) and Donald (Jon Daly), a married lesbian couple, Carla (Shannon Woodward) and Maude (Kirby Howell-Baptiste), and Richard (Breckin Meyer) and his new fiancee, Gretel (Charlyne Yi). Almost immediately, casual and not-so-casual resentments and animosities surface, proving — as if further proof is actually needed — that hell is not just other people, but other people stuck at a weekend retreat with no way out except through an intense couples-only confessional session.

Much to his credit, Grabinski rarely makes the obvious or over-obvious choice story-wise, periodically teasing out elements of the central mystery, adding ominous grace notes visually through the cold, antiseptic environs of the mansion and Joseph Trapanese’s Vangelis-inspired music score and perfectly timed, often hilarious ‘80s needle drops. Grabinski also smartly leans on a uniformly talented, game cast to add depth and shading to acerbic, caustic dialogue. Eventually, of course, Grabinski has to provide answers both to the central mystery (literal or metaphorical, real or surreal) thematically linked to Tom and Janet’s extraordinary marriage and what it and they say about modern expectations, romantic relationships, and adult friendships.